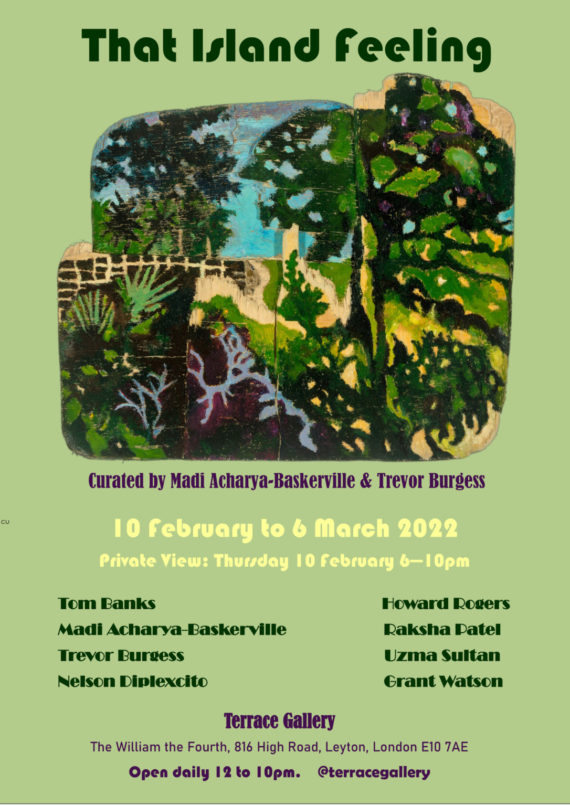 That Island Feeling: is it to be hemmed in by the encircling sea, stifled, isolated? Or is it to gaze on a boundless horizon of dreams across the water, constantly seduced by the promise of an elsewhere? This is a group exhibition of paintings by Tom Banks, Madi Acharya-Baskerville, Trevor Burgess, Nelson Diplexcito, Howard Rogers, Raksha Patel, Uzma Sultan and Grant Watson which reflect feelings swirling around the sense of place on these islands of Britain at the current time – a time with so many debates about restrictions on who can travel and to where, who belongs and who doesn’t. The paintings do not address this in any direct way, but instead give attention to visual experiences of place that subtly interlace here and elsewhere. Elsewhere, for the islanders, may be far enough away not to arouse neighbourly feelings. Far enough away to dream of visiting and bringing back souvenirs. Far enough away not to need to think about it. Far enough away to block it out. But for these artists, elsewhere is also here and real – a lived experience to be shared. And the islanders’ everyday familiar reality on British streets, (so familiar as not to be noticed or thought about, so familiar as to be blocked out of mind) seen with the eyes of elsewhere, may lodge in the mind like an exotic souvenir. Artists can make things visible that are not seen. These are artists who look closely at the places that are closest to them with eyes attuned to other possibilities, seeing things that are not seen. They are artists whose identity is bound up with other places, for whom the vivid reality of elsewhere is a real and familiar ingredient of “that island feeling”.

Madi Acharya-Baskerville is an artist based in Oxford