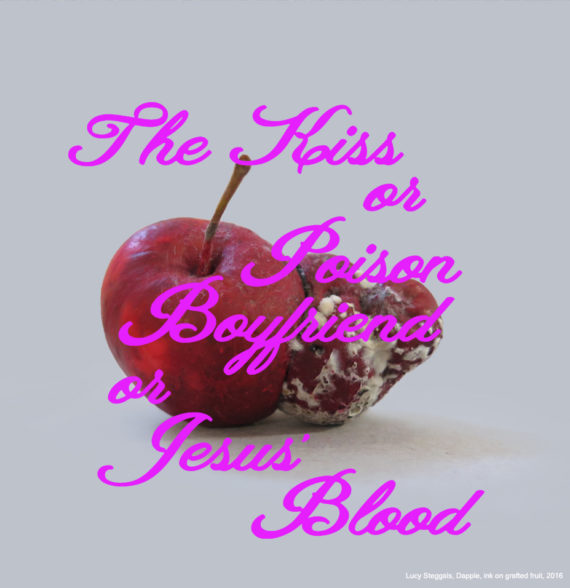 The Kiss or Poison Boyfriend or Jesus’ Blood
Printmaking has long been lionized as a quintessentially democratic art form. Devoid of a unique and uniquely prized object, prints can be produced in multiples and disseminated broadly and at relatively low costs. This wholesome and rose-tinted celebration of print’s virtue is naïve and ignorant. Not only does it presume a sufficiently (but not too) affluent audience to domestically purchase and treasure these inked, stained or inscribed papers. This attitude also, and fundamentally, fails to grasp print’s insidious, corrupting and anarchic technology.
It is the scab of this insidiousness that this exhibition seeks to pick at. And it does so by exploding the traditional forms and distribution strategies of printmaking as metaphor (a symbolic ‘other’), and as synecdoche (complicit and internalized).
A plate, or a block, or a stone is inked and wiped so that an oily pigmented grease remains, fresh and wet. That potent surface – cumbersome and smelling of old machines – is brought slowly into contact with a pristine substrate; a snow-white paper, or a raw canvas, and then pressure is applied. Often very great pressure. The spent plate, or block, is then removed leaving the receiving substrate scarred with an image of this impact.

Untethered to intaglio print technologies, and unprepared to simply replace them with our own digital surrogates, this exhibition is instead interested in the intimacy and corrupting potential of touch. Touch is an event. It is the coming together of two bodies, and as that event occurs, a causality is set in train – and the toucher cannot get it back. The half-brick has left the hand and is now hurtling toward the window. The rolled-up shirt cuff has fallen unchecked into the bleach bucket.

The Kiss or Poison Boyfriend or Jesus’ Blood snares the moment of influence as a painter thumbs another artist’s monograph in the studio. It freezes and makes conscious the pass of an index finger across the screen of an iPhone, or a Sharpie across a fashion magazine page. It captures the bloom of a saturated dye, staining by capillary action, an unprimed cloth. It enacts the vulnerability of a painting’s constituent parts held in place by the gunky glue of its own paint alone. It traces the golden repair of Kintsugi pottery. It checks the connection of an embrace and mourns the pathos of the unarousable. It celebrates molding and bleaching as creative touches and it forges new forms from the fall of light and the grafting of two apples.

The Kiss or Poison Boyfriend or Jesus’ Blood is curated by Dan Howard-Birt at the invitation of Intercession Gallery whose remit is to explore print in its broadest sense.

The exhibition will be shown at;