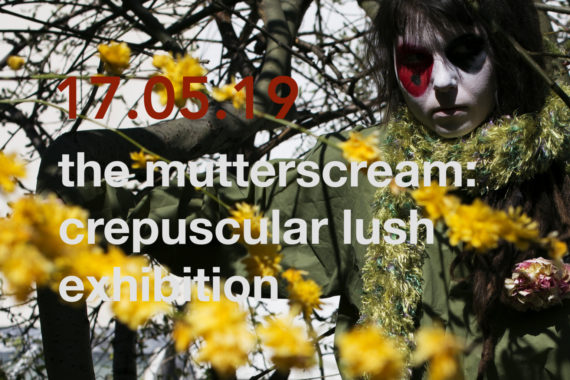 The Mutterscream began as an idea for a joint exhibition with multi-disciplinary artist Charly Morgan-Ivey and photographer Matt Kirby. Both had decided that they wanted a twist on the unattractive, traditional and clinical white space with the glass of wine and chit chat evening. After several coincidences, chance pub meetings and a loose idea of what the event and content would be and a strong sense of what it would not Matt Kirby took on the role of organizing and curating The Mutterscream and Other Indignations which took place in January 2019.This included several artists of various disciplines inspired by the performative, the ethereal, the savage and the clash and co-existence of the beautiful and the grotesque. On May 17th The Mutterscream will once again take place at the gallery space at Jacob’s Market with the Crepuscular Lush exhibition. The consensus has been that what The Mutterscream is managing to achieve, based on how well the last one was received and the promise of the next, is to be a well organized conjoining of various static art media, performance and live music. There has been no set theme but only an understanding of a tone that the audience will find immersive. If The Mutterscream has a definition then it is to communicate a silent but universal discomfort that we have all occasionally experienced even though you may not have previously defined it which can be likened to a butoh dancer contorting in reaction to the itch below their skin accompanied by the sounds of Obey Cobra. The Mutterscream: Crepuscular Lush will feature artists from London, Brighton, Madrid, Malaga, Bristol, Cyprus and South Wales including Ellie Walker, Camilla Mason, Tyr Leach Martin, Fran Gonzalez Camacho, Alex Colley, Petros Kourtellaris, Alice Bradley, Matt Kirby, Amy Perry, Zena Blackwell, Charly Morgan-Ivey and Marta Junquera. Music by Little Gee, Sean Addicott, Aperol Xav and Obey Cobra.