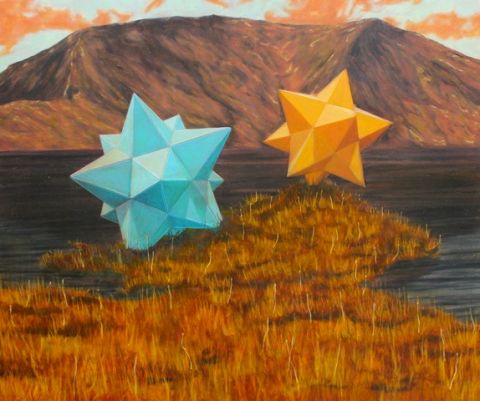 Lucy Boyle / Lindsey Bull / Isaac Willis / Luci Eyers / Stephen Harwood / Daisy Richardson / Benjamin Bridges…..The visionary tendencies and post-modern fantasies of contemporary painting are examined in The Owl Service, which takes its title from Alan Garner’s 1967 ‘low fantasy’ novel of the same name. Garner was one of the influences on the 2011 exhibition The Dark Monarch at Tate St Ives, which outlined a lineage of British art that takes its inspiration from a particular type of mysticism that has its roots in our collective Gothic imagination. Co-curator, Michael Bracewell, in his introduction to the exhibition explained how the 20th century was marked by new developments in technology and mass media, but that Monarch was interested in tracking ‘the shadow of that century’, signposting various relationships between modernism and the occult. Bracewell asserted that no matter how much technology accelerates, there will always be an aspect of art making ‘which will want to look at the mysterious, the enigmatic and that which cannot be explained.’