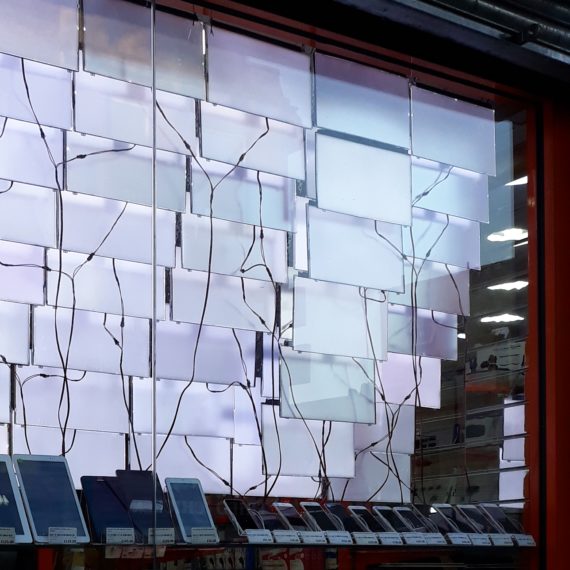 Though ubiquitous the screens of our electronic devices remain largely invisible – something we look through and into, but rarely at. Our attention is held by what they display and transmit rather than by the screen itself. These damaged screens, previously unnoticeable because of their smooth functioning, announce their presence when they cease to work, becoming suddenly visible.

Removed and repaired in shops like All About Laptops, in whose window we now find The Romance, they form a part of the physical detritus of our supposedly dematerialised digital lives; skins now shed to expose their insides.

Apparently all alike, the unique and personal qualities of each screen are brought to the fore by their adjacency. With information stripped away their haptic character is exposed: bent, broken, marked, scratched – their journeys through the world take their toll, and here they become material again.

Through the artist’s handling they become transmitters of only light. The synthetic glow of the screens reveals an array of subtleties in tone and quality. A pallet of colours emerges. Complexity emerges from the combination of simple elements.

Organic lines inscribed by cables tumble, swing and sag gesturally against the framework of screens: A grid of noisy digital apparatuses brought to silence and then allowed to speak on their own terms.

The titles of the works in Hanusch’s series are suggestive of the energy and potential which the artist finds in these rejected items: The Return, The Magic (both 2018) and now The Romance. While The Magic was shown in a gallery space, and The Return in the Spanish wilderness, The Romance is sited in a busy South London shopping street, amidst architecture, commerce, daily lives and the concentration of people, traffic and noise.

Each articulation of this series shares commonalities and marks differences with the others. Each iteration communicates with a different audience, putting something different out into the world and maybe (hopefully?) getting back a different response. Each version sets into play a different set of social and aesthetic relations. Each is a call looking for a response. Each is a question, posed with a sense of uncertainty and risk.

Modularity gives a certain internal propulsion – once a process gets going it can gather momentum and take on a self-perpetuating continuity. This gives the artist impetus to see where it leads and what might be found out by following it.

Working with material in this way affects a small intervention into the flow of things: an attempt to meet the material on its level and see how we might interact with it and respond to it. Something might be revealed in the objects, or the objects might reveal something in us. We meet in the middle when we remember that our bodies are material things, moving in a world of objects whose inner being we can never really understand or access.

In Hanusch’s work, ultimately, the material must lead the way. The process becomes about seeing what can be unlocked, allowing the material to speak, observing it, listening to it and at some point, letting it be.

The grid-like formality echoes the work of Agnes Martin, whose desire to remove the ego from the artwork is also instructive. By clearing away noise, Hanusch allows for an experience with the material – a visual nowhere that creates space for contemplation.

Kindly supported by All About Laptops.