Through No.3 - a-n The Artists Information Company 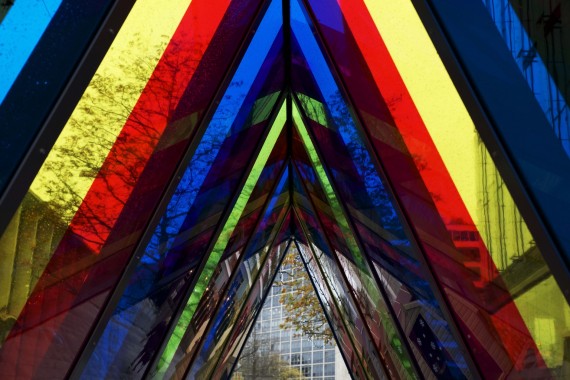 Liz West is excited to be working in partnership with Castlefield Gallery and Allied London on a brand new public art commission for Spinningfields, Manchester.

Through No. 3 is a six-metre long triangular prism corridor of light and colour installed on Crown Square in Spinningfields from the 25th November 2015 to Wednesday 6th January 2016. The artwork will be unveiled at 5:30pm on Wednesday 25th November 2015, when it officially opens for the public to enter the artwork and see its surroundings through a spectrum of colours.

West’s Through No.3 continues the artist’s exploration of colour and light as primary material for artwork. The walk-through structure will encourage visitors to literally look at their surroundings in a different light.

Liz West says “Making your way inside the multi-coloured corridor through either side of the structure, visitors will see the world around them transformed by saturate colour. The coloured barrier between the outside and inside will create a multi-coloured striped cloak and distortion in an array of different hues, transforming the usual colourations and appearance of the outside environment.”

Working across a variety of mediums, West creates vivid environments with the aim of provoking a heightened sensory awareness in the viewer. She is interested in exploring how sensory phenomena can evoke psychological and physical responses that tap into our own deeply entrenched relationships to colour. Her intuitive and often playful approach to making sculpture and art installations leads to visually rich works that viewers cannot fail but to be drawn into. Underpinning West’s practice is Josef Albers’ colour theories and his Bauhaus teachings, which she references alongside an informed understanding of Newtonian optics and Goethe’s theory of visual perception.