You're Surrounded by Me - a-n The Artists Information Company 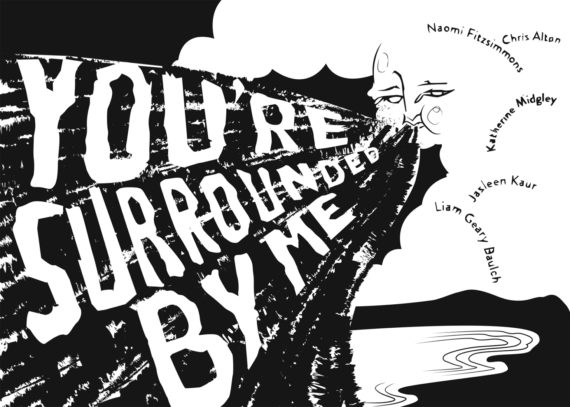 Clad in royal blue, the Sea Squad chant; pom poms wave and a call for climate justice is issued. Convened by the artist Liam Geary Baulch in 2016, Sea Squad: Cheerleaders Against Climate Change is a multilingual performance, in which Geary Baulch and crew take on the molecular structure and (hypothetical) voice of the sea.

Taking the Sea Squad‘s chant as a point of departure, You’re Surrounded by Me considers that which surrounds us, yet frequently goes unnoticed or unquestioned. Bringing together new and recent work by 5 artists, this exhibition seeks to direct our attention into the corners of our eyes, alerting us to that which has been consigned to the periphery; rising sea levels, the proliferation of stock imagery, skeuomorphic fallacies, the atomisation of communities and the privatisation of the commons.

In the popular musical drama, The Sound of Music, a chorus of nuns ponder the conundrum; “how do you catch a cloud and pin it down?” This exhibition is driven by a similar question; how do we develop a solid notion of a ubiquitous occurrence, which somehow eludes our attention or grasp?

The un-pinnable cloud – sung of by the Sisters – is somewhat paradoxical. Whilst it’s outward appearance is that of solidity and visible mass, a pin would pass straight through without record. The cloud’s apparent firmness is reflected in the word’s etymology; it is derived from the Old English clud or clod, meaning a hill or a mass of rock. Due to the visual similarities between a rocky mass and a cumulus cloud, the volumes of evaporated water in the sky came to share a name with a material of contrasting physicality, producing a degree of cognitive dissonance.

The artists featured in You’re Surrounded by Me seek to hone in on similar areas of incongruity and tension, instances where; appearances are deceptive, attention is misdirected and the information presented only serves to produce confusion. This exhibition seeks to shine a torch into the encroaching fog, before being surrounded becomes being engulfed.