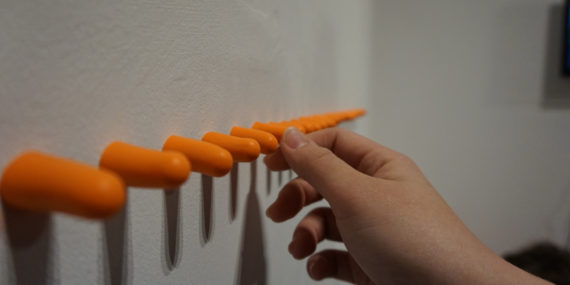 “I like making organic forms that people can interact with”

Degree shows are not known for being havens of tranquility, but Catherine Gittens, armed with a giant orange blob, is planning to build a small oasis of calm at hers.

Originally from Nottingham, Gittens centres her practice on ideas of wellbeing and nurture, presenting sculptural forms as a touchstone for meditative and playful exercises. She has used workshops and installation to explore the therapeutic properties of objects, encouraging people to put their busy lives on hold and concentrate simply on having fun.

As her BA in Fine Art at Sheffield Hallam draws to a close, Gittens has been weaving together these ideas to create a relaxing environment for visitors to connect with her work through experimentation and play.

What is the main focus of your practice?

My work is about about social relational engagement and how you can use materials or sculptures as a tool to connect with others. For a lot of our lives we’re too busy to reflect, we don’t have the space to stop and just acknowledge ourselves and our place in the world. So I like making organic forms that people can interact with – these sort of comforting blob forms which often have very human characteristics. 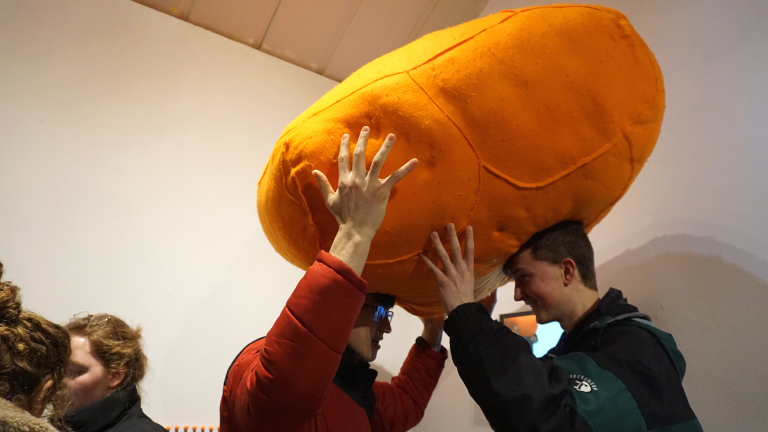 What materials do you use? Are there any recurring elements or motifs in the work?
The colour orange! It’s a joyful colour and people are attracted to it. The shade I use is quite bright and artificial. But for the degree show, I’m looking at how I can balance that against other colours and other forms. Colour is important, but how people engage with the sculpture is the main thing. As for materials, I started off with soft fabrics, a lot of felt and wool from the market, but now I like to use things I just come across in the everyday. It might be what’s in the skip, or something my friends don’t need. I’m interested in using these in a more conceptual way, in letting the materials speak and then evolve into something else. But the work only comes alive if people interact with it. I’ve described it as ‘living sculpture’.

What sort of environment do you look for to stage your work?

It needs to feel comfortable so that people can be themselves and engage with the work how they want to, rather than how they think they should. I’ve only used quite institutional spaces so far, but I think it would really change if it was in the public, the city centre, or maybe the Peak District. Recently I did a workshop with the orange blob as part of a 24-hour art event. My slot was around 11pm, so people were relaxed but also quite giddy. We all picked up the blob together and moved it round, and then stood on it and bounced on it, and played with it. At one point we were all kicking it in the air and moving it round on our feet. It released a sense of joy, people genuinely found it therapeutic. But I think it helped having a comfortable carpeted environment, because people could just roll around on the floor. They weren’t worried about it. 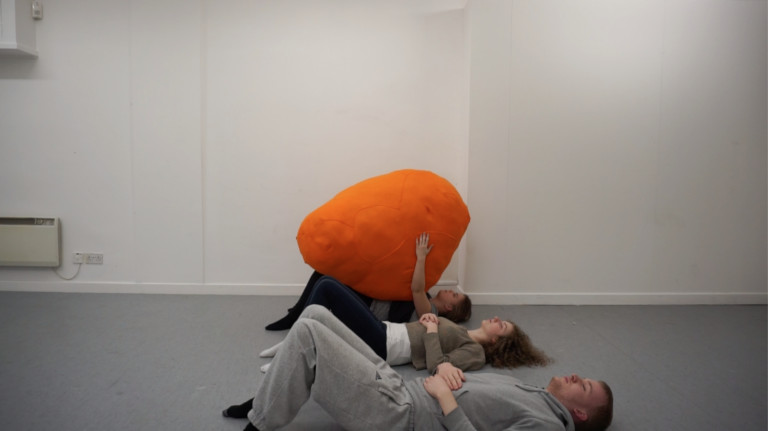 Which artists or ideas have inspired your work?

Lygia Clark is an artist who’s really influenced me. She looked at how using materials in relation to the body can be a therapeutic and healing experience, and a way for people to grow to understand themselves. She used lots of everyday materials, elastic bands and big plastic sheets and things like that. It’s a different way of engaging with people, rather than just through conversation. Faith is also a crucial influence on my work. There’s a relaxed environment at church, you can come as you are, share where you’re at and receive support. It’s all about creating a space where anyone is welcome. That sense of community is close to my heart, and I think having a chance to express it creatively is really great.

How will this be reflected at the degree show? How important is it to recreate that welcoming environment for visitors?
I think it’s really important. It’s about you being able to bring your own way of playing and reflecting. You can have slow reflection in a contemplative space, but there is also a busy, physical and joyful element to the work. There can be as much stillness as joy. I’m still figuring out what I want the degree show to look like, but it will be along the same lines of sculptural interaction. I think it would be nice to have lots of little engagements spread around the show: a sort of journey where people can physically interact with sculptures and forms, and contemplate different materials as they walk around.

Do people usually respond to your work in the way you expect?
Yes and no. I had an exhibition in January where I put the orange blob in the corner, and a little row of orange earplugs on the wall, and then a film of me and two other course mates interacting with the blob and playing with it. I found that having the film was really effective because people felt really free to just engage with the sculpture. In the film we didn’t talk much, we just communicated physically. We had loads of relations going on, one time it felt like we were angry with each other and sometimes we were loving it. We were just focused on this orange blob, and it was therapeutic. I guess that feeling oozed out of the film, because people found it a joyful thing to watch, and oddly relaxing. But I think when the sculpture is just sitting in a gallery space it’s quite difficult, because people often don’t want to touch art. I had to be like, ‘You can touch it, you can pick it up, you can play with it!’ They were like, ‘What, can I? Am I going to do something wrong?’

Degree show: A decision has yet to be made on whether a physical show will take place. www.shu.ac.uk/

Interview by Orla Foster, one of eight a-n members on the a-n Writer Development Programme 2019-20 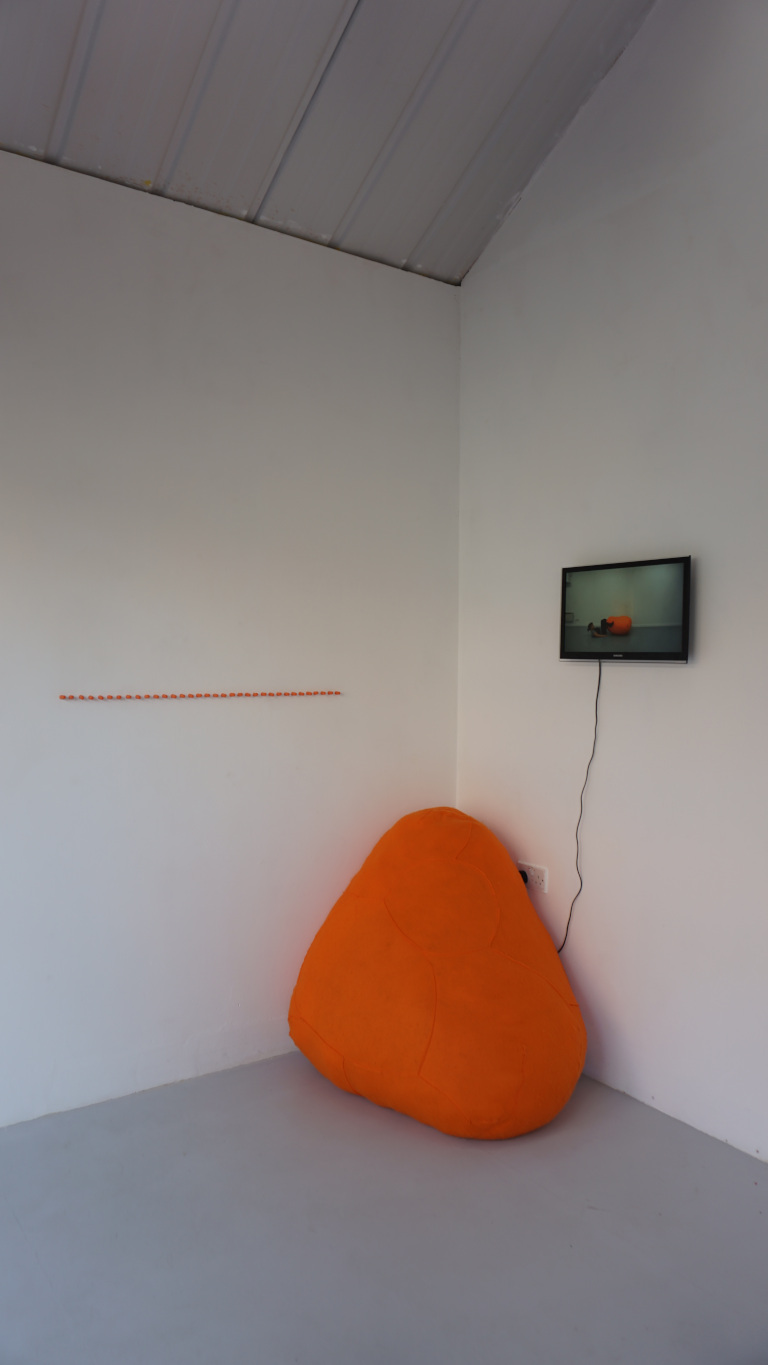