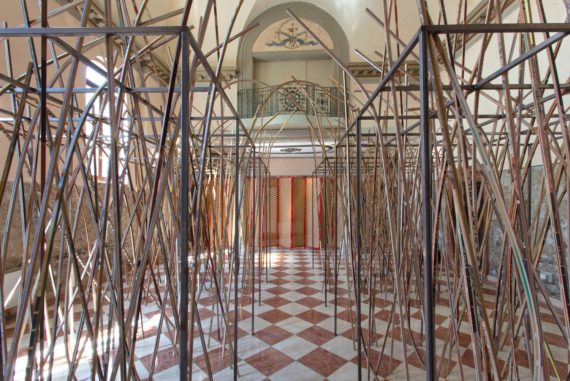 Tate Britain has announced the 10 artists who will each receive one-off £10,000 bursaries in place of this year’s Turner Prize.

Other artists to receive the bursary are London-based Jerwood/FVU Award winner Imran Perretta, who examines marginality and cultural histories through film, performance, sound and poetry.

Shawanda Corbett is an Oxford-based artist whose expansive practice combines ceramics, paintings and performance to question the idea of the ‘complete’ body, whilst Glasgow-based artist and singer Jamie Crewe uses video, sculpture, drawing and text to probe ideas of identity, power, desire, community and history.

Arika is a political arts organisation based in Edinburgh who since 2001 have organised projects supporting connections between art and social change. Meanwhile, London-based artist Sidsel Meineche Hansen investigates the ways in which virtual, robotic and human bodies are manufactured and manipulated in today’s technology-driven, capitalist society.

The final two artists are Ima-Abasi Okon, a London and Amsterdam-based artist who works with sculpture, video, sound and installation, plus Alberta Whittle, who lives and works between Barbados, Scotland and South Africa. Rooted in the experiences of the diaspora, Whittle’s work incorporates performance, video, photography, collage and sculpture to tackle anti-blackness and the trauma, memory and ecological concerns which come in the aftermath of slavery and colonialism.

In response to the coronavirus pandemic, last month Tate Britain announced that it would not be possible to stage a physical Turner Prize exhibition this year and instead it would ask the jury to select 10 artists to receive bursaries.

After 12 months visiting hundreds of exhibitions in preparation for selecting the nominees, the jury chose the artists for their ‘significant contributions to new developments in British contemporary art’. Additionally, the artists will still be eligible for the Turner Prize in the future.

Alex Farquharson, Director of Tate Britain said: “Following a lively and rigorous virtual debate, the jury has settled on a list of ten fantastic artists who reflect the exceptional talent found in contemporary British art. From ceramics to film, performance to photography, they represent the many exciting and interdisciplinary ways that artists work today.

“These bursaries represent a vote of confidence in that work and offer some much-deserved support in challenging times. We’re extremely grateful to John Booth, Catherine Petitgas and The Ampersand Foundation who generously stepped forward at such short notice to make these bursaries possible.”

The Turner Prize will return to its exhibition format in 2021.