2021 – How was it for you? #4: Karl Bielik, painter, musician and Founder-Director of Terrace Gallery, London - a-n The Artists Information Company 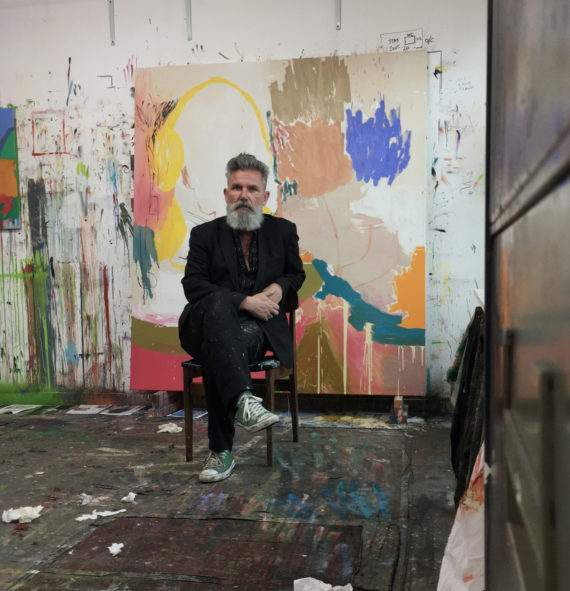 London based artist Karl Bielik‘s paintings have been in numerous high profile exhibitions, including John Moores Painting Prize, RA Summer Show, and The Marmite Prize. He is a member of Contemporary British Painting and is the Founder and Director of Terrace Gallery, which following a seven month lockdown due to the pandemic managed to pack in seven exhibitions in the second half of this year. He is also currently exhibiting in ‘A Generous Space’, a real-world immersion into the Artist Support Pledge community taking place at Hastings Contemporary.

As part of our 2021 – How was it for you? series, Bielik talks birdsong, Sylvia Plath and the light ‘starting to flicker’ as galleries reopened with a-n Writer Development member Jamie Limmond.

What kind of a year has 2021 been for you?
It’s been a year of extremes – a year which played tricks on all our minds. Misinformation and fear can do that to a person. I had access to my studio all year, so the restrictions weren’t a hindrance on paper. But following on from the chaos of 2020 life just never felt settled and things jarred most of the year, whether practical stuff or the weight of dealing with more personal issues that I don’t want to expand on. The lack of humour, of chance, of the random happening were all huge things to deal with.

That said the peace and quiet, birdsong on busy London streets and homeschooling a six-year-old were all good things. My painting practice has slid and dragged along slowly with more agitation and doubt than usual but it has continued, which is the main thing.

What (if anything) has changed for the better?
I’m not sure if anything has.

What do you wish had happened this year but didn’t?
To have been governed by decent human beings.

What would you characterize as your major achievement this year and why?
There isn’t really a specific one but the reopening of my gallery, Terrace, with a group show – ‘Studio Confetti’ – that I curated was a high point. Amazing turn out, paintings, people and a real feeling that there was some light starting to flicker.

It’s a celebratory title, but it also has a tinge of melancholy. It’s like a metaphor for painting, marking time and events with bits of colour thrown around…How did the title come about?
The name for the show came by accident. I was fumbling around in poetry books looking for something that might work for an eclectic group show with 37 painters, and there was a line in the Sylvia Plath poem ‘Years’: ‘Stars stuck all over, bright stupid confetti…’ I scribbled it down quickly in caps and when I came back to it a few days later I read it as ‘bright studio confetti’. ‘Studio Confetti’ fitted, it felt hopeful, playful, poetic and open but also tinged with the sense of a lament for all the paintings that don’t work and are discarded.

Things changed quite drastically on the very long install day, as two of the gallery walls and part of the ceiling had badly leaked the night before. I had to cordon off part of the space and arrange all the works in a tight salon hang on one wall, but it hung together really well. So essentially two accidents had a major part in the show.

The Plath poem is also about stasis and motion– does it feel like things have started moving again?
The private view started with people being quite wary of each other (we were on the back of months of lockdown) but after the paranoia faded there was a transformative feeling around the whole evening. It felt like there was reason for hope. Terrace has remained open since and we recently had ‘Julie’s Bob’ featuring 17 painters curated by Julia Warr which opened on 11 November and ran until earlier this month. There’s a new private view programmed every four weeks until July 2022, with shows curated by Johanna Melvin, Matthew Macaulay and Neil Zakiewicz, to name a few.

Do you think the transformative feeling of the Terrace re-opening will have an effect on your own work?
That I will have to wait and see, but the thing I get from running Terrace is interaction with other artists. Hanging the work I really like, and spending that much time with some else’s work is rare unless you own it. It does consume some time but it gives more than it takes.

You’ve been taking part in the Artist Support Pledge – has that affected how you interact with your audience?
The Artist Support Pledge actually created an audience – I didn’t really have one prior to it. I would sell the odd piece and exhibit in decent shows but I don’t have a gallery or dealer, so ASP has been incredible. It’s empowered artists to say that their work is for sale and let people know they can afford it.

Is there anything you’d like to have done this year but haven’t?
I would’ve written, mixed and released a new Lark album but didn’t, due to my own lack of discipline and access to musicians. I founded Lark in 2005– sometimes it’s a band, sometimes a solo project. I write the music and lyrics and sometimes the songs stay in that lo-fi form and other times I ask much more capable musicians to play parts and the songs take on a fuller, more loosely traditional form. The songs I’ve been told are ‘romantic, dissonant, feverish with a blend of heavy bass lines, raucous sounds and turbulent lyricism’. We were signed to Care in the Community Records for two albums and six singles and since then released four more albums on Standard Lamp Records. We’ve had remixes done by Errol Alkan, The Band of Holy Joy, Keeley Forsyth, Green Gartside and Andrew Weatherall.

Do you see your painting and music as separate entities?
I used to see the music and painting as one, and I guess there are many similarities in the way I paint and make music– the gradual building up of a picture with no set destination and the use of chance in both practices are obvious connections. But I don’t see the painting and music as intertwined anymore. Mainly because Lark release an album every two to three years and painting is a daily practice.

What are you looking forward to in 2022?
My work will be in a show curated by Ludovic Dervillez at Grange Gallery in Cernay-Les-Reims, and in ‘Patternicity’, a show around the use of pattern in painting co-curated by Christina Niederberger and John Walter at ASC Gallery, London. ‘A Generous Space’, the Artist Support Pledge show curated by Matthew Burrows, opened at Hastings Contemporary on 25 November and that will continue until 22 April 2022. So a few shows lined up, but just to keep on keeping on.