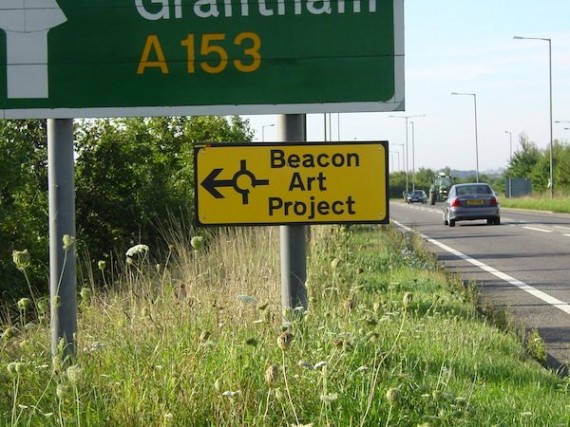 Cities outside London have grown from small beginnings to become active art centres; most have been built around artist-led activity. In Lincoln, an artist-led scene is building in strength and, for two connected reasons, there is potential for something particularly interesting. Firstly, because it is starting from almost a blank slate. Secondly, there is a sense of things being done slightly differently, with artists responding to the peripheral nature of Lincoln in a positive way.

When Nicola Streeten and John Plowman moved from London to Lincolnshire in 2004, they established Beacon Art Project. Their driving ethos was to “think about where we were, rather than where we were not. We felt that it didn’t matter that we weren’t in a ‘centre’ – we were the centre.”

Beacon’s approach is to commission artists to respond to unusual, rural sites, introducing new audiences to their art. An example of this ethos is an early performance by Doug Fishbone in a village hall, where both artist and audience were placed in an unfamiliar environment. This approach has since been expanded into different contexts, from commissioning Kelly Large to undertake a residency with a school in Sleaford, to large scale group exhibitions in National Trust properties, to the more intimate Beacon Bi-Monthly events.

Responding to the city

The model of temporarily taking over and responding to sites particular to Lincoln could be relevant to nearly all the current artist-run activity. From pop-up fine art student exhibitions (this year, the Ballard Arts Festival) to ventures such as Lincoln Arts Network, Approaching Affective Zero and The Collective, this sensibility permeates the city’s arts activity. There was even a free Alternative Art College, run from student houses before it relocated to London.

Amelia Beavis-Harrison and Alan Armstrong initially left the city for Nottingham when they graduated, only to found Lincoln Art Programme in 2009 as a way to generate activity and act as a catalyst for arts in the area. Explaining their focus on commissioning live works and performance in direct response to sites in the city, Beavis-Harrison says: “It’s a way to activate public spaces in the city, rather than relying on people entering gallery spaces. Having an uncharted city meant that we were able to provide entirely new and unique opportunities to the artists we commissioned, so that the commissions we developed retained a fresh relevance to the city and within the arts.”

The Monks Gallery takes an opportunist approach to setting up a space, literally treating a functioning house as a readymade gallery. Each exhibition has featured a mix of local emerging artists, such as Joana Cifre Cerda, Rob Britt and Stu Burke, with more established names from outside the city such as Tessa Farmer, Alex Pearl, littlewhitehead and Kevin Hunt. A particular highlight has been watching Doug Fishbone’s Elmina in the bathroom. This approach runs through into other activity in the city, such as Reel, a nomadic screening of artists’ films. The most recent one was hosted by Monks Gallery and included David Blandy, Keren Cytter, David Shrigley and Lincoln-based artists such as Kate Buckley and Thomas Went.

DIY and free of funding

Over+out has a similar DIY attitude, forming after a chance conversation with a handyman who came to fix Dale Fearnley and Laura Mahony’s leaky shower. He happened to have a free (ex-S&M dungeon) space above a garage. “He was a bit of a Jack the Lad, a Del Boy character, and didn’t seem to mind what we did with the space,” says Fearnley. “We got a set of keys copied and we were in. A week later, we opened as a fringe exhibition to the city’s first digital arts and culture festival, Frequency.”

There has since been a series of wildly different exhibitions, the sort only possible in spaces free of funding and other restrictions. “We played it to our advantage,” says Fearnley, “we didn’t have anyone to answer to, no responsibility other than to put on good shows and support the growing contemporary art culture in the city.” Recently, the space has closed due to a change in ownership. The plan is to spring up somewhere else soon, something possible in Lincoln with comparative ease.

The continued growth of the arts scene in Lincoln looks bright. Beacon has recently extended its lease on Greyfriars, a 13th Century Friary. The first floor constitutes unique studio spaces, while the ground floor will feature a gallery that will build on Mistaken Presence, a series of exhibitions curated by Armstrong and Plowman. Lincoln Art Programme has an upcoming Whit bank holiday weekend event, Red Herrings and Chinese Whispers, that includes artists, such as Tim Etchells and Kurt Johannessen, responding to the city’s Brayford Pool area. Monks Gallery meanwhile are taking on artists from other cities in their Versus venture.

There are new artist-led initiatives forming too. General Practice, a new co-operative of artists, is planning to open a gallery space soon. “The group covers a diverse range of artistic disciplines, such as film, sound installation, printmaking and sculpture,” explains Nick Simpson, who also co-runs The Monks Gallery. “Our approach is to consider the potential growth between and beyond these forms, to encourage collaboration and new forms of artistic practice.”

John Plowman perhaps best sums up the situation for artist-run activity in Lincoln best. “Our challenge was, and remains, to consider how we could share our excitement and enthusiasm for the art and artists we like. Our aim has always been to be outward facing, to be a centre – a centre of excellence.”