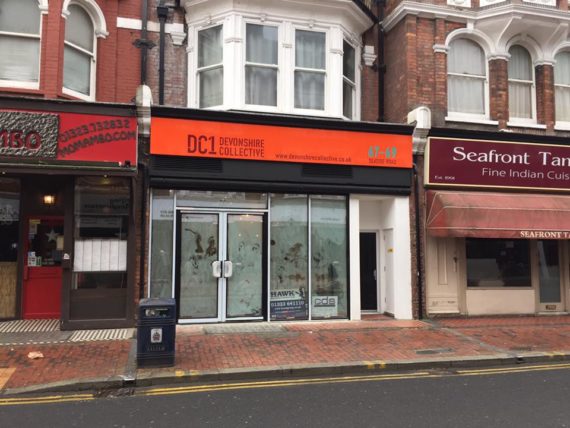 “Artists make the best curators because they approach it like making an installation,” says Rachel Cohen, one of several artists in the ‘Collective’ exhibition at DC1 Gallery.

Cohen’s series of small paintings, Six Mirrors, occupies one wall of this modest basement gallery, part of the newly opened Devonshire Collective in Eastbourne. The show is curated by Judith Alder, the Eastbourne-based artist who also runs the Blue Monkey Artist Network.

‘Collective’ brings together exquisite works, sometimes in series, by 11 artists. Alexander Valy’s work, I am Cute, combines manufactured ‘nodding dog’-style toys with animal skulls. Three toys have been decapitated, their heads replaced with the delicate and complex skulls of a dog, a rabbit and a squirrel.

Susannah Douglas presents a series of beautiful and tiny drawings based on old photographs, all evocative of childhood memory and experience.

Alder herself has created a two-element work, Breathe Gently, Let all Remain Unchanged, consisting of a craft-intensive drawing of pencil shavings and a display of vintage and modern pencil sharpeners donated by members of the public. 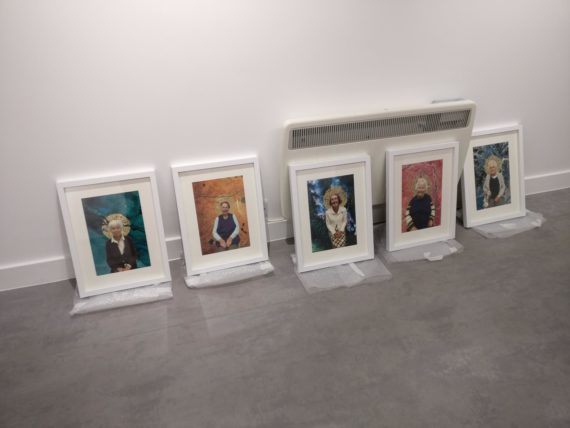 “I had just finished ‘The New Immortals‘ at Phoenix in Brighton and I was asked to curate this launch exhibition,” she says. “I was given the title ‘Collective’ and so that was my starting point. I wanted to look at the different meanings of the word, of artists working with collections but also artists collaborating and being a collective.

“The theme of collections as being a repository for memories emerged, along with a domestic sub-narrative, which seems appropriate because the street the gallery is on has flats above the shops.”

Devonshire Collective has developed out of years of local authority funding cuts and the encouragement of greater partnership working. A council-led regeneration initiative, it is testing a business model that is providing initial start-up funding, gradually tapering off over a three-year period, after which it is expected to be self sustaining.

The project has been developed by ‘creative and cultural innovators’ B&R Productions. Co-director Christine Harmar-Brown explains: “The council were very keen to look at how empty properties in Seaside Road could be repurposed and feed into their regeneration plans for the Devonshire ward. They also want to provide something of a visitor attraction.

“We proposed three spaces: the DC1 Cafe and Gallery; DC2, which contains maker spaces with a print room and pottery studio; and DC3, a workshop space for hire by artists for their own practice on temporary hourly lets.”

All three spaces are now open for business, in what has been a speedy turnaround – a mere 12 months from initial proposal to refurb to opening.

The initiative has been spun out into an independent CIC (community interest company), with the slightly complicated mandate of providing professional development and resources for artists, as well as reaching out to the range of Eastbourne communities by delivering socially-engaged projects.

To this end, the nearby Leaf Hall Community Arts Centre and The Royal Hippodrome Theatre are associates to the project. Managing the spaces and developing the programme is Brighton-based artist and producer Amy Zamarripa Solis. “The aims are really about promoting cultural activity in the area and supporting artists’ overall practice across the spectrum,” she says.

“The launch programme is about getting people into our spaces so that they can see how it will work for their own practice and productions. Membership costs £60 a year and that provides discounts on hires and access to a range of support from fundraising to marketing.”

The ‘Collective’ exhibition is intended to announce the ethos of the project to the range of Eastbourne artists. Says Alder: “I did go to some trouble to make sure that the artists were not all local artists.

“It’s not just about giving Eastbourne artists the opportunity to show, but also to bring other artists in, to extend networks and to see other work. I am really keen to support it because it offers all sorts of things to artists that they haven’t had before in Eastbourne.”

A case of ‘watch this space’, then – but in the meantime, this first exhibition is a joy to visit.

CORRECTION: The title of Rachel Cohen’s series of paintings has been corrected to Six Mirrors – one more than was originally stated