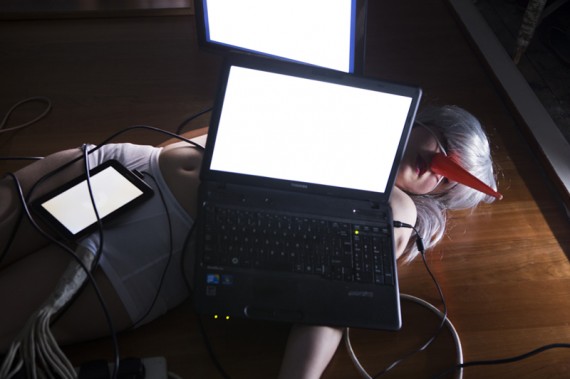 Thanks to a bursary from Creative Scotland, Edinburgh-based artist Catherine Street spent 12 months researching new ideas through a series of projects and residencies. Taking place at Project !!WAKAKA!, Edinburgh, the Scottish Sculpture Workshop in Aberdeenshire, and Hospitalfield Arts in Abroath, the work developed during this period is now showing in a solo exhibition, Muscle Theory, at Glasgow School of Art’s Reid Gallery.

Street’s practice uses text, audio, film and performance to explore the limits of her body as a material. Often in a domestic setting, her work explores the body’s relationship to matter, thought, emotion and sensation, and questions how the body also mediates space outside of itself. Muscle Theory is the first time Street has shown a full body of work in the context of an institution.

You’ve developed the work during residencies and the Reid Gallery has given you the opportunity to show this research as a body of work. How important has this been for you as a process?
Developing work for the Reid Gallery has been an ideal process. The Creative Scotland bursary allowed me to do the residencies and to see how a body of work can develop. This show is an opportunity to put all of that work together, to have an overview of it. Although I have made works that stand alone I feel this way of working is exciting, it has established relationships between different formats.

Did you know what you were going to do with the time and the financial support to this extent?
No, but I did have ideas about what I wanted to develop. I wanted do things that just concentrated on the audio alone, like spoken word that is split apart from an image. I also wanted to be more ambitious with performance. Before the bursary I was getting to the point where things couldn’t really go any further without having dedicated time to do things.

What works are you showing in Muscle Theory, and how has the exhibition pushed you to think differently?
There will be a three-screen video installation with imagery and minimal sound alongside another sound work of spoken word in the same space. There will be another performance-to-camera film too, with me doing simple but very visual action. It is a culmination of works that have no linguistic or language-based aspects next to other works that do. This exhibition has enabled me to explore these different registers of meaning, which is how I like to work. They are antagonistic to each other but they feed off each other too.

You’re presenting a performance work, Breathing then speaking. How does this fit in to the exhibition?
I’m doing six one-hour slots during the run of the show. It is important the performance does not provide all the missing answers to the exhibition, so I am allowing for some things to fluctuate with components that play out at different times. The longer spoken word piece will be switched off when I am there, so the performance will happen in place of the audio.

How did you go about making the audio work?
I made the spoken word piece during a residency at Hospitalfield Arts last autumn. I was in one of the rooms relaxing on a sofa just speaking, ostensibly in an improvised way, about ideas I had been researching. I then repeated this, going over the same topics again and again, as if speaking off the cuff; the exercise became about how the ideas were ingrained or solidified through repetition.

How has working with an institution like Glasgow School of Art made you approach things differently?
My previous installations have been site-specific and in domestic spaces, including my own house. Working with an institution, and in a white-cube space, is a different context entirely. It has influenced the work but it also has a personal aspect attached to it, of me speculating what I am doing as an artist and why I want to be an artist. It has made me think about why it feels so different to make work for a space that’s dedicated primarily to the display of art.

Your work addresses the body and your experience of your own self. What relationship does it have with the digital and the Internet, where people often have another ‘self’?
With the digital, on one hand there is this promise of an immaterial existence, but there’s also a real physical aspect to this. Everything on the Internet does have a physical location, it is easy to forget about the actual materiality of these enormous data centres. My work strikes a contrast between this promise and how it is still rooted in a physical and finite state, much like the body itself. I have been thinking a lot about this whilst making these works: what other way of working is there other than everything coming from yourself? The idea of being on the outside of this, to me, seems impossible – because everything is mediated by your own consciousness. What I am trying to get at is, how do you get out of yourself? I am trying to get to the end of my own material, to exhaust myself as a material.