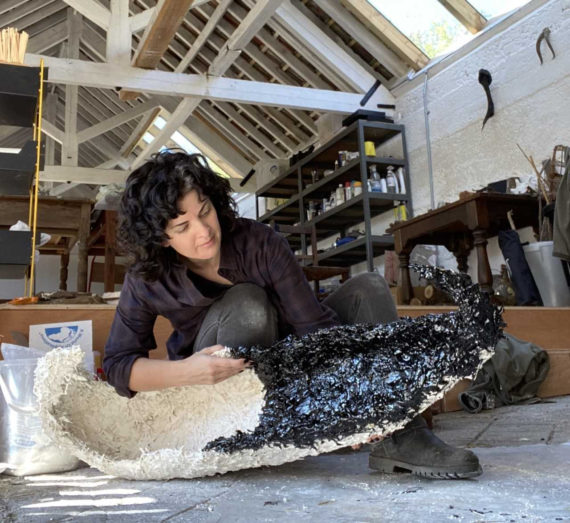 West Dorset based artist Chantal Powell creates sculptural works about the unseen aspects of our psyche. A PhD in social psychology, she has an interest in Jungian theory which informs her practice.

Elected as a member of the Royal Society of Sculptors in 2013, she was shortlisted for the Mark Tanner Sculpture Award in 2015. Powell has exhibited at venues including the Guildhall Art Gallery in London, Arusha in Edinburgh, OCCCA (California), and at collateral events at the 53rd and 54th Venice Biennales.

Founder of the contemporary arts programme Hogchester Arts, she curates their biannual summer exhibition. Here she discusses how lockdown has impacted her practice, the benefits of selling and buying work via Artist Support Pledge, plus her involvement with Isolation Art School, an online project featuring lessons and tips by artists to help people get creative while housebound during the Covid 19 crisis.

You recently became involved in Isolation Art School. How did this come about?
Isolation Art School was on my radar as an interesting initiative so I was really pleased when artist Dale Adcock got in touch and invited me to be part of it. Dale is working with Keith Tyson on the project, getting in touch with artists to generate creative lessons and projects that are offered for free to help get people creative at home during Covid19 crisis.

They have nearly 40,000 followers to date and a wide range of contributions for both adults and children ranging from studio tips, sharing of different artist techniques, art history lessons, and creative project ideas to try out. Contributors include Quentin Blake, Jonathan Yeo and Matt Collishaw alongside creatives from many different practices and career stages. It’s a really great way to get a glimpse into other peoples practices and workspaces.

Dale knew of my work and suggested I offer something in the art, alchemy, psychology space, which is the basis of my practice.

I went away and had a think about what might be of interest and decided on the idea of a ‘Lessons from Alchemy‘ talk. I focused on the alchemical symbol of The Sealed Vessel, which is also referred to as the The Closed House in alchemical manuscripts, which seemed perfect for our current lock down situation. In the lesson I give examples of the symbolic, poetic language of alchemy and draw parallels between the role of the sealed vessel in alchemical practice and the impact of isolation on us psychologically and artistically. 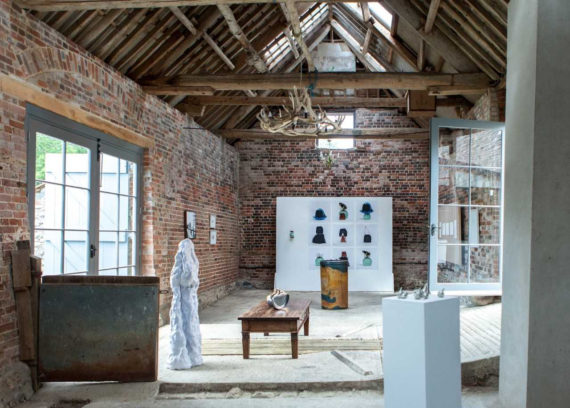 How has the current situation impacted your practice?
In terms of my work, I’m quite lucky because my studio is on the Hogchester Arts site so I’ve still been able to get in and work on the same projects that I was doing anyway. I know a lot of artists who have had to scale down and change their materials because they have lost their space, but I’m just carrying on.

The thing that has changed practically is time, because I have two children who are home schooling now, so the days are structured differently. Normally I would drop them off at the bus stop and I would have the day free to work in the studio, whereas now we have mornings where I’m around if they need help. They are older so it’s fairly easy, but I still need to be on hand.

In the afternoons we are trying to do stuff together as a family, so it just means a lot less time than there was before.

Obviously exhibitions have changed. I was exhibiting when we went into lockdown, so the show was shut down half way through. There are other things this year that I won’t be able to do, such as a project that I’m doing with an artist called Dean Melbourne called ‘Night Shaking’, which was part of my a-n Artist Bursary. We were supposed to be meeting people and organising physical spaces for the work to be shown, which we haven’t been able to do. So it’s basically been studio practice and research that I’ve been focused on, and letting go of the plans to get the work out there for the time being.

Have you looked at online engagement?
Myself and Dean have talked about getting ‘Night Shaking’ up as an online platform to generate discussion around the topics that we are covering. This would be a prelude to showing the work in the flesh at a later date. Maybe there is some conversational build up around it and drawing in people who are relevant in those fields with alchemy and mythology that we have been discussing.

I’m probably a little bit overly optimistic and am hoping to be able to exhibit by August, but we’ll see how things progress. We have just booked something in for March next year, so I’m really hoping by then it will be feasible.

In terms of the Hodgchester Arts residency programme, we are hoping that it will go ahead pretty much as planned, primarily due to the nature of the scheme being quite remote. It means participants will still be able to social distance even when they are here. 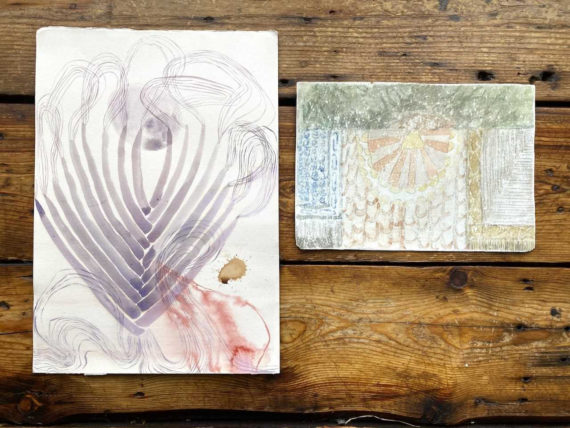 You have sold and bought work through the Artist Support Pledge. What has that involved?
I’ve bought a couple of pieces of work through it, so I’m really chuffed to have been able to buy from some artists who otherwise might have been unaffordable buying via a gallery. I picked up a piece by Aimee Parrott whose work I’ve really admired for a long time, and a small work by Martyn Cross as well.

The biggest thing for me with the Artist Support Pledge has been connections with other artists that I was previously unaware of. It’s generated this real community vibe, more so than was already there. Instagram has always been a good platform for artists because of the way you can visually share, but with the pledge project artists started talking about other artists, sharing people they admire or have bought from. It has opened up this whole extra view. I think my peer group in there was previously fairly static and now I’ve ended up main connections with a lot of artists who I didn’t already know via that.

At the start it was really encouraging for artists because there was a sense of panic where we were wondering where we could possibly sell our work. Even if it’s small things it’s been quite nice to feel there is some income you can receive via it.

Obviosuly, it lends itself to certain types of work, in that it’s perhaps harder to sell sculpture than 2D work. The larger more fragile sculptures that I do would not be appropriate. But if you work in 2D and make smaller works I think it’s a really great way to get people to know your wider practice.

Also, even though there are a lot of artists buying off artists, it isn’t only that. I’ve seen collectors buying off new artists via it because it’s in that affordable bracket. They can have a look and test of people they haven’t bought from before. That’s nice as well.

What else do you think could be done to help visual artists at the moment?
We are seeing more connection points than ever before such as online teaching and talks being made available, which is fantastic. I’ve been taking part in sessions run by the Carl Jung club in London, which normally I would have to travel to get to which I can’t do very often. Strangely, there’s more accessibility now than before. 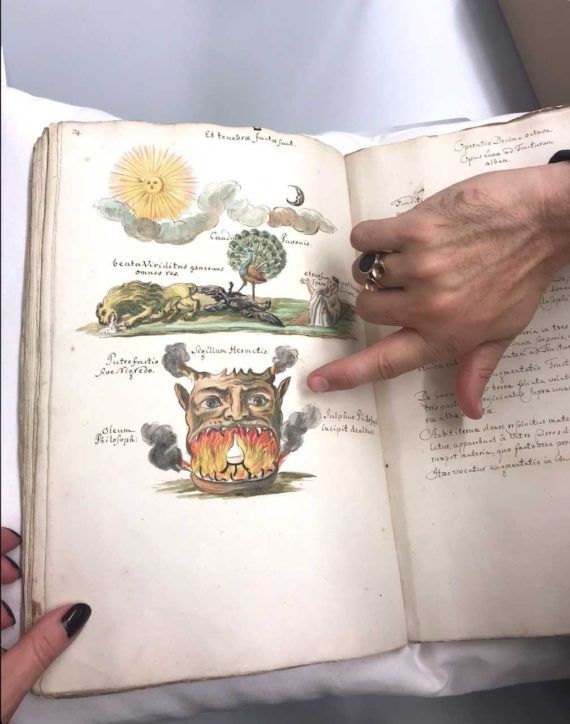 Last year you were a recipient of an a-n Artist Bursary. What impact has this had on your practice?
The impact has been really great. I applied for it with Dean Melbourne, who I previously mentioned, who is my collaborator on the project. So we did a joint application, and although we had been working around similar themes for a while it had never really been formalised, even though we kept saying ‘we’ll have to do something together’.

We are both interested in Jungian Depth Psychology and alchemy and mythology and the application was for a research phase that would solidify this.

One of the main focuses was to work with a Jungian depth psychologist in Somerset called Catherine Bygott who specialises in inner alchemy. That was fantastic. We met with her and did creative workshops and discussions which impacted our conceptual grounding in the subject and the kind of work we were making off the back of it.

We also used the bursary to fund trips to London, including visiting the Wellcome Collection where they have fantastic alchemical manuscripts in their rare books archives. We did a number of trips there looking at these manuscripts, which are stunning and really inspired my work.

Through building this relationship we did a talk on alchemy and art in the Wellcome Collection, and whilst in London visited the British Museum and the CG Jung Club to listen to lectures and meet up with other artists with overlapping interests in the field.

All together, we had nine months of research. It gave the project life and helped frame what my work is about now. We are now looking to take the project out into the wider world and have started to talk to various venues about them having different iterations of ‘Night Shaking’, whether it be specific collections or galleries and museums, or working with other artists and academics.

We are currently booked in to do a show with the Ingram Collection next March 2021. They have an amazing collection of British Modern Art, and we will be curating works from the collection that are quite archetypal in terms of the project, such as the night sea journey and the connection with the unconscious. There will be works by Graham Sutherland, Elizabeth Frink and Lynn Chadwick that have amazing symbology that we want to use. We will curate those alongside the work that we have been making through the bursary. I am really excited about the future possibilities.