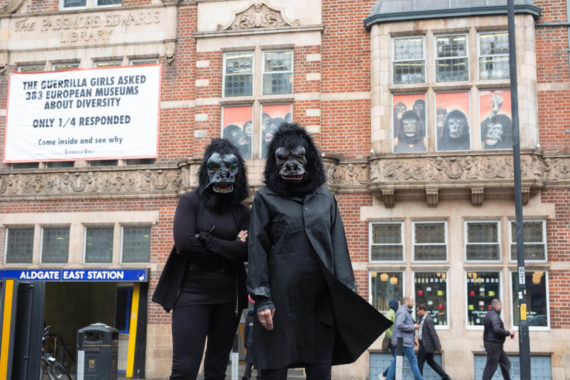 Formed in 1984, New York-based art collective the Guerrilla Girls are an anonymous group of female artists whose mission is to fight sexism and racism within the art world.

The group was formed by seven women artists in response to the exhibition ‘An International Survey of Recent Painting and Sculpture’ at New York’s Museum of Modern Art. Of the 169 artists chosen for the survey, which claimed to present the most important contemporary artists in the world, only 13 were female.

Retaining their anonymity by wearing gorilla masks for all public appearances, and using the names of dead female artists as nom de plumes, the Guerrilla Girls organise protests and present original research on posters, stickers, billboards and artwork.

Their most recognisable work is the 1989 poster, Do women have to be naked to get into the Met. Museum? Featuring an image of an Ingres nude with a gorilla head placed over the original face, it states that less than five per cent of artists in the Met’s modern art section are women, while 85 per cent are female nudes.

In the UK for their Whitechapel Gallery exhibition, ‘Guerrilla Girls: Is it even worse in Europe?’, Käthe Kollwitz and Frida Kahlo are two original members of the group and, wearing their gorilla masks, act as the group’s spokeswomen.

It’s fantastic that you’re naming and shaming individual institutions for your latest project, ‘Guerrilla Girls: Is it even worse in Europe?’ Tell us what you found out.
Käthe Kollwitz: Basically, we sent a questionnaire to all these institutions and they filled it out and we got all kinds of crazy answers. And as we looked at the answers we thought the best thing to do for the exhibition at the Whitechapel is to do a whole wall of their answers, and add comments on their answers. We found that only two of the 101 who responded – and we sent out 400 questionaires, so most didn’t respond –  had 40 per cent or more women in their collection. Most had a lot less than 40 per cent. And then one institution, in Scotland, talked about how great they were…
Frida Kahlo: …They said how important women had been since their formation. They said they’d been female students since the mid-19th century so they’ve acquired a lot of women artists. But when we asked them to tell us what percentage of their collection was women it was 12 per cent!

Do you think that came as a shock to them too?
FK: I don’t think they were shocked at all.
KK: I think they will be shocked when they see it on the wall. It’s a whole different thing when you see it on a wall.

So what gave you the idea to put the spotlight on European museums?
FK: We decided to revisit a poster we made in the mid-to late 1980s. It just basically stated, ‘It’s even worse in Europe’, meaning gender representation. That was an anecdotal conclusion we’d come to from our experience in Europe. We saw that women artists were almost invisible. So fast forward 25 years and we’re invited back to do a lot of projects in Europe. So we started to think, let’s maybe take a look at this again and see if anything’s changed.
KK: So we sent these questionnaires out. It’s not the way we usually work. Usually we go and do the stats ourselves. In this instance we allowed the institutions to present themselves, and that’s interesting because it’s how they see themselves. 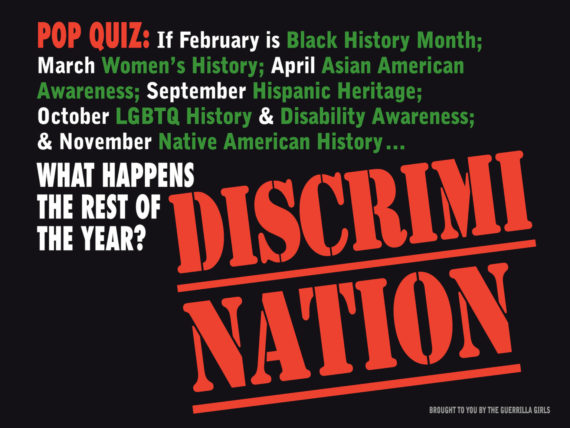 Does it shock you that 25 years down the line there’s still so much more to be done?
KK: Well, it continues to be a struggle, and some people are taking it more seriously than others.
FK: Can I say something? I think one thing that we were really interested in and that we are really concerned about is how museums in the United States are so beholden now to millionaire collectors that it’s hugely changing what they collect and what they are able to show. And that was one thing on our minds when we came up with this thing in the first place. We wanted to know if US museum practices were polluting Europe. That was one part of the ‘Is it worse in Europe?’ that we really wanted to explore. UK museums are mostly public institutions, but in the United States there are not-for-profit private institutions, and then there are also all these wealthy collectors with their own private museums.

That was your focus last year, wasn’t it? The way billionaire collectors sit on boards of major museums. First off, there’s clearly a conflict of interest there.
KK: It wasn’t just our campaign last year, it’s our continuing concern. It grew out of this examination of money and its negative effect on the production of visual culture. We’ve been looking at the phenomena of private museums all over the world now. There are hundreds, close to a thousand, private museums that are run by art investors. They’ve figured out a way for their art investments to become a quasi-museum, and they’ve figured out lots of tax advantages.

Is that any better than having kings and queens tell us what our culture is? Are we going back to that? American museums are run by the art collectors, the art investors, now. And it’s not questioned very often. The fact that American museum practices are infiltrating that system, and institutions everywhere are having to look for patronage, is a threat to a certain autonomy. 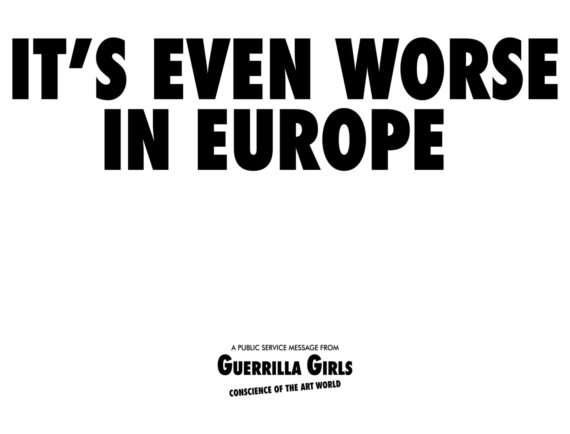 Changing the subject, the Guerrilla Girls have always resisted gallery representation. That must be quite hard.
FK & KK: No, no.

But you could have been rich by now.
FK: If we were represented by a gallery, we’d be attacking the gallery we’re in. In fact, we’re in a show in Paris right now, at the Michèle Didier gallery, and we said we’re not going to do the show unless we look at your record. And their record was, surprisingly, not great.

But museums and galleries have been into this ‘institutional critique’ for some time. Your work highlighting their shady practices would fit right in. In fact, the Guerrilla Girls were doing it before it all became so fashionable.
KK: But artists haven’t been doing it so directly. We’ve managed to bypass the commercial gallery system and the art market and we’ve been accepted into the institutions in a different way. I’m proud of that. And you say, ‘We could be rich.’ Well, maybe not all artists want to be rich. That’s not everyone’s criteria of success. It’s not ours.

Guerrilla Girls: Is it even worse in Europe?, Whitechapel Gallery, London until 5 March, 2017.