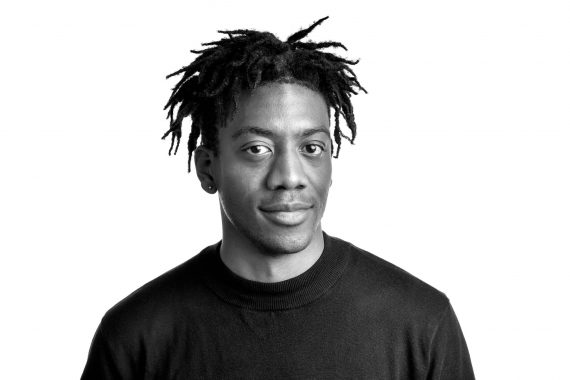 Last month, on Windrush Day, artist and a-n Artists Council Chair Jerome Ince-Mitchell presented a version of his performance Mayfly On Wheels. The work, which involves putting black paint through experiences and then using that paint and energy it has accumulated to create work in his Action Black series, was performed in solidarity with the #blacktranslivesmatter and #JusticeForShukriAbdiWahat, walking from Windrush Square to Parliament square.

Here he discusses what inspired him to create the work, how he feels art institutions are failing to address systemic racism, and the important role artists can play in this process.

What inspired you to create Mayfly On Wheels?
I had already been thinking about what I could do as an artist to express support for people like me at this time. I really felt compelled to do something and was approached by the ‘On Wheels’ project, a nomadic project space run by Eleni Papazoglou and Rosalind Wilson.

This is actually the second version of the work. Mayfly On Wheels in general is a piece that involves me putting black paint through experiences and then using that paint and energy it has accumulated to create work in my Action Black series. I look at it as kind of similar to the cycle of energy in a food chain, the work going through different experiences before I consider it a new cycle.

There are no limitations to the types of experiences the installation can be put through. However each new cycle must feature a political experience. In this way the work is a sort of metaphor for the complexities and richness I feel when I think about what it means to exist as a Black person.

So last month, to mark the anniversary of the Empire Windrush, I walked from Windrush Square in Brixton, through Brixton market, passed Tate Britain on route to Parliament Square ‘on wheels’ in solidarity with the #blacktranslivesmatter and in Solidarity with #JusticeForShukriAbdi , collecting energy, stories and responses along the way.

One of the key things that is being discussed at the moment is systemic racism, not only within society but also institutions. What are your experiences of this?

So it has been amazing to see my social media feed full of people sharing videos of people like Francis Cress Welsing, James Baldwin and Jane Elliott. The sort of thing I was looking at when I was 16 or 17 which helped me to understand my position in the world and how people possibly view me. It feels positive, particularly after the first protest I attended, which left me feeling slightly overwhelmed and inspired by how young the people there were.

I’ve been thinking a lot about how not only are our enemies often faceless, but so are our allies. I genuinely think that every person who feels marginalised by society or questions whether society accepts their existence should experience something like this – attending a protest or an event where people are genuinely putting their bodies on the line.

From studying other artists and activists from different time periods and countries, with a clear understanding that this systemic racism still exists, I am always thinking about what I can do.

What role can you play as Chair of a-n Artists Council?
I have been part of conversations at previous institutions on how to address these issues. But then you see how nothing has happened. I’ve even had conversations with vice chancellors or deans of academic institutions and been met with complete denial of any sort of issue or problem.

So, if anything, by being present and making a noise it shows an unwillingness to continue to accept the situation. It enables people who can’t be on the streets protesting to say to people in other positions ‘this is what is happening right now, we need to do something about it’.

What changes do art institutions need to make?
When I was studying I formed a group of students from various backgrounds whose sole purpose was to fight racism within art institutions. I remember one of the conversations was about the Black and minority ethnic staff membership at the college being around 15%, but I questioned whether they were just talking about the security guards being Black. There were definitely some tutors from different cultures, but it didn’t really represent the diversity of the students on their courses.

I have had conversations with tutors and lecturers saying they have experienced racism, not only from fellow tutors but students as well. This was just in the day-to-day of doing their jobs. A major issue they faced was that their positions were incredibly precarious because their contracts were not permanent. They weren’t able to rock the boat because they were worried that if they did it would mean they wouldn’t be employed again.

So essentially they weren’t in a position to make any sort of decision. It actually made me understand the power of the student body – whether it be Link Up at the RCA, or Radical at Central St Martins, the Forum at Goldsmiths, and another one at Slade. All of these groups were in conversation at the same time talking about systemic racism and what we could do as students within these institutions.

As students your time at a particular university or college is limited. Does this contribute to the lack of change?
When I was studying, we realised we could be very influential, but that the institutions almost play a generational game. They create a complaints procedure that is so bureaucratic that it takes forever, so they just have to wait out the half a year you have in terms of being organised before you graduate.

Fighting systemic racism then becomes this kind of mad sacrifice where you ask yourself ‘have I come to this institution to try and fight racism or have I come to try and get something out of my art practice?’

Do you feel lockdown has highlighted other societal issues?
One thing I found quite interesting was videos I saw from America where people were protesting their lockdown, saying ‘I want to go and get a hair cut’ – essentially just the normal social stuff that they had been accustomed to. A lot of people I know were saying ‘these people are idiots for doing this’, but I think this is too dismissive. They still exist at the same time as us, and it wasn’t isolated, there were thousands of people protesting the lockdown across the US and other countries, like Brazil.

I found it interesting that despite so many people dying from coronavirus people were still willing to risk their lives for what they believe. For some people it is wanting to return to some sense of normality, and this also highlights how so many people have found it difficult to process what is going on. Then you had other people using the opportunity to try and protest forms of social injustice.

I don’t necessarily have an answer…sometimes I wish the cultural theorist Stuart Hall was  still around to make sense of it all! But I do feel there is a connection between those two seemingly disparate things, in terms of the values our society holds dear at this moment.

What part can artists play in this process?
Over the course of lockdown I was thinking about how artists in general interact with institutions and what institutions are actually supporting artists during this time. At the height of the pandemic a gallery in Korea I was working with disregarded our agreement and actually asked me to send them money to send my work back. It was not only disrespecting the trust of our agreement, but also really disappointing that they did it at this time.

I think it’s really important for artists in general to understand the business side of things, but also look at which institutions are really supporting us during this time. We can actually try and help support them as well, so it becomes a two-way process.

To those that have shown really bad practices, we should hold them accountable. I truly believe that needs to be done on many different levels. On a professional level, this could be the lack of diversity and lack of accountability in terms of addressing issues of racism.

One thing I really rated was a conversation I had last year with the new Dean of the Slade, Kieren Reed, through my role with a-n. It felt like he had a real appetite for change, and that the years people have spent fighting systemic racism in institutions, it hasn’t been for nothing.

So there are people that are in positions of power trying to make a change, and they should be championed. So there are positive signs, but it is ongoing and more needs to be done.

Do you think lockdown has made people re-evaluate the value of art?
I certainly think there has been a questioning of it, and not necessarily in a good way. I read a newspaper article that claimed being an artist was the job that was the biggest waste of time. It completely disregards the billions that the arts generates for the economy – certainly more than football does! But the arts doesn’t receive the same support.

It’s interesting because if you look at the protests that are taking place and how people are willing to risk their lives to destroy or protect statues, irrespective of what side they represent, they are actually fighting over artworks.

In terms of the works that celebrate slavery, there are a lot of shared feelings within local communities that are only coming to the surface now that there is a desire to address it. But it is everywhere.

Are you hopeful for the future?
Part of the reason this movement is so amazing is that, growing up I and a lot of my friends who are Black were aware of a lot of these things. But now it feels like a lot of my friends who are white and of various other ethnicities are becoming aware of these things. I genuinely thought there would never be a time when I could have an honest conversation with people regarding racism outside of my race because the starting point is just different. It’s like a history lesson, some of which just seems so unbelievable. To get to the point where you accept that this stuff was even possible is long, which for many people is defeating in itself.

So yes, I do feel a sense of hope. Hearing someone like Angela Davis talk about how they have never felt anything like this before, it makes me feel like there has been a significant shift. Hopefully there has been a change in the mindset because if people who were around in the 60s – when there was a widespread appetite for revolution – are saying this, that feels special, and it gives me hope that we are changing things for the better.