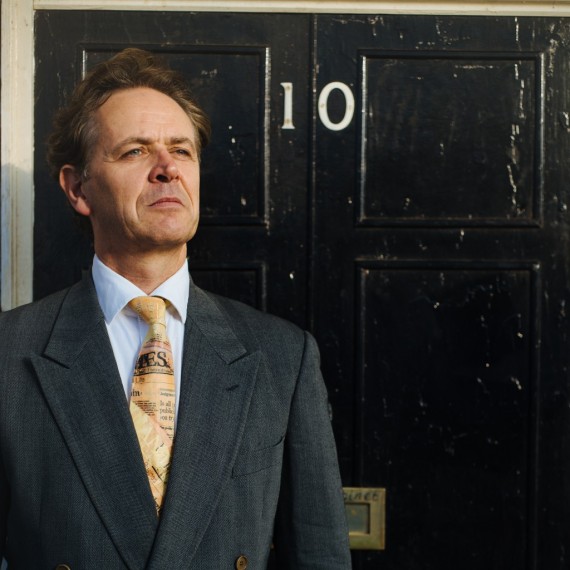 Joseph Young’s Revolution #10 project began life last year at the InTRANSIT Festival in Chelsea and Kensington, and the Brighton Digital Festival. It involves asking the public three questions about democracy and using their answers to create a performance in the style of an election victory speech, delivered by Young as his alter ego Giuseppi Marinetti.

The questions are:
1. If you were elected as Prime Minister at the General Election in May 2015, what is the first thing you would say to the nation?
2. Does democracy matter?
3. Complete this sentence: “We need a revolution because…”

On Wednesday 11 March 2015, the artwork produced from this process, titled A People’s Manifesto, will be performed at the House of Commons to an audience of MPs and their guests.

Why make an artwork about democracy and why call it Revolution #10?
I was concerned about the lack of interest in democracy and our political system that has developed in recent years, particularly since the expenses scandal. So I started to do some research and my initial inspiration was from a track on The Beatles’ White Album called Revolution #9 – a college of musique concrete which John Lennon referred to as a ‘the sound of protest’. It was made and released in 1968 at the height of political unrest, with the Paris commune, demonstrations against the Vietnam War, all of that radical energy that was going on, and I wanted to try and find a way to reactivate that.

How did you go about gathering answers to the questions?
It was a waiting game, really. I decided quite early on not to hassle people, not to appear that I was selling something. So I set up a visual presence in the street, looking like a politician and wearing a suit and a tie. I had a campaign stall with a ‘Revolution #10’ sign, lots of political-looking leaflets on the table, a few visual aids like a typewriter and a megaphone that suggested something to do with campaigning. And I’d wait and people would come up and go, “What’s all this about then,” and then I’d start talking to them.

And what did you hear?
What I expected to hear was a lot of pessimism and disengagement, but actually as soon as you probe people and give them a bit of space they open up. I guess what they see is the genuineness of my intentions in asking these questions – I’m not trying to sell them a political position or correct them in their political views. People are passionate, they are engaged with politics, they’re just fed up with the way it’s run now; they haven’t divested themselves of the idea of democracy, they just don’t believe it functions as it should.

How did you come to be performing at the House of Commons?
It was always the intention from the start of the project last June. We had the engagement of our local Green Party MP, Caroline Lucas, who has been instrumental in making this happen. I felt it was important to do it, even if we only get a handful of MPs turn up; if they hear verbatim what people have said to me, presented in a coherent way, then maybe that’s worth something.

What form will the performance take?
We’re going to present it in the style of a press call, with a reception for half an hour when people can get refreshments, and there’ll be a sound piece of the interviews playing. Then I’m going to perform a new piece based purely on online submissions to the questions, which is something I haven’t done before and which reflects the national spread much better. And then I’ll take questions.

Are you pessimistic or hopeful about the forthcoming General Election?
I just wish that all of our political parties, including the party I’m a member of, would be bolder in their assertions and visions for this country. I hope we see a change of government at the next election, but how that manifests itself and how bold that government will be if it gets into power, I fear for that – I fear that we don’t have leaders who are up for the task.