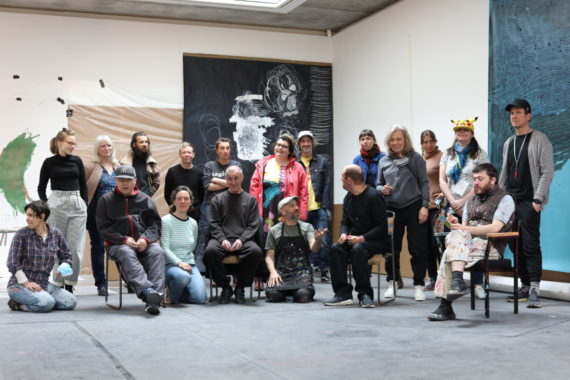 Kate Adams is an artist, advocate and parent activist, founder and CEO/Artist Director at Project Art Works, a collective of neurodiverse artists and activists, based in Hastings who have been shortlisted for this year’s Turner Prize.

The term neurodiverse refers to a group which includes both neurodivergent and neurotypical people, and the collective also includes paid and unpaid caregivers who help each other to navigate through the complexities of health and social care systems.

Whilst the Turner Prize has historically centred on individual artists, the focus on collectives, and Project Art Works’ nomination for this year’s prize, has upended the status quo. Although the lockdowns of the last 18 months have revealed the vulnerability of the establishment gallery model, grassroots activists remained responsive and vibrant, and were able to adapt.

Jurors looked beyond the gallery to recognise significant community based practice. Project Art Works’ activism is situated at the intersection of studio supported practice and social care systems providing a radial locus for change.

Here Adams talks to Sonia Boué, a multiform artist, writer on autism and art, and a-n Board member, about the history of the collective and how the systemic intellectual ableism that has excluded neurodivergent artists with high support needs from mainstream art prizes and events needs to change.

We’re always adjusting the message about who we are. Collective was a term applied during our recent collaborations and partnerships for the Explorers project, but we feel more like an interdependent community of people. Dependency is a state that is feared and very often derided in our society, but it’s actually not alien to any of us. [In this society] any kind of dependency generates vulnerability, because our systems of support aren’t stable. They shift and change with political power and colours. A more literal way to describe us would be as an interdependent association of neurodiverse artists and makers.

Why do you need to keep adjusting your message, and how do you include caregivers in your work?

The reason for defining what we do is to manage the message to the outside world, because we are aware of the weight of preconceptions and because the political, cultural and social context is constantly changing. Some of our studio artists and makers may not be able to assimilate the concept of collective. We don’t assume equivalence of understanding among us, it wouldn’t be fair and it wouldn’t allow for what we don’t know.

We recognise the ways in which support systems create vulnerability for people, so we try to create a sense of robust security for artists and caregivers. The message is, call us anytime, contact us and we’ll find a way to help you.

It’s imperative that caregivers are included because we need their lived experience within our organisation. If we didn’t do this people would be much less embedded with us, and we wouldn’t have the depth of relationships we have developed. We get to know the significant others in peoples’ lives to support the stability of their care, so they can attend the studios. If their care packages fail, they may no longer have the support they need to attend. This is what it means to be vulnerable.

Project Art Works began as a project for children in a special school. How did the organisation grow to become an NPO?

When I started Project Art Works my son Paul was at a special school, so that was the focus of my interest. I wanted to explore how children with such very different natures and personalities could reveal that through mark making. It seemed to me that the disabled children in Paul’s class were helped to make things to look like art, rather than explore materials and processes in a way that was authentic and to accept the results as art.

Ever since, we’ve been responsive to the lived experience of people with complex needs, their caregivers, and the forces that impact their lives. In Transit is a particularly relevant project. When Paul was going through the transition from special school to adult services his needs were assessed. This was a very hard document to read because it was a description of what he was unable to do, of needs and risks, but not of him. All the poetry of him, the way he used to say hello to stars, and how he liked to sit under a tree in the rain, all of that was missing. So we thought about collaborating with artist filmmakers to enable young people like Paul to make a film about themselves, to sit alongside their transition assessments.

We worked with social workers, adult social care and transition services, and commissioned artists like Ben Rivers, Andrew Kötting, Shona Illingworth, and many others, making 46 portraits over a five year period. That was a big project, funded through the Paul Hamlyn Foundation, and those kinds of projects were seminal. They took us on another step, and helped us make connections with artists and facilitators, as well as with neurodivergent artists and their families.

So, Project Art Works has grown slowly by responding to need, rather than with any other intention like being nominated for the Turner Prize!

Studio supported work is often misunderstood and labelled ‘outsider’ art. How can intellectual ableism be countered in the arts?

We avoid the terms art therapy and ‘outsider’ art. Neither apply to Project Art Works or our artist and makers.

We didn’t ever set out to promote neurodivergent artists and makers either. What we’ve done is to create artistic propositions that enable people to leave a trace of themselves, and to open up pathways for creative development and potential. It’s a ‘neurotypical’ construct to identify people as artists, when they may not be able to do that themselves, and when it includes a certain trajectory for recognition and value. It’s the process of enabling people to become visible that’s important, and that’s a political act, and where the activism of the organisation exists.

How does an artefact make your neurodivergent artists and makers more visible?

The artefact is the seduction. I always think that the artwork on the wall is the tip of the iceberg, and underneath it is all this extraordinary other state of living. I feel the art is a vehicle for making those things visible.

I also think intentionality is very valued by the art world rather than the artefact itself, and that’s where you hit big problems in terms of equity and value. There is no objective, intrinsic value in any work of art. Like anything else (other than life sustaining food and light) value is something we as humans apply to things. Value is slippery territory in relation to intentionality and neurodiversity.

As a neurodivergent artist myself, I’m often unimpressed with mainstream arts events because they feel excluding and irrelevant. Is the Turner Prize nomination relevant to your artists?

For some of our artists it is important, partly because of the sudden recognition and assignment of value. Also, we talk a lot about inclusion, so that is actually about being part of society, culture, life, community, and this is part of that. So, in that sense it’s a really significant thing. But for many of the studio artists it’s of no interest at all.

Why do we need to see into neurodivergent worlds?

The great joy of a neurodivergent world is that it’s an extra sensory perception of things, and that’s an advantage in many ways. Although it can be very hard to be this way in our neurotypically constructed world. The real stuff is the sun coming up in the morning, the cycles of the moon, the tides, these are realities you can still trust (for now). The stoics said that there is nothing you can control other than your own judgement. People who are unencumbered by cultural baggage can be really good proponents of that and we need to listen to them.

The Turner Prize Exhibition at Herbert Art Gallery and Museum opens to the public on 29 September and continues until 12 January 2022 as part of Coventry’s UK City of Culture 2021 programme.