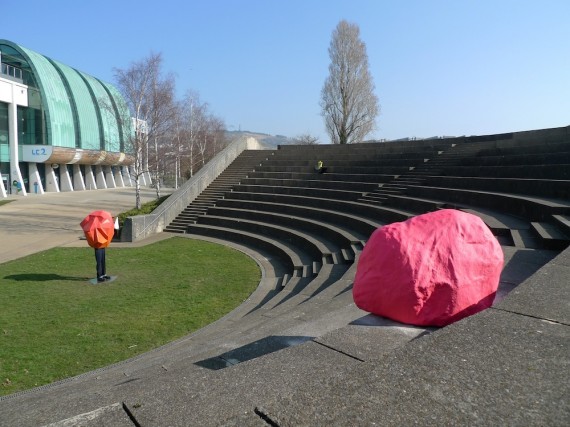 Michael Stumpf is one of five artists who’ve produced new works for Art Across the City, an annual city-wide programme of public art in Swansea that launched on 21 March and runs until 1 June 2015.

Having originally trained as a stone mason, Stumpf studied Sculpture at the State Academy of Fine Arts in Karlsruhe (1996-2001) before  moving to Glasgow where he received an MFA from the Glasgow School of Art in 2004.

In Swansea, he presents The Future Is A Process, Objects Converse On A Matter Of Mutual Concern, three sculptures situated in an amphitheatre and including a boulder wearing Welsh jeans and tap shoes, a ceramic coffee maker, and a pink meteorite.

Were you familiar with Swansea before Art Across the City?
I’d never been there, but I was aware of Swansea and that it was in Wales and by the sea. I didn’t really have an idea of it though. The funny thing is that where I’m originally from, Mannheim in Germany, is twinned with Swansea. So I was aware of that fact but not the actual place.

How important is the context – an outside amphitheatre – to the work you’ve created?
I did a site visit last summer, discussed various options which fell through, and then the amphitheatre was suggested which I liked. I think the context of work, whether in the gallery or whatever, is pretty important and so the amphitheatre presents this quite straightforward context – a place to congregate, basically. And from that there developed this idea of these sculptural objects coming together for a discussion.

So the amphitheatre had an influence on what you made?
The amphitheatre was the gift in the equation; it made me think about how I can use it and what these things can do within that context – I mean I’m not sure that I would build an amphitheatre in a gallery, although that might happen now after this experience. So that context triggered a lot of things to come together. The public context is also important. Although some of them may look a bit like you might expect public art to, in my eyes the setting gives them a different function; there’s the potential for them to become something else.

Before you were an artist you trained as a stone mason – has that informed your use of materials?
There’s a certain timeline within the work, expressed through the different levels of materials. There’s the resin, there’s fabric, there’s sometimes bronze or aluminium or steel, and then there’s clay. And all these things have a different shelf life – there’s a sense of time embedded within the materials. Having trained as a stone mason informs my work on a lot of levels, from a technical view, but also in terms of the use of materials and that sense of time. In my mind there’s a strong connection to it, but I stayed away from it for a very long time – the first piece I’ve done using stone was last year in a show at Glasgow School of Art. When I started studying I went through this whole thing of forgetting what I’d learnt, and then gradually brought it back in again.

There’s something quite comic about the sculptures, particularly in this setting. Is that intentional?
I try to have an element of humour in the work, which you could say is always quite difficult in visual art! And in this one especially I’m tip-toeing around the border. I’m not sure that I would say comic, but there’s definitely a humour or absurdity within it, which I think is important – especially within public art.

One of the sculptures features a ceramic Bialetti coffee maker. Does that object have a particular significance?
There’s an underlying interest in science-fiction in the work, and to me those coffee makers are like one of those great 20th century innovations that at the time must have looked like something from the future. Also, politically they’re this metaphor for technological developments that enable the individual – they basically meant that people could make quality coffee in their own house. So I am interested in that particular design – although I don’t have that one in my own kitchen!

You’ve described the sculptures as having ‘a debate about the nature of their thingness’.
The idea for the whole thing was to somehow reinstate, or energise, that place – actually energise is the wrong word, maybe more to reinvent that place. And these objects are a metaphor for what might potentially happen there. So the objects discuss their matters, and whoever comes there can potentially discover other matters, or something around or way beyond those objects. I do think that this is something that sculpture can do, or made objects can do – create a place where you can relate to and think about what these three-dimensional things are in the world.

Art Across The City continues in Swansea until 1 June 2015. The other artists presenting new work for 2015 are: David Cushway, Graham Dolphin, Colin Priest and Emily Speed. More information at www.locwsinternational.com