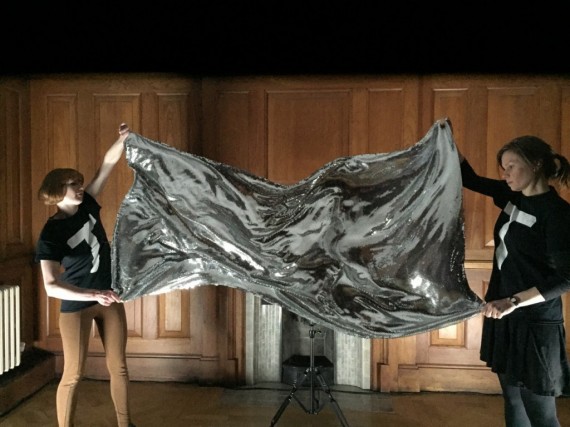 Sarah Kate Wilson is an artist, curator and researcher. Recently nominated for 2014 New City Art Prize for the Visual Arts at MK Gallery, Milton Keynes, she has exhibited widely including at The Newlyn Gallery, Penzance, and WW Gallery, London. Her latest exhibition as curator is Painting In Time at The Tetley in Leeds, co-curated with Zoe Sawyer.

Originally from Yorkshire, Wilson is currently based in Hackney, London, and studying for her PhD at Leeds University until 2017.

Why did you choose to exhibit at The Tetley?
It’s such an interesting space to exhibit painting. I didn’t want to use a pristine white cube gallery, and its art deco features provide different challenges for showing work.

How were the artists selected?
I’ve worked with a number of the artists before, but also forged new relationships through the show. I wanted a real mix of high profile names and emerging practitioners, both cross-generational and from different geographical areas. It’s taken two years to put it together with lots of emails and Facetime conversations, but I’m really pleased with the results.

What links the artists?
They are challenging ideas of what painting can be. Their work is often in a state of flux, constantly evolving and in some cases only existing for the lifespan of the exhibition.

What are your personal highlights of the show?
Natasha Kidd’s work features four paintings that are connected to a system of pipes and a pump. White emulsion paint is pumped around the gallery space, with gallery assistants releasing valves that allow the paint to overflow daily onto the gallery floor.

Clare Ashley has created a giant, inflatable painting. Every hour air is released and the 15ft work deflates. It’s a bit sneaky, a bit cheeky…but I like the idea that it plays on assumptions. Viewers can walk around the rest of the show, come back and the work has altered.

Yoko Ono is also involved. What did she bring to the project?
She has been really influential in terms of my PhD research. It was great to include one of her DIY instruction pieces from the 1960s called Painting to Hammer a Nail. It invites the audience to hammer nails into the wooden seat of a toilet. The piece connects music, dance, theatre and sculpture – a broad spectrum of practices.

You are also exhibiting your own work in the show. Tell us more about your painting.
I call my work ‘Durational Paintings’, referencing the way they expand the space between blank canvas and finished painting. They continue to metamorphose after they exit the studio, like much of the work on show here.

My piece Zumba requires two gallery assistants to hold a sequined fabric painting and perform a fifteen second dance routine at intervals throughout the day. Bathed in strobe lighting the sequins shimmer, creating an optical effect that transforms the fabric surface into silver liquid. I see the gallery attendants as custodians of the work. They help keep the work alive like a friend who cares for your pets when you’re away on holiday.

You are now based in London. Can you see yourself ever moving back to Yorkshire?
My life and studio is in Hackney but I’ve worked in a variety of places, including New York. I’m currently working project-to-project rather than being studio based so it seems strange to be pinned down to one particular area. I think this is perhaps the way things are going in general, partly due to living costs but also the more collaborative ways artists are working today.

However I’ll always have a connection with Yorkshire. I grew up here, my family still lives here and I’m currently studying for my PhD at Leeds University. Also, there is a thriving artists’ scene here that is exciting to be part of.

What’s next for the show?
I’d love to tour the exhibition. We have applied for various bits of funding to do this and it would be great to continue to work with this team and group of artists again. The proof is in the pudding and we will have to see if it comes off…

Painting In Time continues at The Tetley, Leeds, until 5 July 2015. More information at thetetley.org/painting-in-time