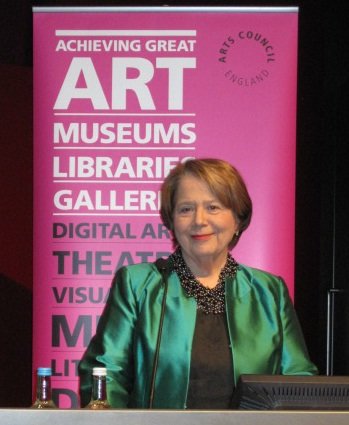 Dame Liz Forgan, the outgoing Chair of Arts Council England, has made a passionate defence of the ‘arm’s length’ principle of arts funding, urging her successor Peter Bazalgette to make the protection of this idea one of his top priorities.

Speaking at the British Museum last night (15 January), Forgan – who was asked to step down at the end of her first term by the then Culture Secretary Jeremy Hunt – said: “Politicians and artists are different fish who shouldn’t really share the same frying pan. It’s the job of the ACE Chair to… deliver their [politicians] big priorities, understand their pressures, take as much of the strain of spending cuts… and then patrol the ramparts like a panther to protect the arm’s length principle and freedom of artists from the considerations of party politics.”

Her speech, titled A Farewell to Arts, was to mark the end of her tenure as ACE Chair. In it, she criticised Education Secretary Michael Gove’s plans for the new English Baccalaureate (EBacc) and specifically the absence of arts subjects from the new qualification for 16-year-olds in English schools. She said that Gove risks “robbing a generation of its birthright and failing in the duty we all have to continue our culture.”

Forgan described Gove as having “almost the most important cultural job there is” and called on him to make a statement “officially setting out his belief in the importance of cultural education.”

In addition to her attacks on Gove’s plans, she called on the government to avoid further cuts to the arts, pointing out that arts funding from general taxation represents just 0.05 per cent of the national budget. She said: “The saving is far too tiny to make any impact on the serious challenges in the national budget and the damage is deep and lasting.”

Read the full transcript of the speech here.

Listen to a podcast of Dame Liz Forgan’s speech: