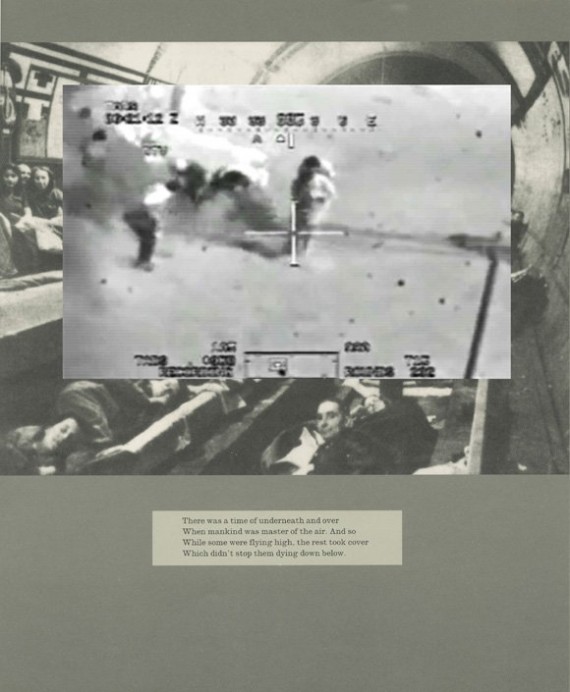 Adam Broomberg and Oliver Chanarin have become the first duo to win the Deutsche BÃ¶rse Photography Prize. At an award ceremony held last night at The Photographers’ Gallery in London, the collaborators of 15 years were presented with the £30,000 award by film Director Mike Figgis.

The prize is awarded to a photographer of any nationality for their significant contribution to the medium of photography in Europe, either through an exhibition or publication. The 2013 award was for work between 1 October 2011 and 30 September 2012.

Broomberg and Chanarin were selected for their challenging War Primer 2 – a limited edition photobook comprising just 200 copies. The project involved the artists physically inserting images culled from the Internet and mobile phones that focus on the so called ‘war on terror’, into Bertolt Brecht’s publication War Primer (1955). The original offers an unsettling combination of World War II newspaper clippings with short, four-line poems which he referred to as hieroglyphics. Broomberg and Chanarin’s intervention serves to unravel the manner in which contemporary conflict is imaged and disseminated with due diligence and intelligence.

Given their prolific output over the past twelve months in particular, there should be no question of the duo’s impact and importance to the direction the medium of photography is taking. The decision does, however, represent something of a crisis in what constitutes photographic practice today. It throws out traditional notions of authorship, with appropriation and recontextualisation becoming increasingly commonplace. Traditional modes of documentary photography, such as that of Chris Killip, one of the other finalists, feels almost radical by comparison.

In their acceptance speech, the pair paid tribute to the late Gigi Giannuzzi, founder and publisher of Trolley Books, who released the duo’s first photobook Ghetto in 2003: “We would like to thank somebody who is no longer with us, Gigi Giannuzzi, who died 200 years too early.” Pointing heavenwards, they said: “He would be proud, though he’s probably not up there but wherever the drinks are being served.”

Brett Rogers, Director of The Photographers’ Gallery and non voting chair, said: “The jury awarded the Prize to Broomberg and Chanarin for their bold and powerful reimagining of Brecht’s War Primer. They applauded the way in which the project pushed the boundaries of the medium, exploring the complex relationship between image and text while drawing on elements from both the past history of photography and the present image economy.”

It’s been an eventful week for the pair, both personally and professionally, with the award coinciding with Broomberg’s wife giving birth to their second child as well as the launch of their hugely anticipated and most controversial work thus far, Holy Bible – a photobook in which images of violence, calamity and disaster mined from The Archive of Modern Conflict have been overlaid on pages of the King James Bible.