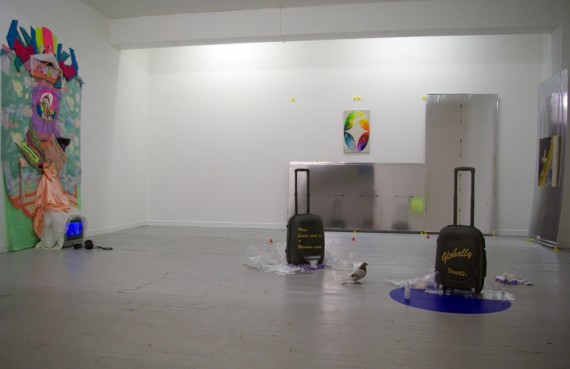 Now in its tenth year, Embassy Gallery’s Annuale festival is a citywide programme of visual art that gives a collective voice to artist-led initiatives in Edinburgh and beyond. The 2014 edition brings together existing activity including Leith Late and Collective Gallery’s Satellites programme, alongside pop-up exhibitions in ice cream parlours, choir recitals, distributed publications and walking tours.

The exhibition Let Me Tell You a Story About My Dust Pile at C28, ECA, which runs until Wednesday 25 June, finalises a collaborative project by Morgan Kinne and Stephen Kavanagh. It uses dust from ten sites on route from Embassy Gallery to C28, to build a layered body of sculptural work.

“The Annuale is a great opportunity to access the artist-led scene and provides a forum to present completed work to a collected audience,” explains Kavanagh. “The ten sites used [in Let Me Tell You a Story…] are a response to the festival’s tenth edition. We cast a plaster cube mixed with ten layers of the collected dust. This was then excavated to extract a cylindrical sample of the sculpture’s own history.”

“The piece was inspired by a news story I read in 2007,” adds Kinne. “A dead blue whale’s life history was scientifically analysed from a foot-long sample of earwax extracted from its skull. We decided this was a good metaphor for our collaboration. Layers present time and we wanted to make something that explains its own history, much like the Annuale does year-on-year.”

Other projects and events to look out for are Slide Night # 2 at Basic Mountain on 25 June with readings and performances form Paul Becker, David Sherry and Thomas Whittle; HOT DOG PARTY, an event on 28 June featuring Beagles and Ramsay and Paul Rooney amongst others; and Impressing the Czar on 4 July, an evening of performance and interactive work at Basic Mountain, facilitated by the collective A Band Apart.

“This year we have more distributed projects, which include artists from outside Edinburgh through publication formats that Embassy distributes on their behalf,” explains Embassy committee member Ciara McDermott, now in her second year of organising Annuale. “This builds on existing relationships with other cities. For example, SPUR – a poetry print/publication from artists in Leeds – submitted their proposal on the back of our residency exchange with Mexico Project Space in Leeds last year.”

The festival has also commissioned a text by Sian Robinson Davies, The Asking, Taking and Giving of Artist-Led-Activity. Using her experience as a committee member at Rhubaba Gallery and Studios (another artist-led gallery in Edinburgh), Davies writes about how Annuale helps to sustain artist-led activity, and outlines some of the benefits of being part of an artist-led organisation.

Coherently expressing Annuale’s ethos, Robinson Davies’ text includes the assertion that one of the many good things about artist-led activity is ‘feeling that our various abilities can come together to make something bigger than we are able to achieve individually…’ Annuale is a clear example of this approach in action.

Annuale 2014 continues until 6 July at various venues in Edinburgh. www.annuale.org