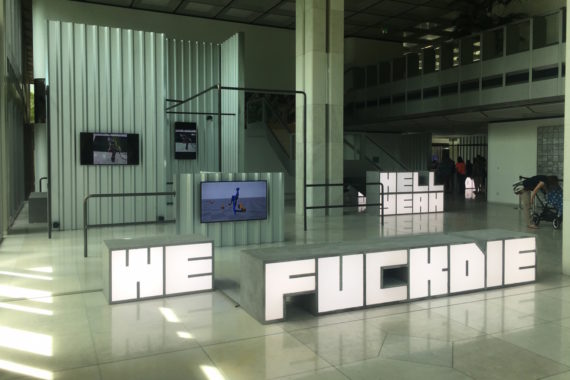 The German artist, filmmaker and writer Hito Steyerl has taken the top spot in the 16th edition of ArtReview‘s annual Power 100 list.

Steyerl is known for her videos and installations that take cues from historical and political narratives. Tackling digital culture and identity, through her performative lectures and teaching she is often outspoken, particularly with regards to the ‘corrupting power’ of the art market.

Earlier this year she took part in Skulptur Projekte Münster, which is held every ten years, and at the 2015 Venice Biennale she was part of a group exhibition at the German Pavilion. Her work has also recently been shown in solo and group exhibitions in Buenos Aires, Copenhagen, Düsseldorf, Gwacheon, Helsinki, New York, São Paulo, Turin and Vienna.

Oliver Basciano, ArtReview’s international editor, described Steyerl as “an influence and an inspiration to many younger artists”, adding that she “looks to disrupt power networks that you can probably see run through the Power 100 and run though the art world.”

The Power 100 is compiled each year in consultation with an invited international panel of writers, artists, curators and critics. An individual’s or group’s ranking is based on their ‘international influence over the production and dissemination of art and ideas in the artworld and beyond over the past 12 months’.

Other artists named on the list include French sculptor and filmmaker Pierre Huyghe who is at number 2. He was included for ‘work focused on humankind’s impact on the environment’. Photographer Wolfgang Tillmans, who has spearheaded artistic campaigns for the UK to remain in the EU and against the German rightwing AfD party, comes in at number 11.

Chinese artist and activist Ai Weiwei, who topped the list in 2011, is at number 13 on the list, while American video and performance artist Joan Jonas, who will have a retrospective at Tate Modern next year, is a new entry at number 14.

African American painter, printmaker and film-maker Kara Walker, whose work highlights the perversion and violence inherent to American culture, is new to the list, entering at 56. Also on the list for the first time is American Kerry James Marshall, at 68, after his critically-acclaimed retrospective toured the US this year.

Other artists on the list include Jeff Koons, who is at 54, Yayoi Kusama, at 55 and Marina Abramovic at 89. The only British artist to feature is Liam Gillick, at 52. There is no place for Damien Hirst, despite his enormous show at two venues in Venice this year. He was last on the list in 2012.

Britain does, however, have strong representation from gallerists and curators. Maria Balshaw, new director of Tate, is a new entry at 16. Gallerist Sadie Coles is at 34, while Jay Jopling, founder of White Cube, is on the list at 47.

A female artist topping the list for the first time will come as welcome news in a week when an open letter has been published by ‘art world workers’ calling for an end to silence around the issue of sexual harassment within the art world. Nevertheless, men do still far outweigh women on the list, with there being 45 women in comparison to 83 men.