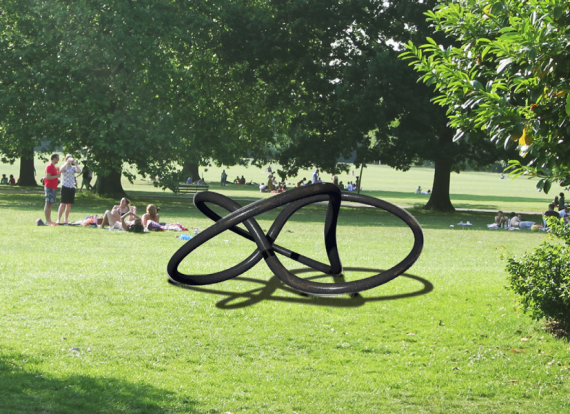 Following a public consultation in which over 400 people gave their views, Conrad Shawcross has been selected to create the new commission for Dulwich Park in south London. The work will replace a much loved bronze sculpture by Barbara Hepworth, Two Forms (Divided Circle), which was stolen by suspected scrap metal thieves in December 2011. One public voter described Shawcross’ proposal as “Closest in spirit and form to the Hepworth.”

The new work, Three Perpetual Chords, will be a series of cast iron sculptures, each created in relation to the mathematical patterns found in music. The artist describes these forms as “visual descriptions of musical chords.” Roughly human height, the sculptures will be sequenced, leading visitors through an unexpected series of encounters in the park.

Shawcross said: “I am delighted to have been commissioned to create this piece for Dulwich Park and it is an honour to have been selected given the legacy of Barbara Hepworth. The sculptural sequence I have proposed will provide a new route of navigation through what is already a beautiful park, providing opportunities for play, reflection and leisure.”

Shawcross has achieved international recognition and critical acclaim for his work – most recently for his exhibition Timepiece at the Roundhouse, London. His work was also included in the 55th Venice Biennale, in the collateral exhibition Glasstress.

Three Perpetual Chords was selected through a commissioning process managed by the Contemporary Art Society who worked alongside the Dulwich Park Commission Steering Group, which was set up following the theft of the Hepworth sculpture. The shortlist also included proposals by Anya Galaccio, Ryan Gander and Eva Rothschild. It is estimated that the new work will be installed by summer 2014.

Fabienne Nicholas, Head of Art Consultancy at the Contemporary Art Society, said: “Conrad’s series of sculptural works give not only aesthetic pleasure but something playful too – they, like the Hepworth, invite a human scale interaction.”