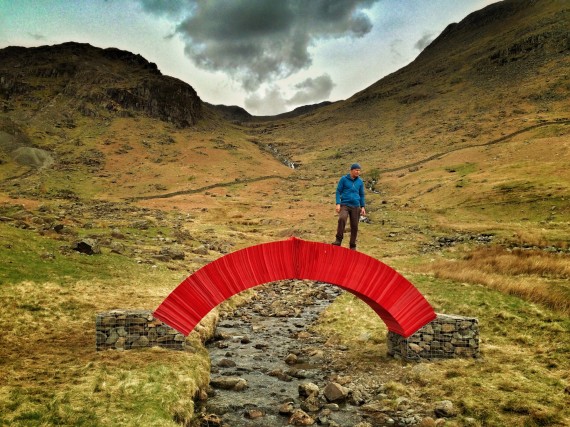 A free-standing bridge made entirely from bright red paper has been unveiled at the foot of the Helvellyn mountain in the Lake District. The bridge, created by environmental artist Steve Messam, is part of the Lakes Ignite programme celebrating music, comedy and art across the area.

Made using using no glue, screws, bolts, fixings or other supports, the bridge has been constructed from one long piece of bright red paper (which originally measured over 10 miles in length), cut into 22,000 sheets.

The finished structure is five metres in length, with a four metre span over a flowing river. The top of the arch stands two metres above the water. The bridge’s gabions are filled with over three tonnes of stone from the gravel beds in the river.

Messam, who has been creating temporary artworks in Cumbria and the Lake District for the past ten years, said: “The Lake District has a long and important history in the perception of landscape and aesthetics. PaperBridge is part of this continuing and evolving legacy.

“The piece is made for and about the landscape of the Lake District, based on local stone bridge construction dating back to Roman times. On an aesthetic level the piece acts as a focal point within a vast open landscape, the bright red colour drawing the eye and interfering with the natural environment, while at the same time creating compositional balance with the green backdrop and flow of water.’’

Usha Mistry, project manager for Lakes Culture, which commissioned this and other artworks, added: “PaperBridge is part of a proactive project that demonstrates how this unique area has resonated with artists in the past and continues to inspire makers and performers working across a vast array of art forms, firmly emphasising the Lake District’s important role within the UK’s rich cultural life.’’

PaperBridge can be found between two parallel paths in the Grisedale Valley, a 2 mile walk from Patterdale, OS grid ref: NY 362 144, until 18 May.

Artist based in London and part of Programmes development team at a-n. @spalmerama