Artists and copyright: "Everything is a remix" - a-n The Artists Information Company 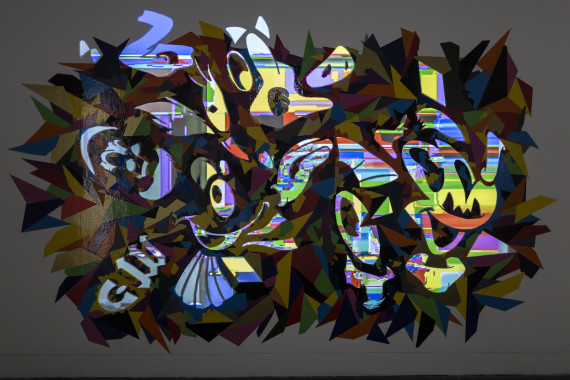 “I remember going through art school and never at any point having any conversations around copyright or what it meant to be working with somebody else’s image. I was really interested by this lack of knowledge that we have; I thought that a really good way to work that out would be through a show.”

Hannah Pierce is discussing the impetus for Common Property, the latest exhibition to open at Jerwood Space, London. The guest curator for what is the 22nd exhibition in the Jerwood Encounters series – and the first to open during Jerwood Visual Arts’ 10th anniversary year – Pierce proposed the exhibition after noting the lack of copyright education for visual artists compared with photographers, designers and illustrators.

“I was interested in using the exhibition as a body of research,” she says, “to learn how copyright was impacting artists by actually working that out with them.”

“The show is not to belittle the rights of the original creator of an image,” says Pierce. “But it raises questions about whether it’s realistic for a producer of creative content to retain complete exclusivity over its future use, now and particularly in the future, given the unprecedented exchange of information that takes place online.” 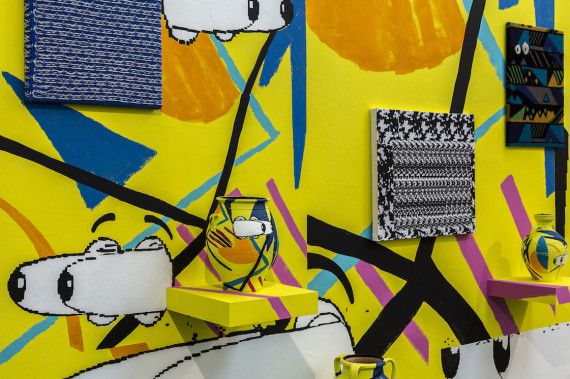 Influential to the ideas behind the exhibition were high-profile court cases involving artists, including the 2015 copyright infringement ruling against artist Luc Tuymans in Belgium. “He was found guilty of plagiarism for a painting that he had done of a photographer’s image. That’s quite a standard way for an artist to work, with found images.”

Pierce also mentions the UK’s own changes to copyright law that now allow appropriation for use in parody in certain circumstances. “It’s an interesting shift but you don’t really see what the repercussions of legislation changes like that are until you get court cases where they get played out.”

Owen G Parry has avoided the copyright problem by emulating the methods used in fan fiction – a largely online subculture based on fans generating new content and creatively riffing off the works of admired celebrities, films, novels or TV series – to explore the freedom inherent in these creative tributes.

For Parry, fan works build on the creation of the original author, taking it in new and often previously unimagined directions. The irreverent act of ‘shipping’ – the practice of fans pairing two fictional characters or actual celebrities together in an imagined relationship – is a case in point. In this instance, Larry Stylinson, a hybrid of Harry Styles and Louis Tomlinson from the boy band One Direction.

Referencing this vast subculture and narrative, Parry’s work Larry!Monument is an installation that takes as its starting point the methods ‘Larry’ fans use to evidence that the relationship is real. Parry’s video Larry Shipping Ritual sits alongside a number of fetishistic objects and introduces the viewer to the terminology of fan fiction – xenokink, deathfic, bodyswap, boypussy – alongside absurd and decadent diagrams and morphed faces. “It’s a way of seeing how fans work and the methods they use,” says Parry. 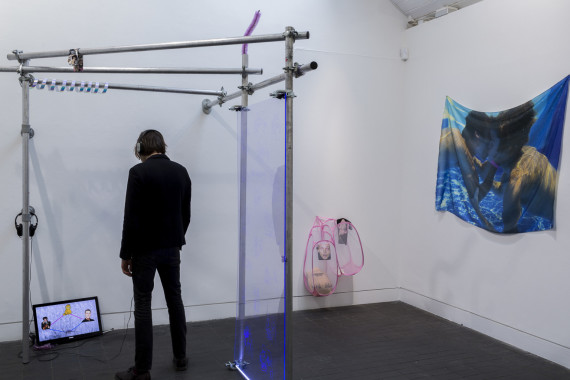 The artist has collaborated with fans for previous incarnations of the project, including Karukara, who documents Parry’s performance events through her drawings and posts them online to become a part of the Larry story.

“One of the ongoing jokes in the piece for me is that fans can also upstage the artist,” says Parry, who as part of the process for making the work decided to become a fan, exploring what this would mean for his creative process and the different freedoms and constraints that might occur. “What these fans are creating, within that commercial culture, is something that can subvert that [original] work. It’s less reductive and more generative.”

With his installation for Common Property, Parry has now come full circle, reclaiming the space that being an artist gives him to reflect on fan culture and copyright. As a fan, he expanded the idea of fandom, hosting a fan club for live art event last year, where Pierce first encountered his work.

“It was one of those art events that you go to and you remember that art’s meant to be really fun and enjoyable and funny,” says Pierce. “One of the things that is really exciting about the show is that there is a lot of humour in all of the work.”

Birmingham-based Antonio Roberts, who has built up a reputation for his glitch art works, celebrates remix culture in his work. Where Parry works with the gift economy of fandom, Roberts is involved in the debates around Creative Commons and sharing upon which the Open Source community is founded.

“Everything is a remix. Lots of people’s ideas are always formed from others,” says Roberts, who releases back all his own artworks and source codes online under a Creative Commons licence. “Without this whole remix culture, a lot of what we know and hear would just not exist.”

Roberts’ technically complex and playfully innovative works combine programming, video and collage (both digital and physical). Of his two works in the exhibition, his large vinyl wall-based piece (pictured top) is assembled from abstracted segments of well-known images and icons from popular culture, the negative spaces filled with an ever-changing glitched projection of a distorted and unrecognisable film.

“It’s reworking, remixing it, and there’s always a bit of a blurry line to say that you can use something if you alter it. I wanted to show that I’ve made something new from [the original work], which hasn’t taken away from the value of it,” says Roberts. 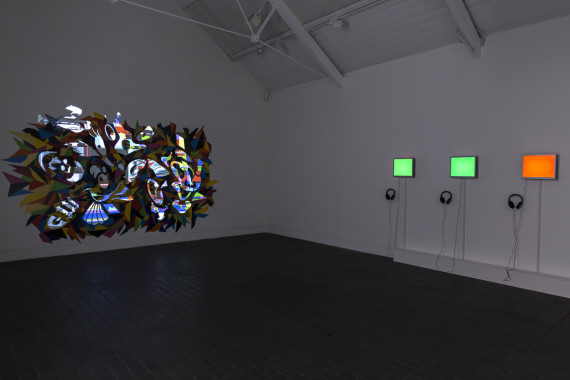 The resulting installation comprises four screens of flashing colours that each correspond to particular notes from their soundtrack. The data-perfect but imperfect sounding bleeped tunes are reminiscent of ’80s computer game soundtracks – a far cry from the original song.

The copyright conundrum this throws up goes to the heart of the debate around creative ownership in the digital age. “It’s still the same song, the data is still the same data, it’s just being reinterpreted,” says Roberts. “So, is that an infringement of copyright?”

Common Property is at Jerwood Space, 171 Union Street, London until 21 February 2016. A range of talks and events, including Owen G Parry’s third fan club take place over the course of the exhibition