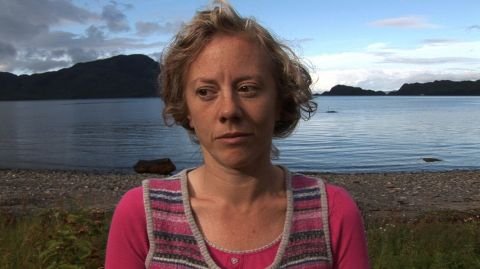 08.02.12 – For year-long project Stay the Same, Sam Firth is filming herself every day at exactly the same time in exactly the same place, on a remote Scottish peninsula near her home on Knoydart, an isolated community of just over 100 people. “The film is an attempt to depict myself in time, standing still while it flows around me. A year of life experienced in one short viewing.” Stay the Same is funded with development funds from the UK Film Council, Creative Scotland and in kind support from the Scottish Documentary Institute.

The Telegraph article suggests that Firth’s twenty-minute film will equate to around 61 hours of work, based on her filming herself for ten minutes a day: thus the assumption that £10,000 of funding she has received will work out to £160 per hour.

However, as one comment on The Telegraph‘s site more correctly points out: “The calculation makes no deduction for materials and no allowance for any preparation or editing work. By my calculations she is being funded about £27 per day – again with no allowance for costs. She is being paid £10,000 to use her skills to produce a twenty-minute film that will take more than one year of her life to film and edit. Not to just stand by a lake.”

Speaking to a-n, Firth said: “£10,000 is actually a relatively small budget for a film of this length. Of this funding, approximately half is going towards my living costs for the year in recognition of the sheer level of time it is going to take me. Other project costs include paying for a composer and music rights, post production costs, the purchase of equipment, tapes and transfer, publicity materials and basic production company overheads. I am providing my own camera and editing software worth over £5,000 in total and my production company (Tiny Spark Productions) is part funding the project.” Firth is editing the film herself, a substantial saving in terms of her overheads, but this in itself will require several months full-time work.

Firth was interviewed on Monday’s 6 o’clock news on BBC Radio 4 (approx 28mins into the bulletin) where Scotland Correspondent Colin Blane painted a more balanced picture, giving Firth an opportunity to discuss her ideas and hopes for the project.

Firth posted a message on her Stay the Same project blog on Monday: “This project has been a wonderful opportunity for me to further my work and develop new ideas. [The film will] hopefully one day will be shown in cinemas and I am incredibly grateful for the funding I have received. I hope that the work I do moves and entertains people.”

Sam Firth talks to Andrew Bryant about personal narrative, securing funding and media criticism of Stay the Same Read on