Arts funding and basic income: "This project comes out of the frustration of depending on outside juries" - a-n The Artists Information Company 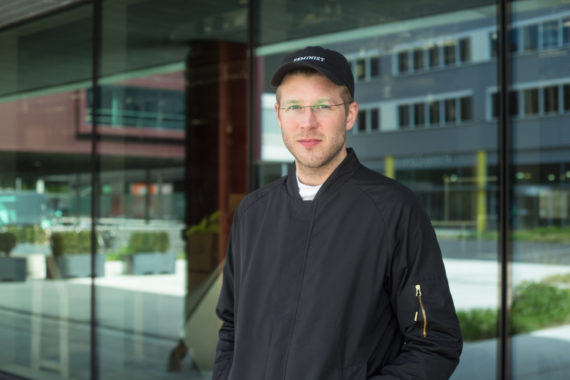 Five photographs slowly rotate on the floor of the exhibition ‘Fellowship of Citizens’. Transparent tubes containing what seem to be numbered lottery balls punch through the images which show characters from the film WILMA (2018), a full-length feature by Hawk Bjorgvinsson of which a short excerpt is playing on repeat at arebyte Gallery.

WILMA and the photographs, by Berglaug Petra Garðarsdóttir, have been created to promote a lottery set up by the special interest group Félag Borgara – ‘Fellowship of Citizens’ in English – founded last year in Iceland by London-based artist Saemundur Thor Helgason.

The group’s purpose is to lobby for a basic income in Iceland that would award each person in the country with a monthly stipend regardless of their job or status. Despite a push for basic income in the Icelandic parliament by the Pirate Party, it is important for Félag Borgara that their concept remains apolitical; an idea for basic income that is run for the people by the people.

A sense of injustice about the way artists are supposed to forge a sustainable career is what propelled Helgason – co-founder of Amsterdam/London art organisation HARD-CORE and Cosmos Carl – to think of different ways to support his art practice after graduating from a masters at Goldsmiths in 2015.

“As a practicing artist and having studied a masters degree for a profession where you don’t really have a income unless you sell your work – which is quite rare – I think it is a good example of a profession that doesn’t fit into the wage-labour formula,” he says. “There are so many practices which don’t really fall into this idea.”

This point of view is articulated in a short wall text in the exhibition by Nick Srnicek, author of Platform Capitalism (2016): “Whether we work in a factory, work in the home, or work to create, we demand to be recognised and a right to existence without the compulsion of wage-labour.”

For Helgason, the well-worn path of applying for funding, prizes and awards felt more like a lottery as opposed to a mechanism that supports artists unconditionally. “In applying for artists’ funding it is very rare that you actually get the funding,” he says. “Artists, at least myself, don’t see much future in a jury with its own tastes. This project comes out of the frustration of depending on outside juries and wanting to find a way to fund an art project that finances itself.” 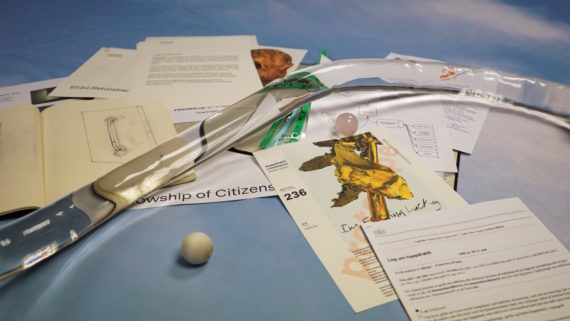 A solution to this is displayed in the corner of arebyte on a poster advertising I’m feeling lucky (2018), a commissioned artwork by Anna Mikkola fabricated from 100 grams of gold. Mikkola’s sculpture is intended to be the first prize in the Happdrætti Listamanna or ‘Artist Lottery’, which will generate income for the group to lobby for basic income, fund commissions and support BIEN (Basic Income Earth Network) which has been promoting basic income internationally since 1986.

Speaking to Helgason on the phone in Amsterdam, where he teaches at the Gerrit Rietveld Academie, I ask him about the challenges of setting up a project like this. He says that what has been most difficult is the bureaucracy, or getting familiar with the “real paper world, which is necessary if you want to have a systemic practice or a practice which performs systematic operations”.

The past two years he has focused on starting Félag Borgara and persuading people to be on the board, as well as the ongoing legal process of setting up the lottery. Originally the prize was a month’s salary, but a straightforward cash reward is not permitted for this type of lottery in Iceland. A lump of gold was seen as quasi-money, so Helgason is hoping that Mikkola’s artwork will pass the legal test as a prize that is a commodity and not cash.

When it is approved, the Happdrætti Listamanna will be open to everyone, not just artists or Icelandic residents (if you can collect the prize, you can participate). In the spirit of Joseph Beuys who famously declared “every man is an artist”, a slogan for the lottery advertising campaign urges people to ‘embrace your inner artist’.

Helgason believes that “it is unfair the way that we differentiate between different types of labour”. With this in mind, it is perhaps most important that artists seeking ways to support their practice also reach out to honour those who use their time outside of conventional wage-labour to, for example, care for others, cook or sing. Srnicek’s wall piece writes about the potential of basic income – and that potential lies in recognising what gives all of our lives value beyond monetary systems.

CORRECTION: This article originally incorrectly stated that the Basic Income Earth Network (BIEN) was founded in 1996; it was in fact founded in 1986.

Laura Davidson is one of eight a-n members selected for the a-n Writer Development Programme 2017-18. For more information on the writer programme, and to read more of the latest cohort’s work, visit the 2017-18 programme’s blog on a-n.co.uk or use the a-n writer development programme 2017-18 tag