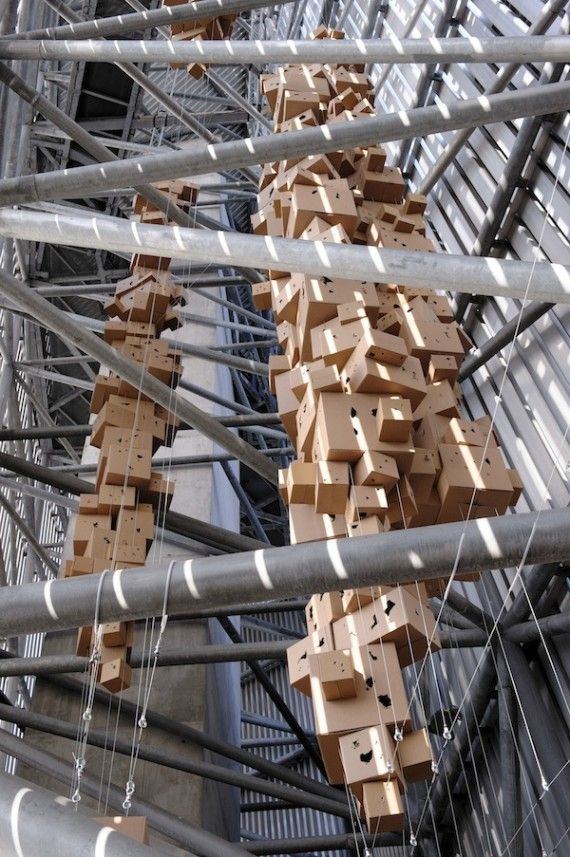 There’s a cardboard city hanging from the metal girders in the tall and cavernous foyer of the Daniel Libeskind-designed Imperial War Museum North (IWM North) in Old Trafford. Made from hundreds of boxes strung together and punctured with holes like gunshot entry wounds, this site of construction/destruction is the work of the Palestinian artist Bashir Makhoul and sets the tone for the theme of the third Asia Triennial Manchester – Conflict and Compassion.

Cardboard, of course, is the building material of the homeless, and Makhoul has worked with it extensively, including for his installation at the Palestinian Pavilion during last year’s Venice Biennale. In Manchester, the setting creates an eerie sense of displacement and uncertainty – of things literally and metaphorically hanging in the balance.

IWM North is hosting nine artists as part of Art Triennial Manchester, their work placed amongst the museum’s military hardware and wall displays. Most powerful of these interventions are a series of intimate paintings by Pakistani artist Imran Qureshi; blood red foot and hand prints which, on close inspection, reveal beautifully-detailed petal-like patterning. It’s a shame they’re positioned in a corridor next to the café, though.

More appropriately displayed in an unconventional space is American artist Aman Mojadidi’s Commodified, a collection of ‘souvenirs’ from the Afghan war arranged in the museum’s reception area, next to the shop. ‘Gifts’ include an orange Guantanamo Bay t-shirt, a child’s plastic bucket and face cloth for playing at waterboarding, and a blingtastic chunky gold chain and hand grenade. Those wanting subtlety please look away.

There’s more art out on the museum car park in the shape of four shipping containers. Conceived as micro-nations, inside are jigsaws of the world, a ghostly, body-shaped knitwear pattern, and a bleak, oppressively noisy film by Chen Chieh-jen, featuring a group of anonymous men pushing at a large and unyielding metal door.

Asia Triennial Manchester’s very broad remit is to feature work by artists who live in, work in or address issues that relate to Asia. It’s a mission statement that covers a vast array of possibilities and perspectives, and consequently isn’t particularly useful if trying to negotiate this city-wide exhibition as some kind of coherent whole. Better, then, to see ATM as a rather incoherent slice of an even bigger and more sprawling reality; a journey through wildly differing works that doesn’t hang together particularly well but which has its moments of interest none the less.

The Harmonius Society exhibition, presented by Manchester’s Centre for Chinese Contemporary Art (formerly the Chinese Arts Centre) is a case in point. Featuring the work of 30 artists from mainland China, Hong Kong and Taiwan and presented across six venues, it sits within ATM but is very much its own thing.

At the artist-led studios and gallery space ArtWork Atelier, Zhou Xiaohu invites you to step inside a red-fur lined installation full of ringing telephones and video screens, presenting reenactments of interrogation and war. It’s intended to be a sensory overload, an emotional barrage – or perhaps it’s a little over-egged and mildly irritating.

Upstairs at the same venue, Zhang Peili’s Elegant Semicircles features six large, single-colour flags on mechanised flagpoles that sweep the floor as they move from side-to-side. With rather less fanfare, on a wall nearby a TV monitor shows Xu Qu’s Upstream – an attempt by two young men to get to the centre of Beijing in a blow-up dingy. Perhaps unsurprisingly in this rapidly expanding and increasingly global city, they don’t get far before they’re carrying the boat on dry land. It’s a raggedly-made video that turns a crazy idea into a real-life adventure.

Harmonius Society exhibits pop up throughout the city: at the Museum of Science and Industry, Manchester Cathedral, the National Football Museum. In a corridor of the beautiful, neo-gothic John Rylands Library on Deansgate, Zhao Yao’s contoured carpets depict aerial views of China’s expanding airports, barometers of the rapid economic growth of the country; library visitors are invited to walk on them. In the Reading Room, Wang Yuyang’s gimmicky but fun Breathing Books gently rise and fall as if the pages are lungs, their silicone covers hand-painted to resemble books from the library’s collection.

At the Centre for Chinese Contemporary Art itself, the celebrated Beijing-based, internationally-exhibited artist Liu Xiaodong presents a series of paintings, Inbetween Israel and Palestine (2013), documenting everyday life and conflict in the region. It’s a great little show by a very big Chinese artist, but it also feels shoehorned into the ‘conflict and compassion’ theme – a Chinese painter’s insight into contemporary China would have been more appropriate.

Rather closer to home, while both conflict and compassion can be found in abundance in Glasgow-based Birmingham artist Hardeep Pandhal’s work, his exhibition at Castlefield Gallery showed no sign of thematic tinkering.

Across film, drawing, street banners and an oversized jumper knitted by his mum – depicting a Sikh saint holding his severed head in one hand and a dagger in the other – Pandhal displays a playful, thoughtful and visually tantalizing approach to exhibition-making that belies the fact that this is his first solo show. From a busy and admittedly whistlestop tour of the triennial, it was a highlight.