At the Edinburgh Fringe, tick-box culture of disabled arts is finally being challenged - a-n The Artists Information Company 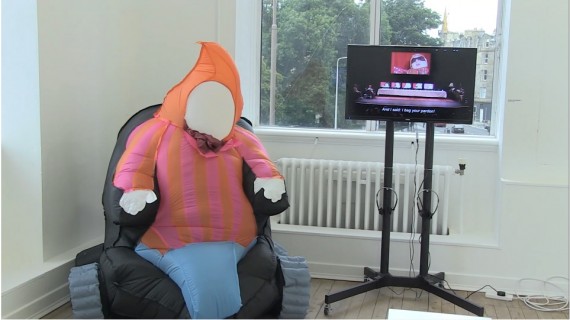 For three weeks each August the city of Edinburgh explodes with life as it showcases the best in the arts via the Edinburgh Festival Fringe. Thousands of performers take hundreds of stages, and audiences have their pick from a cornucopia of shows ranging from comedy in all of its guises to avant-garde dance and spoken word.

But this year there’s something new that has been particularly noticed. Coverage of this year’s programme draws attention to the unprecedented amount of disabled artists and performers at the festival. This includes the inaugural iF Platform (Integrated Fringe Platform), Unlimited exhibition and a showcase from the British Council.

Not that disabled artists haven’t performed at the festival before, but we’ve never seen such dedicated spaces to disabled performances. This bold programming finally begins to challenge the tick-box culture existing within our arts programming and funding, which at its worst, serves only to pay lip service to diversity.

So how did this culture develop? It has often been said, most notably by disabled artist Allan Sutherland, that disability arts would not have been possible without disability politics coming first. In short, understanding that disability is not a product of individual fault but is a socially created phenomenon has provided a vital theorisation that forged the disability arts movement.

Armed with this reinterpretation, what resulted was unease over the prevalence of negative imagery of disabled people in popular culture and the arts. When considered in bulk, it was obvious that mainstream art and culture was not only perpetuating stereotypes, but also didn’t reflect the experiences of disabled people. The social model provided a way to identify barriers in the arts world which has proved useful in beginning conversations about access.

What emerged from this were the politically fuelled art works that are now known as disability arts. Funding bodies, cultural institutions and the government also responded by pushing social inclusion policies and so the ‘tick-box’ context was born.

Earlier this year it was announced that the National Disability Arts Collection and Archive (NDACA) had been awarded nearly £1m from the Heritage Lottery Fund. This is to ensure that the disabled people and their allies who broke social and political barriers to create art about their experiences have their stories told. This project is not just about collecting art, it also has a political agenda, as project director David Hevey pointed out in a recent interview: “We want NDACA to put power and heritage back in the hands of the Disabled Rights Movement.”

But this emphasis on the politics of the movement, although a necessary step, has arguably rendered it open to criticism. Concentrating on political content at the expense of technical competence and the total rejection of what has been seen as the ‘imposition’ of non-disabled criteria has made the movement insular.

Roland Humphrey, former editor of Disability Arts Magazine (DAM), suggested structures that have been handed down from the political movement to the artist have effectively narrowed and restricted the practice: “Disability Arts has to be good art first and foremost otherwise it will be ignored.” While disability art certainly constituted an empowering voice for disabled people, has its disconnection from mainstream art contexts delayed its recognition?

Many believe so. The fact that some arts and cultural programmers are not selecting disabled artists other than in a token context is well debated and brilliantly satirised by the Disabled Avant-Garde (Katherine Araniello and Aaron Williamson) in their 2009 film Damaged Dance. A satire on the body-aesthetics of contemporary dance, it also depicts the dancers in their cushy new arts studio drinking a tequila-sunrise, awarded to them for “ticking all of the disability boxes”.

Taking up this criticism, the iF Platform and other disability arts initiatives appearing at this year’s Fringe appear to embody another new direction for disability arts, one which places emphasis on the quality of the art as opposed to its politics.

The inaugural iF platform is a groundbreaking showcase featuring the UK’s top disabled artists and integrated arts companies (featuring both people with and without disabilities). Curated by Stopgap Dance Company, at Edinburgh it features five very different shows from dance to comedy, which explore diverse topics including albinism and Tourette’s.

I was fortunate to catch one of the iF Platform shows last year when it was programmed as part of DadaFest, a biennial disability and deaf arts festival based in Liverpool. Jess Thom’s Backstage in Biscuit Land gives audiences a rare glimpse into the extraordinary life of a person whose neurology means they say biscuit 16,000 times a day. Thom has Tourette’s Syndrome and uses theatre to share the humour, spontaneity and creativity her condition brings, resulting in deliciously chaotic and totally unique performances.

It is this quality, one of being able to view and inhabit the world differently, which as always attracted me to the work of disabled artists. The bold programming at the Edinburgh Festival Fringe overcomes this tick-box context and instead foregrounds something we’re all invested in: great art which reveals the world differently.

Jade French is PhD Candidate at University of Leeds and a writer at Disability Arts Online.