ATM14: a triennial of conflict and compassion - a-n The Artists Information Company 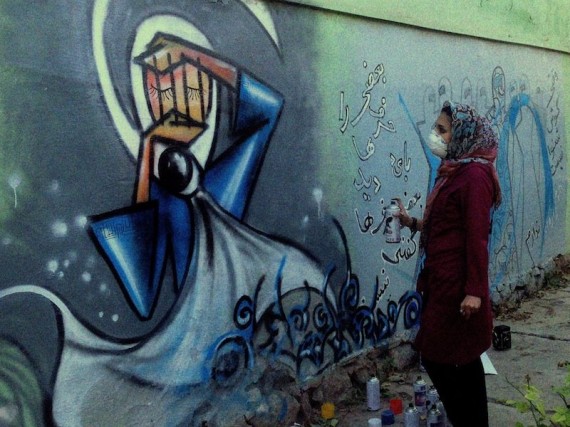 Asia Triennial Manchester 2014 has announced the programme of core exhibitions and commission for its third edition that will take place throughout Manchester from 27 September to 23 November.

Curated by ATM artistic director Alnoor Mitha, the 2014 edition of the festival will explore the political agency of today’s artists and curators, asking whether the role ‘may be, in part, to provide a voice for the unheard, a message to the dominant, or even to demonstrate some kind of sympathetic vision of values through the visual.’

The triennial’s theme, ‘Conflict and Compassion’, brings together a roster of international artists with deep involvement in their respective art communities. Aman Mojadidi has been active in the resurgence of Kabul’s art scene since he moved to Afghanistan in 2003. The American artist of Afghan descent is known for public, site-specific works that subvert interpretations of history.

Bringing the street art of Kabul to Manchester, Shamsia Hassani has been commissioned to transform the exterior space of Imperial War Museum North. Hassani has devised a new form of graffiti art that bypasses the problems of working on the streets of Kabul by using digital imaging to suggest interventions in the city.

Elsewhere, British artist Alinah Azadeh will bring her Book of Debts to Manchester. Azadeh has written extensively on her a-n blog about the development of this touring project, which explores debt and poverty within our society.

Bashir Makhoul will be presenting a new edition of his large-scale installation, Enter Ghost Exist Ghost, previously exhibited as shifting walls of projected photographs that explore the spectral spaces that emerge in sites of conflict. Bashir’s practice is often participatory – for last year’s Venice Biennale he created an ever-growing shanty town of cardboard boxes during his ‘occupied garden’ installation for the Palestine Pavilion.

This year’s festival also sees the staging of the largest exhibition of Chinese art in the UK to date. Curated by Manchester’s Centre for Chinese Contemporary Art (formerly Chinese Arts Centre), the exhibition spans six venues and features the work of over 30 artists from Taiwan, China and Hong Kong.

Asia Triennial Manchester is an initiative of MIRIAD and Manchester School of Art at Manchester Metropolitan University, where Alnoor Mitha is also a research fellow. The festival celebrates and supports the work of artists who live, work in, or address issues relevant to the continent of Asia.