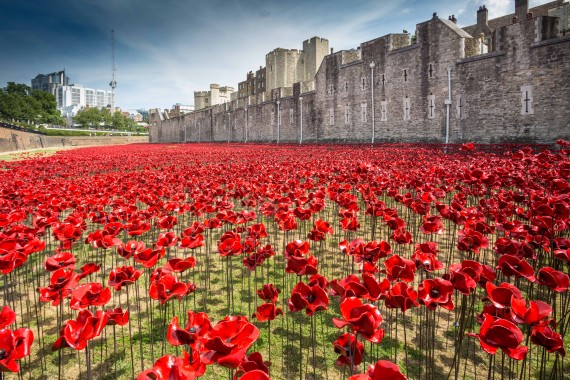 Two sections of the Blood Swept Lands and Seas of Red installation at the Tower of London are to remain on show until the end of November, while thousands of the poppies will tour the UK before being permanently based at the Imperial War Museums in London and Manchester, it has been announced.

Ceramicist Paul Cummins, who devised the installation with the assistance of theatre designer Tom Piper, will plant the final poppy at the Tower of London tomorrow, 11 November, to mark Armistice Day and the completion of the art work.

Each of the 888,246 hand-made ceramic poppies – that represent the British and Commonwealth fatalities of the 1914-18 war and those who died from their wounds in the years following the conflict – has been created either by Cummins himself, his team working at his studio in the East Midlands, or at two further ceramic studios in the UK. Volunteers have been planting the poppies every day since the installation opened on 5 August.

Speaking about the success of the project earlier this month, Cummins said: “I’m astounded at how people have reacted to this installation – and how it has become more of a community project than anything else. People want to be a part of this – make sure they make their own mark, plant their own poppy – and to inspire people in this way, that makes me feel truly proud.”

While the installation was due to close following the Armistice Day service, with individual poppies being packaged and sent to those who have paid £25 for them to raise money for six charities supporting service personnel, veterans and their families, huge demand from the public sparked a campaign to keep the installation in place longer. It is believed that around four million people have visited the installation since it opened.

The UK tour, of which full details are still to be announced, will be organised by 14-18 NOW, the cultural programme taking place across the United Kingdom to mark the centenary of the first world war. The tour is being supported by donations from two charities, the Backstage Trust and the Clore Duffield Foundation, together with more than £500,000 of government funding. This government funding – provided from fines accrued from the Libor banking scandal – will cover the cost of storing, transporting and installing the poppy sculptures in towns and cities across the UK.

Vikki Heywood, 14-18 NOW Chairman, said: “14-18 NOW is delighted that we can extend the life of this beautiful art work and ensure that key elements are enjoyed throughout the UK. We can now look forward to an exciting next chapter in the story of the poppies.”

Culture Secretary Sajid Javid added: “The poppies at the Tower are a stunning memorial to those who died in the first world war. For me this is public art at its most powerful and moving.”

Tower of London installation: participation is key to aesthetic impact – Pippa Koszerek reports on the opening of Blood Swept Lands and Seas of Red