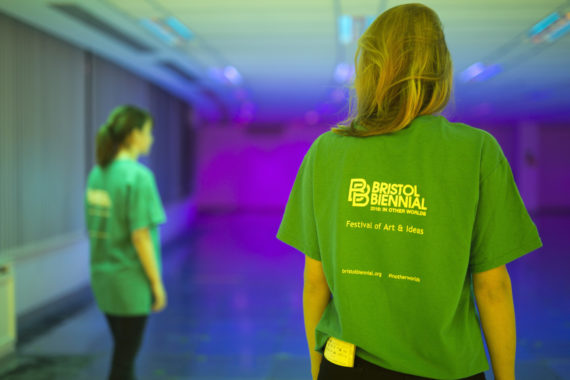 It’s raining, and in Bristol’s St Nicholas Market people have sprinted inside the Georgian portico to shelter. Two tracksuited women greet them. Alongside, there’s a plastic patio table fixed at breakfast-bar height with integral parasol where people stand to write. Someone records voices with a fluffy microphone.

This is DIY City, part of Bristol Biennial, a ‘festival of art and ideas’ which for its third edition is subtitled ‘In Other Worlds’. For this festival commission, artists Marieke Warmelink and Jasmin Moeller facilitate a cooperative platform for Bristol residents to share feelings on their quality of life. The artists use consultancy and therapy models to capture problems and solutions from residents before presenting their findings at festival close.

As a non-resident of Bristol, my experience of DIY City was limited to passive observation, and similar access restrictions occur across other programmed events. While this anomaly is frustrating, at the same time there’s a sense of the Biennial successfully meeting its aim of greater understanding the city and its voices through steadfast focus on its residents. 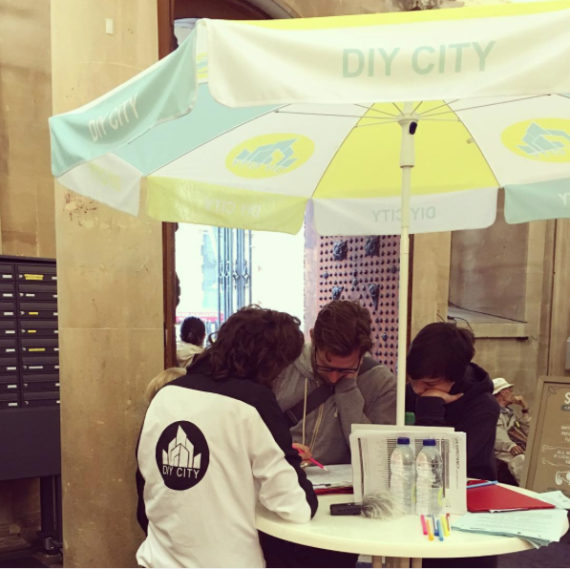 For her project, Better Than I Imagined, Claudia Capocci has collaborated exclusively with festival volunteers in order to explore the nature of voluntary labour. Through an impromptu conversation, music student and festival guide Emily tells me about her experience of Capocci’s workshop, which explored the politics of unpaid work through making sew-on patches. Emily’s patch is appliqued with her own critical message, ‘Keep Adapting’. Along with other festival volunteers, she wears her patch in an act of covert, ‘quiet rebellion’.

Fixed solidly within this festival that shifts back and forth between art and ideas is Our Colour by Liz West. The Manchester artist’s installation transforms an empty, open plan office suite into an immersive colour spectrum through interventions with reflective materials. Entered via a bland reception area, a lift travels to the top-floor office space. A steady flow of people linger; sitting, whispering together, criss-crossing the colour drenched space – occasionally the click-clack sound of heels cuts dramatically across the office. 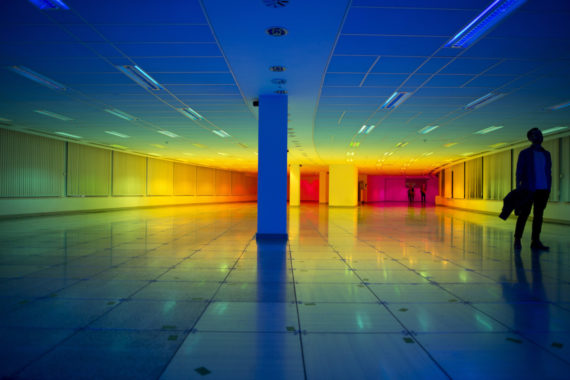 At Bristol Temple Meads railway station, passengers passing back and forth through the side entrance’s green sliding door are greeted by happy flurries of noisy voices. Natalia Skobeeva’s sound intervention, Hey Bristol, stops inquisitive people in their tracks. Puzzled heads turn, attempting quick identification of the joyful voices transmitting at the terminus threshold.

Behind the railway station alongside Platform 13, people assemble outdoors for a long-table discussion convened by SORT (Sorting Office Revising Team). Taking place at Bristol Wood Recycling Project in the shadow of the derelict former Bristol Sorting Office – abandoned in 1993 and bought by Bristol city council in 2015 – the subject for conversation is a community-led future for the site.

A group of mostly architects, academics and artists assemble in the woodyard’s container-pot vegetable garden, sheltered from the rain around a canopied table. Coffee is shared and sensitive conversation is pierced by fuzzy tannoy messages emitting from the railway station.

With no formal agenda, ideas for the site’s future are invited. It comes as little surprise that the city council’s vision here is steered commercially within a familiar, dominant economic model. This city-wide debate encapsulates characteristics of wider issues of inequality in the current political climate; ideas travelling beyond the Biennial’s focus on Bristol and its residents. 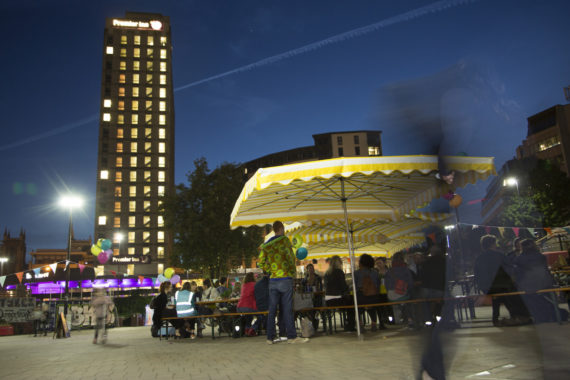 Two festivals collide. In an act of relegation, the civic space of Millenium Square is impassable due to the weekend arrival of Bristol OktoberFest. The Bristol Experimental & Expanded Film programme on the Big Screen is compromised by a huge tent, outdoor beer-drinking arena and wire fencing. Booming from OctoberFest are the sounds of Abba, Charles & Eddie, Chaka Khan, Robbie Williams and oompah bands. This overbearing, yet strangely timely medley provides the incidental soundtrack to the screening of gorgeous photogram collages, sound cut-ups, performative PAL soundcards, found footage and photochemical experiments.

This marginalization of the BEEF’s artists’ moving image programme awkwardly emphasizes the other worldliness and different motivations the Biennial seeks to explore. Through the festival’s focus on Bristol and its residents, it’s possible to build greater understanding of the city from an external perspective – inevitably mooting questions of one’s own civic services.

Bristol Biennial 2016: In Other Worlds, continues until 10 September 2016 in locations across the city. bristolbiennial.org

Visit www.instagram.com/anartistsinfo for Maddy Hearn’s images from the Biennial