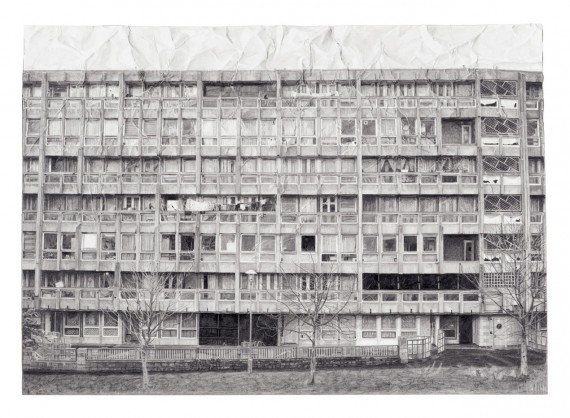 “My key intention is to just be human about it. I don’t think, ‘Right, I’m an artist coming in and that means I’m going to behave in a certain way’.”

Jessie Brennan’s new book, REGENERATION!, is typical of the way she approaches her socially-engaged practice. While the brutalist architecture of Alison and Peter Smithson’s Robin Hood Gardens in Poplar, London forms the visual and ideological pivot point to the project, what makes the work so engaging is the way it gives a voice to the residents of this soon to be demolished council estate.

“It starts with conversations,” says Brennan, “and I see what I do more and more as a quietly radical practice. It’s not about creating a huge noise, it’s just getting under the skin of a place through the people, and through that exposing the politics of regeneration and inevitably asking, ‘Who’s it for?’”

Of course, just as a term like ‘regeneration’ can mask a multitude of complex issues and competing ideologies, conversations with total strangers can be anything but straightforward – as Brennan found out when she began the project in 2014.

Commissioned by HS Projects and in part stemming from an earlier work referencing the estate – the graphite on paper series A Fall of Ordinariness and Light (2014), created for the Foundling Museum’s Progress exhibition – Brennan’s first attempt to involve the people who live in Robin Hood Gardens was a spectacular failure.

“I did a project launch in the local community centre and invited all the residents – but none of them came,” she explains. “So I had to reevaluate exactly who the project was for and think of a different strategy. It was the best thing that could have happened, really – it totally changed my approach.”

Brennan’s inspired response to this setback involved her literally getting down on her hands and knees – not to plead with residents to take part, but to create rubbings of the many doormats along the numerous ‘streets in the sky’ of the estate’s two blocks.

“The doormat rubbings were the starting point for the conversations,” she recalls. “It was pretty cold when I was doing this work and I’d knock on the door and say, ‘Hey, I really like your doormat, I don’t suppose I could make a rubbing of it?’ I’d be wrapped up in a coat and they’d say, ‘Why the hell do you want to make a rubbing? And what is a rubbing, anyway?’ It was just this quite bonkers thing.”

Images of the graphite on paper works she produced (above) feature in the book, along with photos of the estate by former tenant Abdul Kalam and Brennan herself, and archive images from the 1970s. (Designed in the 1960s, Robin Hood Gardens was completed in 1972.)

Also included are a series of interviews with current and former tenants that Brennan got to know through doing the rubbings, as well as Robin Hood Gardens’ caretaker, Wayne Alison.

The 78-page book is a beautifully simple artefact that tells a compelling tale. With essays by Richard Martin and champion of ‘militant modernism’ Owen Hatherley, it also charts how the estate’s fortunes have been tied up with a shifting political landscape that has seen social housing demonised, and the idea and physical manifestation of the welfare state eroded.

“Brutalism seems to be something my generation – thirty somethings – are really interested in; it’s something our parents can tell us about, that post-war consensus and the forming of the welfare state.

“Robin Hood Gardens symbolises this thaw of social ideas that happened at that particular time. The estate is like this imposter – it’s squatting on a neoliberal landscape. You’ve got Canary Wharf behind, and it’s almost too close to it and the ongoing march of development. It just seems to me that it can no longer be allowed to exist.”

Brennan’s book is timely. Plans by Tower Hamlets council for the demolition of Robin Hood Gardens are well under way, and the first phase of the replacement scheme by Swan Housing Group – part of the £500m Blackwall Reach Regeneration Project – was launched in September. Despite a campaign by the 20th Century Society and numerous high-profile architects, a last ditch attempt to get the two blocks listed was rejected.

Brennan is unsure about the merits of listing the estate – “If it were listed and turned into luxury flats that would be a terrible mutilation of its original purpose” – but she is angry about the level of social housing – about 35% – that will be returned to the site once it is redeveloped.

As for her own role in the recent history of Robin Hood Gardens, Brennan is determined to resist the narrative of artists as some kind of social ‘fixer’ or healing force. “I’m really uncomfortable with that idea,” she says. “It’s often assumed [when an artist is working in a participatory way] that you are going to go in and somehow make things better, but that’s a really arrogant way to think.”

REGENERATION!, then, is an unassuming intervention that documents the tail-end of the short life of Robin Hood Gardens’ and its transition from icon of a brave new world to relic of a recent past.

“One of the things I like about it being in the form of a book is that it has an intimacy; it can be distributed back to the residents who are integral to the work. As I’ve always jokingly said of the project: ‘It was never going to be a permanent sculpture!’”