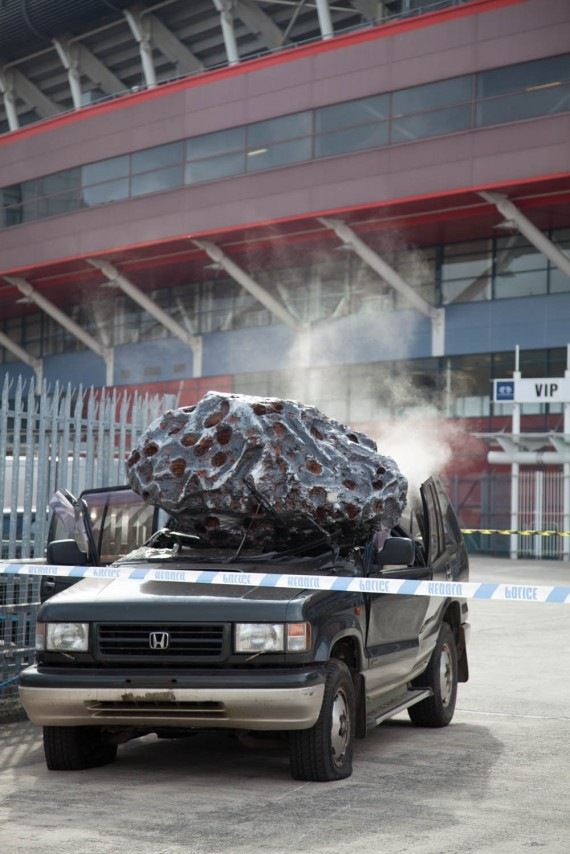 Cardiff Contemporary began in celebratory fashion with the opening of Carwyn Evans UDO exhibition at g39. Evans’ sculptural work is an overlaying of two contrasting cultures – agriculture and haute couture – representing a shift from the necessary to the commodity. Marking the move from a rural to an urban way of life, it creates an interesting entry point to the Reveal/Conceal theme of a festival that is ingrained within the city.

The programme reveals new parts of the city as it invites visitors to explore and discover. Sam Perry’s The Told and Untold Tour, four weekly artist-led tours throughout the festival, began on Saturday with Sam Aldridge’s A Concise-ish History of Cardiff. A group of travellers packed onto a site-seeing bus and were led on a mystery tour through the city, exploring its history from Barbara Hepworth sculptures to famous Cardiff residents now resting in Cathays Cemetery (“The place to be if you’re Victorian”). Unknown histories of the city were revealed and the view of Cardiff was expanded.

The festival utilises lesser-known spaces and invites audiences to experience the city in new ways. Matt Cook’s Sculpture Trail sets new public sculptures alongside the Docks Feeder Canal – as you walk along the waterway, you notice the environment more intently, searching the undergrowth for potential artworks.

Cardiff Contemporary has opened up empty shop spaces in order to collaborate with other organisations such as artists’ moving image festival Outcasting: Fourth Wall. The Outcasting Space holds a curated selection exploring artists’ film as well as work featuring retro arcade games from David Blandy. As the festival continues, more spaces will open up, inviting organisations to utilise these forgotten shop fronts.

Situated in one of these shops is The ‘Stute, based on the Miners Institutes that used to be part of most South Wales mining communities; it acts as a library, a gallery and social space throughout the period of the festival. The library was the focal point of these institutes and this feature is represented with a selection of reading material from The Public Zine Library, Good Press, X Marks The Bökship, the Warp library, and The South Wales Miners’ Library.

This notion of the library space is continued in the Mission Gallery offsite project CIVIC, presented at the Cardiff Story Museum. CIVIC asks visitors to participate in a discussion about the city space; a reading room is set up inviting people to join in the conversation. But it will also venture out into the city during the festival through a series of walks and performative actions. The Swansea-based artists’ collective AE101 hosted a Phone Box Disco in the city centre, utilising a space that is largely unused since the emergence of the mobile phone. The phone box becomes somewhere to reconnect as it is repurposed for social interaction.

A series of installations provide new encounters with the city, both geographically and historically. Near the Millennium Stadium there’s a car billowing smoke; it appears to have been hit by a meteor. On closer inspection, we see that the smoke is coming from a machine – through the revelation of its construction it becomes apparent it’s an artwork by Andrew Cooper, ‘You wait for one, then three come all at once’.

Musician R. Seiliog and artist Richard James have collaborated to produce Sonic Clock Tower, part of In Place of Fear. Field recordings from the city distort and mix with speeches by Aneurin Bevan to create a sonic intervention played from the Cardiff Castle clock tower every day from 5pm. The sound merges the past with the present as time is folded and re-presented back into the city.

Further along the Castle battlements, Locws International have commissioned Dominic from Luton to create Call Mum, a message he has written on his left hand every day, a personal ritual made public. A flag flies from the castle, reminding citizens of Cardiff of this simple yet universal statement of love and respect.

Erwin Wurm’s One Minute Sculptures offer a moment of stillness next to the busy Cardiff train station. The photographs document durational sculptures that use the human body and everyday objects. These humorous and irreverent images question the performance of everyday life as people move about the city from one place to the next.

The festival connects with the city’s history through commissions by artists such as Alex Rich and Johanna Hartwig, as well as residencies from Ian Watson, Simon Fenoulhet and Daniele Sambo, who will explore the forgotten spaces, places and stories of Cardiff.

Hartwig’s Watermark outside the central library marks the position of the Glamorgan canal system, which runs silently underneath the city centre pavements. Using pressurised water, this system is made visible, but through the duration of the festival it will fade back into a memory.

Sitting in the centre of Cardiff is a shipping container featuring an image of a Spillers Biscuit. Alex Rich’s Reflections Towards a Well Tempered Environment makes reference to the biscuit company that used to operate in Cardiff; the work nods towards Cardiff’s maritime history and spreads across the city, from the town centre to Cardiff Bay.

It is through these unexpected encounters that the festival succeeds, whether it’s a reminder to call mum, chancing upon a meteor strike or an unexpected sonic intervention. These events make us re-evaluate the city and create new relationships to places.

As the festival progresses, the engagement and exploration of Cardiff will continue; new possibilities will open up and form a richer context for the city and its inhabitants. Spreading throughout Cardiff, from known spaces to newly discovered ones, Cardiff Contemporary offers new ways to experience the space, engaging it in an artistic discourse.

Cardiff Contemporary continues across the city until 9 November 2014. www.cardiffcontemporary.co.uk

Rory Duckhouse is an artist and writer based in Cardiff, Wales. roryduckhouse.wordpress.com Â