Cardiff Without Culture? march: "Art is not an add on, it's intrinsic to who we are" - a-n The Artists Information Company 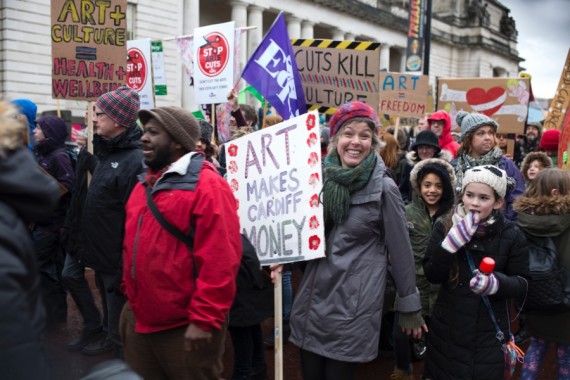 Hundreds of protesters marched through Cardiff on Saturday to protest against proposed funding cuts of £700,000 to the council’s arts and culture budget. Organisers estimated the turn out to be between 600-800.

Starting outside Cardiff Museum, the Cardiff Without Culture? march was led by a musical, New Orleans-style mock funeral procession with pallbearers carrying a coffin adorned with flowers spelling out ‘Art’.

Protesters carried placards, many of which had been made at special workshops hosted by the artist-run g39 gallery. Slogans included: ‘Cut the crap, not our culture’; ‘Art is necessary for a democratic society’; and ‘Cardiff: Don’t be an arts-hole!’. (You can view a video of the march on artplayer.tv.) 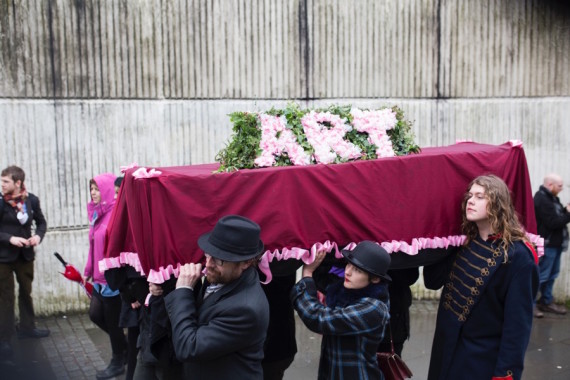 Cardiff-based artist Rabab Ghazoul, one of the organisers of the protest, gave an impassioned speech outside the museum.

“Our march today is historic, because it’s the first march ever to take place in Cardiff dedicated to safeguarding one of the city’s most precious assets – its culture,” she said.

“Culture and art is not an add on. It’s not here to accessorize the city. It’s not an extra when we can afford it. It’s intrinsic to who we are, how we express ourselves, challenge each other, connect and create community. 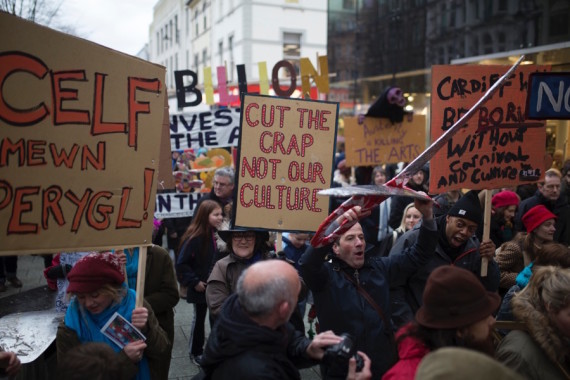 Commenting after the march, Laura Drane from Cardiff Without Culture? said the event had been “amazing – our own expectations were smashed”.

Responding to the march, a statement from Cardiff Council said it was still considering feedback from its public consultation and stakeholders on its budget proposals. “Any changes to the proposals will be made public on Friday, 12 February, before going to cabinet the following week and to full council at the end of the month.”

The march was part of the ongoing Cardiff Without Culture? campaign which is fighting the proposed cuts.

The city’s arts community is working together to urge the council to rethink its proposals, which will see large budget reductions to many of the city’s arts organisations, including Artes Mundi and the Cardiff Contemporary art festival.

As part of the campaign, g39 has commissioned a series of Cardiff Without Culture posters (posters by Richard Higlett and Kelly Best below), with one new design posted online each day up until the council makes its budget decision on 25 February.

So far seven posters, published as free digital art works, have been featured on a newly created Cardiff Without Culture? blog.

Cardiff Without Culture? campaign calls for action to halt cuts