Christina Mackie: "I like to run close to chance and indecision" - a-n The Artists Information Company 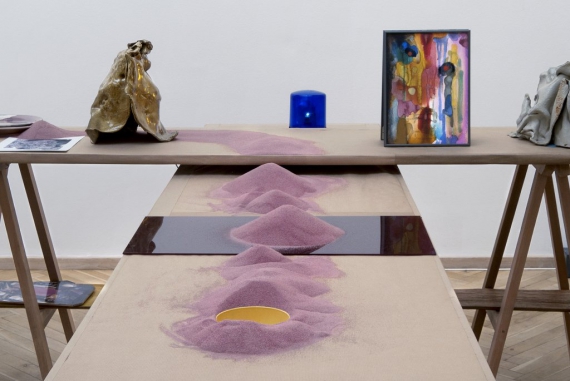 They might have their origins in a North Australian storm, but the strangely atmospheric photographs of volcanic rock formations that are at the core of Christina Mackie’s The Judges III, belong very much to their new home in Nottingham. “What’s going on in this work is kind of situated in Australia, with the sand, the rock, the glazes and imagery,” she explains, “but it’s not really about Australia in any way. It’s very closely connected to this location, the Castle Museum on its sandstone cliff, with the cave networks underneath, its collections of studio ceramics and roof tiles, even the way the piece sits in the Long Gallery space here.”

Mackie’s third version of The Judges owes its existence to the Contemporary Art Society’s £60,000 Commission to Collect annual award, which was won by Nottingham Castle Museum & Art Gallery in November 2011. Deborah Dean, the museum’s Visual Arts & Exhibitions Manager, decided to apply with Mackie as her chosen artist after seeing her work in the 2006 British Art Show. “We wrote the application together, but Deborah did most of the work,” says Mackie. “We were totally shocked when we got it, because it was really a case of, well, let’s just try it – and now Nottingham has ended up with this massive work of mine to look after, which is amazing.”

Perhaps ironically, the strained business of making applications was one of the new work’s inspirations; Mackie’s observation of anthropomorphic faces in the Australian rock formations was partly, she thinks, triggered by stress: “I began making these things as a test. The photographs I took were very eerie, and every single one of these rocks seemed to have a face. But how did this happen? Obviously, there is nothing there – they’re just rocks. But I wanted to see whether this was a human thing of seeing faces in places where there are only rocks, or whether I was under stress and that was why I saw faces everywhere? I’d been involved in a lot of competitions and been nominated for things, and that sense of being judged was at the core of the strain I felt under.”

Searching for the perfect balance

More broadly, the implied judgement of these “thirty or fifty million year old” basalt rocks related to Mackie’s thinking about climate change, suggesting that the forbidding faces were somehow standing in judgement over humanity’s own effect on the Earth. “In saying that, I’m talking about putting the work together,” she notes, “not explaining what the work means. That’s part of the pleasure of installing and making the work visible in a particular location. By trying to get – and I mean ‘trying’ not succeeding – a perfect balance in the room, people might see the work and the room better; sense that balance, enter into it. You never really get there but that’s always the aim.”

A “much looser” version of The Judges was first shown in 2010 in Oxford, which Mackie describes as being made of “bits and pieces” including drawings and elements consisting of raw clay. “This new version had to be much more formal and complete because it’s for the permanent collection,” says Mackie. “It’s important to me that these works come together only for a moment. It’s not a bronze horse or something, it’s brought together and then it all goes away again until the next time it’s shown. I’ve also thought a lot about how the piece relates to its space and the collections here, so the individual elements are the work, but when the whole thing is arranged, that’s the work too. I like to run close to chance and indecision, and keep the work on edge with that.”

Described by Deborah Dean as a “thought process made visible”, Mackie’s work can forge seamless alliances between methods sometimes thought to be mutually exclusive. Her ceramic objects and vivid abstract paintings, made using natural dyes and glazes that refer to Haida and North West Coast Indian art, imply an interest in craft and folklore, even as her digital pieces play with ideas of virtual reality and physical presence, all within a highly conceptual frame.

“I grew up in Canada and there wasn’t a huge wealth of European art in the town I lived in, maybe just a handful of paintings in gold frames, so I think that gave me a very strong interest in non-European art and non-European ways of working,” she explains. “But my teachers were conceptual artists in Vancouver and when I came to the UK in 1975, I’d already studied Land Art. I don’t feel I ever got near to what seemed possible with Land Art, but it was a big influence and survives in the way I try to align each work with its location, I think.”

This is why the alignments within The Judges III seem so important, as Mackie draws material from the Castle’s collections, its geological location and its long history as a public art gallery, into the field of the work. “The kind of collection put together in the Victorian era was usually about making a statement that we could know everything,” she says, “but this piece is a meditation on the objects themselves. I’m not interested in showing what I know because I don’t believe in that kind of knowing.

“When I was on a residency in Pakistan, there was a Taiwanese artist who performed a ritual when he was firing clay, and when he didn’t have the herbs he’d put a cigarette in front of the kiln. I have what you might call a ritual of waiting until I feel calm enough, or still enough, to make the gesture the work demands.”

The Judges III is on show at Nottingham Castle Museum & Art Gallery until 27 April 2013.

The Contemporary Art Society is currently calling for submissions to its Annual Award for Museums – Commission to Collect 2013. Deadline for submissions is Friday 21 June 2013 at 5pm. For full details on applying see www.contemporaryartsociety.org.