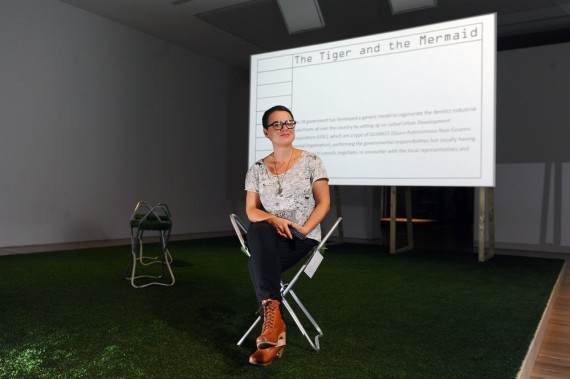 Art prizes can be problematic. They can too often create a temporary platform to focus on well-established names, shipping international artists into ‘local’ art scenes without any real sense of exchange or interaction with the resident communities.

It’s a criticism that has been levelled at the Artes Mundi exhibition in previous years. Now on its fifth edition, the first under new director Ben Borthwick, it’s clear from recent symposium, Social Contours: Art at the Borders, that the prize’s organisers have started to address these issues. Rather than a linear art competition, Artes Mundi – which this year was won by Mexican artist Teresa Margolles – is also an organic series of events, talks and performances, bringing in Welsh artists, writers and musicians to offer an alternative context to the nominated artists’ works and to put a spotlight on local talent.

The themes of the Artes Mundi 5 exhibition include ‘identity and citizenship’, ‘globalisation’ and ‘community participation and socially engaged art’. The symposium offered a platform for all of the seven nominated artists to open up their practices and ground their works clearly and explicitly within these themes.

Through a mixture of keynote presentations by academics and panel discussions between the exhibition’s selectors and artists, we were given a transparent account of how the prize was devised, curated and, perhaps most importantly, how we as visitors could make links between the selected artworks and follow a shared route of exploration and approach in all of the artists’ practices.

In the welcome address, Borthwick, curator of the Artes Mundi 5 exhibition, offered his take on the themes of the symposium and the nature of the prize itself. “Borders are not dividing lines but points of connection, places where discussion and dialogue starts,” he said. Borthwick argued that Artes Mundi 5 was an art prize without a fixed framework – the selected artists had been commissioned to respond to Wales, to the National Museum which hosts the exhibiton, or simply to make new work.

The prize’s relationship with Wales was highlighted by the keynote presentation given by Professor Dai Smith, Raymond Williams Chair of Cultural History at Swansea University. During his informative and relaxed presentation, Smith excavated a hidden history of Wales; not the history of a principalility whose identity exists purely in relation to England, but a country which was “the last explosion of the Industrial Revolution”.

Smith made explict the need for Wales to reinvent itself, to create an identity and form national institutions such as the National Museum (founded 1907) in the face of large-scale migration between 1900-1912. He argued convincingly that Wales was a perfect place in which to have discussions on identity, immigration, physical and pyschological borders and the avante-garde.

In the panel discussion between Borthwick and nominated artists Phil Collins and Apolonija Šušteršič, issues of working within specific communities and locations were at the forefront. Šušteršič, an architect and artist, discussed her work, ‘Politics “In Space”/Tiger Bay Project’, a multi-faceted installation and video piece which directly engaged with local government and communities in Tiger Bay to discuss the controversial construction of the Cardiff Bay Barrage.

Šušteršič’s video consists of interviews from both the pro and anti-barrage camps, and although it is clear from the edit which position she takes, it was fascinating to hear her talk about her use of the National Museum as a platform to instigate and debate public/local issues. Behind Šušteršič’s practice is a genuine interest in “coming to a place as an outsider, exploring and learning from a place” and “enjoying meeting people in the local context”.

The themes of public, private, local and international boundaries were echoed in Phil Collins’ talk about his practice and his selected works for the exhibition. Collins’ presentation was the highpoint of the day – he was theoretically articulate about his practice as well as engaging and funny as he discussed his interest in popular culture and making art works “that your granny would understand”.

Like Šušteršič, Collins has worked across a diverse range of communities. In his slideshow work, ‘free fotolab’, he has selected personal, domestic 35mm images from around Europe and created a nine-minute show which asks the viewer to question the reason behind the shot and their role in its reading.

Collins was open about the motivations behind his practice – a desire to create an alternative mode of address, an opportunity to have a voice and share the voice of the participants in his artworks. When questioned about the links between documentary and his own practice, Collins stated his mistrust of traditional documentary and its air of gravitas, describing it as a medium that can “seek to repress”. Instead, Collins argued for the ability and right of the artist to not respect conventions and to propose a self-reflexivity.

Teresa Margolles spoke of her installation work ’32 Years: the Lifting and Removal Where the Murdered Body of the Artist Luis Miguel Suro Fell’ – a section of floor where her close friend was murdered. Margolles explained that the work was “silent” in her house and needed to be part of the show to become “a reality”.

The boundaries between life and death, the physical and intangible, are beautifully investigated in Margolles’ work ‘Plancha’, in which water used to wash bodies in a morgue is slowly dripped onto hot plates, causing the fluid to hiss and evaporate. When asked by Cardiff-based artist Sara Annwyl if her work had any spiritual or religious connotations, she replied emphatically: “I’ve spent a long time in the morgue and I’ve never seen the soul.”

It was this opportunity to hear the selected artists talk about their practices and for them to draw their own shared boundaries around their work, the prize and their relationships with the selectors, that made the symposium genuinely insightful and open. With an audience full of local students, it was great to see such engaged discussion with the future emerging artists of Wales.

I am primarily a lens based artist based in Somerset. I am also co-founder and curator of site-specific arts organisation Second Site - recent projects include 'Mobile: Cardiff Constellation', an exhibition of newly commissioned video works showing as part of the arts festival 'May You Live In Interesting Times' in conjunction with Chapter Arts Centre.