The recent Craft and Social Change conference, organised by Norwegian Crafts at Toynbee Hall in Whitechapel, London, had a broad and ambitious scope, looking at how craft can affect a ‘soft revolution’ within societies. As well as talking about social campaigning against poverty and injustice, it discussed the current turning away from top-down structures and processes towards a DIY culture and a more generous and dignified economics. It also spoke to me as an artist-maker struggling to re-engage with the making process.

In a vast digital market place that appears to operate mainly by driving the price of everything towards zero, making a living from one’s craft is difficult, but not only financially. Ironically, the proliferation of platforms on the Internet can make you feel even more isolated, and arts and craft products less visible.

Artists have, of course, always struggled with the market and more often than not have to do other jobs to make ends meet. Recently, for example, I found myself working for an NGO campaigning for social justice and was struck by how fast-paced the campaigning environment can be. The emphasis on ‘action’, while invigorating, can also be exhausting, with everyone busy planning campaign strategies, eager to get out and target their local MPs.

It was interesting therefore to hear Sarah Corbett talk about her Craftivist Collective and how she wants to slow things down and take a more restful approach. Its main focus is using craft activities to engage marginalised communities, raising awareness around social issues through a process of gentle, non-threatening, soft guerrilla campaigning.

Craftivism is about encouraging social engagement without having to be in constant fight mode. Its protest stitch-ins are small interventions that do not strong-arm, but quietly remind people about social injustices, leaving it to the individual to join in if they want to. No-one should be in any doubt about the power of such an approach, however. Currently, a giant jigsaw patchwork quilt with 700 messages (and counting) sewn into it, in support of Save the Children’s Race Against Hunger campaign, is touring the country. The aim is to put hunger at the top of the G8 agenda – the quilt will be displayed at Hyde Park on Saturday 8 June when 100,000 people are expected to rally in support of its message. In fact the Craftivist movement now has a large international reach to places as far away as LA, Vancouver and Melbourne.

Using craft as an activism tool has a long history. Ghandi and his spinning wheel is an iconic image, as is the Suffragette Handkerchief. Using craft to focus and collect people’s labour to produce better and more sustainable ways to live and behave also goes way back. The late 19th and early 20th century abounds with collective communes attempting to realise the utopian dream. Adam Sutherland, Director of Grizedale Arts, was at the conference and talked about the modern-day community living project at Coniston in the Lake District, a project based on Ruskin’s Arts and Crafts model developed when he lived there in 1852. Again, hand-crafted work is the driver in arts and education, bringing a working community together.

Tracey Emin famously uses embroidery to record the important instances, memories and names that make up her life. In her case, however, craft is used to express an old fashioned individualist aesthetic, while still managing to traverse the feminine subject/victim line in an empowering way. Her work references craft as a powerful critical tool in the feminist movement of the 1970s, where it was used to critique the patriarchal knowledge systems that frame the ‘feminine’ experience.

Janis Jefferies, a leading academic in the language and politics of textiles and digital arts technologies, argued at the conference that a lot of work still needs to be done in reconfiguring our knowledge and value systems, particularly in relation to the boundaries between the home, the individual and the global platforms that are a product of the digital age. This is something Craftivism will have to contend with now that it is having such a broad reach. As well as its 50 or so stitch-ins, it is drawing audiences with different agendas through projects with large corporations such as the Tate and Instagram, and print media magazines like Company and Rewind.

It is a ‘slow’ dialogic practice that appears to be underpinning the turn towards craft and DIY as an alternative strategy of thinking and living. Again, this ‘slow’ logic draws on history: the Slow Food and splinter movements of the 1980s. It’s an approach that is rejected as outmoded and misleading by Helen Carnac, curator of projects such as the touring exhibition Taking Time: Craft and the Slow Revolution (2009) and the online exhibition Making, Unmaking, Repair and Repetition (2010). She prefers a more reflective method, one where knowledge and experiences are acknowledged as moving backwards and forwards in a continuous, open-ended dialogue that is embodied in materials, histories and processes – so that communities can connect rather than struggle within traditionally singular, solitary practices. This connection becomes a fire-line through which craft can mobilise everyone in lots of different modes of operating.

Sarah Corbett’s personal transformation from ‘Lonely Craftivist’ to founding the international Craftivist Collective seems to embody that very idea. It is not just about connecting laterally, but in a deeper, more meaningful way, through small, simple, achievable steps that anyone can do. The intimacy of the sewing circle has somehow grown into a lobbying bridge: from small conversational pieces towards effective public engagement with the power to mobilize global audiences. Not bad going for an introvert. 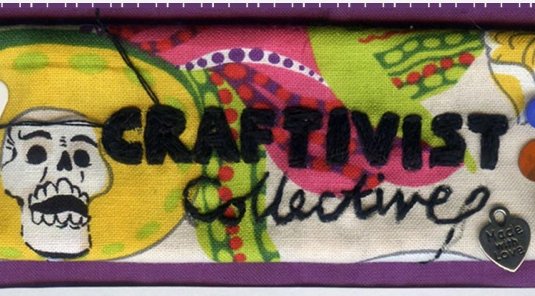