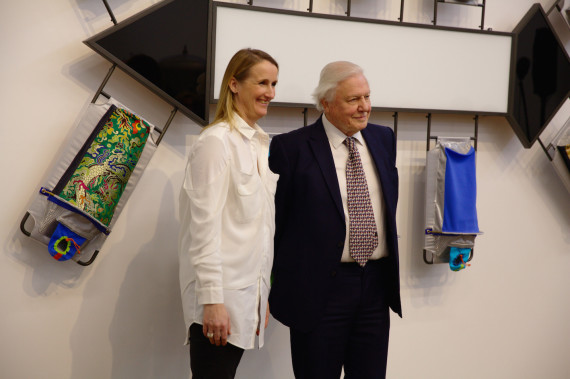 It was an emotional return for David Attenborough to the city, and to the university, of his boyhood. Opening the new £1.5 million wing of Leicester University’s Attenborough Arts Centre – named after the centre’s founding patron, the television naturalist’s late brother Richard – he explained that his family has close ties to the university.

His father was the principal of the university in the 1930s, at that time a university college, while his actor-director brother was very much a hands-on patron of its campus arts centre, which he helped found in 1997. Richard’s son, theatre director Michael, has been the centre’s patron since his father’s death in 2014.

“Humanity speaks through different voices and that is one of the beauties of being human,” he said. “Science provides one language in which you can investigate things, which perhaps doesn’t make an immediate appeal to the emotions, but the arts does it the other way round; it makes a direct appeal to the emotions, as the exhibits I’ve just been looking at do.”

The exhibits Attenborough was referring to is a display of works spanning two decades by Lucy and Jorge Orta, whose collaborative work responds to pressing ecological issues such as climate change, mass migration, the availability of food and water, habitat loss, and the destruction of species. Their social sculptures and assemblages are the result of intensive research in far-flung landscapes and often inhospitable climates, from the Antarctic to the Amazon.

In one long gallery we find an array of strange environmental suits, complete with metallic-coloured gloves, stitched into metal-framed stretchers. It could be the film set for a futuristic military hospital unit after some catastrophic environmental disaster. Elsewhere, hanging from walls, there are similar suits and stretchers for infants, though this time made from beautifully embroidered fabric, perhaps the patterns resembling those found among still-extant peoples living in the Amazon forest.

It may also be nod to Lucy Orta’s former life and training as a fashion designer. She describes the work as utopian rather than apocalyptic, since it emphasises the ingenuity and collaborative nature of communities working together for survival. “We see the work as a trigger for other people to go off and develop our ideas further,” she says. 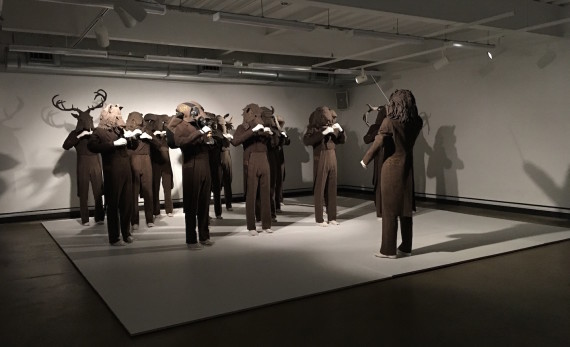 A new performance piece, Symphony for Absent Wildlife, has been commissioned by the university. The multi-media, “multi-sensory” work features a woodwind orchestra of 20 musicians, “spirits” who are dressed in a tailcoat and sculpted mask of an endangered woodland creature, all fashioned from reclaimed felt blankets. Each musician plays a hand-carved wooden bird whistle. After a crescendo, the symphony of birdsong ends abruptly, plunging the spirit-musicians into silent darkness. The performance has also been adapted as an installation, with mannequins replacing humans.

Since performance is such an integral part of their practice, what are the challenges in making a gallery exhibition? “We move from one to another,” Lucy, who acts as spokesperson for the pair, explains. “We see the gallery exhibitions as testing sites, if you like. That’s one of the reasons we’re setting up Symphony for Absent Wildlife in a gallery setting, to see if it functions in the way that it had done previously as a performance in a public space – we wanted to see whether it’s possible to generate the same emotions when there aren’t actually human beings in the suits.”

In addition to the centre’s programme of issue-led exhibitions, Michael Attenborough says he’s interested in expanding the possibilities of the new galleries, beyond the visual arts. “Really good venues have that quality of never quite making you know what to expect when you go there,” he says. “I’ve already tried to engineer relationships with various theatre companies.” 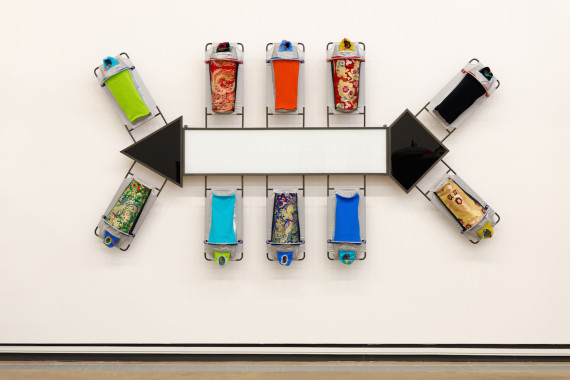 He says he would like to use the new space to bring the work of the Belarus Free Theatre, of which he is a trustee, to a new audience. The UK-based, underground theatre company, whose members have been subjected to persecution under the regime, is founded on principles of freedom of speech and artistic expression, and social justice.

The arts, sciences and arts activism seem part of the Attenborough DNA, so the Attenborough Arts Centre feels very much part of the family legacy. With his mission to found an arts centre outside London, Richard Attenborough was keen to make the arts as accessible as possible to new audiences. It’s clear his son intends to carry on that legacy as a hands-on patron. 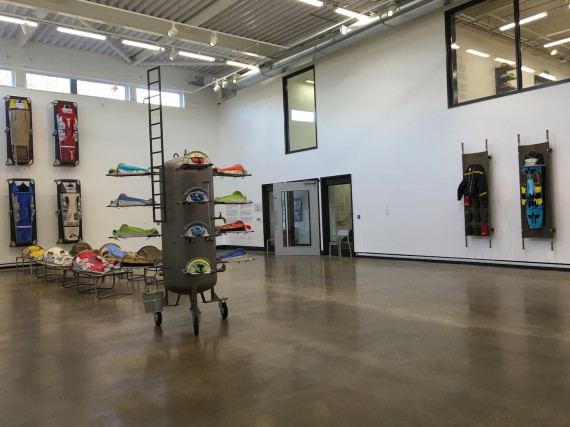