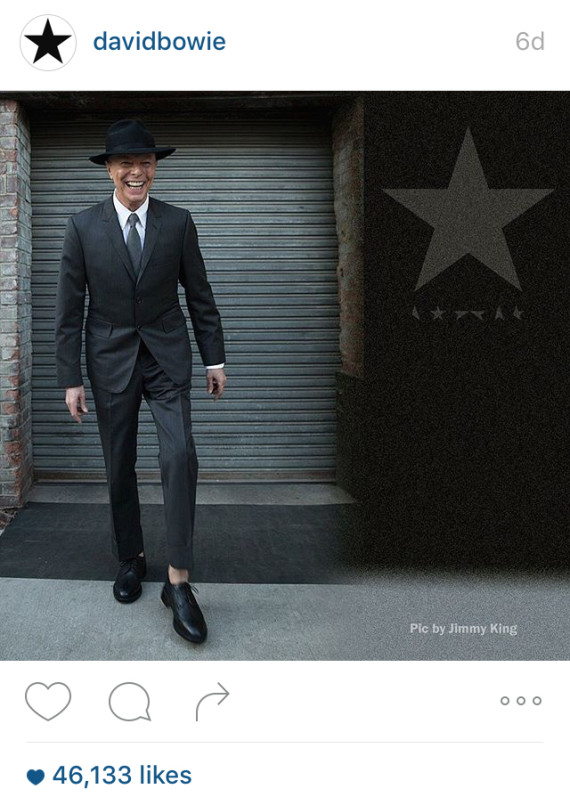 It’s a mark of David Bowie’s cultural impact and visual ingenuity that his unexpected death from cancer aged 69 is a loss to art as much as it is to music.

He was, after all, a musician whose grasp of the power of imagery, and the inseparable relationship between pop, art and fashion, was unrivalled. His impact on the visual arts and so many individual artists is undeniable.

His return to the pop fray in 2013 with The Next Day album, after ten years of silence, underlined the New York-based star’s engagement with the work of contemporary artists; the video for the single Where Are We Now? was directed by the artist Tony Oursler and shot at his studio in the Lower East Side of Manhattan.

Speaking in 2013, Oursler said of Bowie: “David would often come over to my studio to look at art or we would go to the Frick, the Whitney or other museums together… We talked about him coming over to my studio to perform in an art project because he has done that before and really enjoyed doing it.”

Bowie’s grip on the visual imagination of pop culture was highlighted with the March 2013 V&A exhibition, David Bowie is, which featured many of his stage costumes and other visual and archive material from his personal collection. The museum’s fastest-selling exhibition ever, it opened with a statement from Bowie, declaring “All art is unstable. There is no authoritative voice. There are only multiple readings.” The show has since toured internationally and is currently in the Netherlands.

Bowie’s relationship with art runs deep. He famously visited Andy Warhol’s Factory in 1971, meeting Warhol and performing his song, Andy Warhol, for him. Warhol, apparently, was at the time unimpressed and a little bemused by the then long-haired and wide-trousered singer.

In 1995, an exhibition in Cork Street, London, showed a collection of Bowie’s paintings from 1975-1995. Also in the ’90s, Bowie turned his hand to art journalism, interviewing and writing about a number of artists for the magazine, Modern Painters.

In 1997, he interviewed Tracey Emin to coincide with Sensation! at the Royal Academy.

Responding to an assertion by Emin that Britain was primarily a “literary-based” culture, he said: “I don’t agree with you there… I think that it’s a cliche that’s been thrown around far too much. I think we’re incredibly visually aware, actually. We always have been. I think that the history of British painting is extraordinary. Every century a great fist of brilliance has thrust through the old 16th-century repression…”

Not that any of this ‘extra-curricular’ activity is needed to demonstrate Bowie’s extraordinary impact on the visual language of so much of western pop, design and visual art culture. That can be seen in Aladdin Sane, Ziggy Stardust, the Thin White Duke, even the more straightforward pop imagery of his stadium filling Let’s Dance period in the early 1980s.

Crucially, there was ultimately no let up, no resting on laurels. While a self-enforced ten-year gap from making music after a heart attack saw him retreat from the public gaze, his return in 2013 was marked by another bold reinvention that fed off his past in order to create something new and rewarding.

With his final album, Blackstar, released last Friday (his 69th birthday), the inventiveness, the ability to surprise and intrigue, continues – both musically and visually. ‘The gift of sound and vision’, as he sang on the 1977 song from the Low album, was his to both give and take. His legacy is immense.