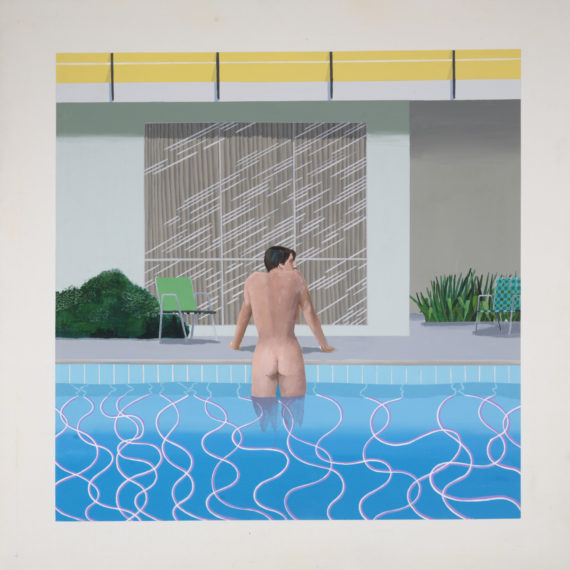 David Hockney rivals fellow Yorkshireman Alan Bennett in the ‘national treasure’ stakes. Back in the late 1960s and ‘70s, the salty northernness, the exuberant gay fashion sense, the bleached hair and the giant trademark specs (the look part nerd/part rock star) reduced him to a kind of kooky pop icon cartoon, easily packaged for high-art celebrity. This complemented the bright, easily digestible work no end. 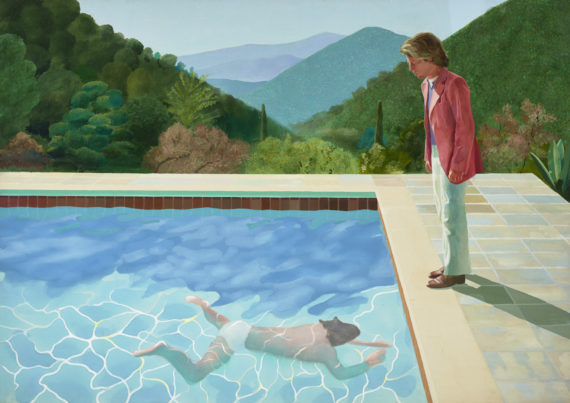 So it was really no surprise that success came quickly. And for over 60 years Hockney’s output has been prodigious, the best of his most recent outings in the UK a display of his joyous late blossoming Yorkshire landscapes at the Royal Academy in 2012; but among the worst, a series of 82 hastily painted, hum-drum portraits and a still life at the same venue last year, though this time in the smaller Sackler wing.

And so we come to the fastest-selling show in Tate’s history: Tate Britain’s retrospective presenting bite-sized chunks of each phase of Hockney’s expansive output. And yet you know that nothing, or very little, will come as a revelation, so intimately has the trajectory of his career been mapped out by museum directors and book publishers and documentary filmmakers at an apparently accelerating pace.

Still, one doesn’t expect to feel almost deflated at the start, for what a misstep to have a loosely thematic room as an intro. With six paintings spanning 1963 to 2014, you’re suddenly struck by that sinking feeling that you’re going to be all at sea for the rest of the exhibition, begging for the straightforward satisfaction of  chronology. 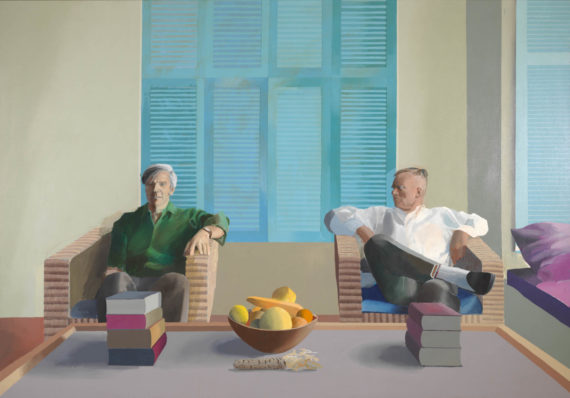 Here, the conceptual thread turns on his interest in sleight-of-hand illusions within an illusion, though there’s no panel text to guide you beyond a title label for each gallery (this is good, incidentally, and there’s an accompanying booklet which does the job nicely instead).

So here the gallery title is ‘Play within a Play’, after the 1963 canvas illustrating a hapless character trapped behind actual glass inside a painted stage set, with a curtain backdrop featuring Orientalist figures. But since mirrors and pictures within pictures and pictorial trickery is what preoccupies Hockney a great deal, why make heavy weather of it right at the start in a dizzying leap across decades, and with paintings of variable quality? 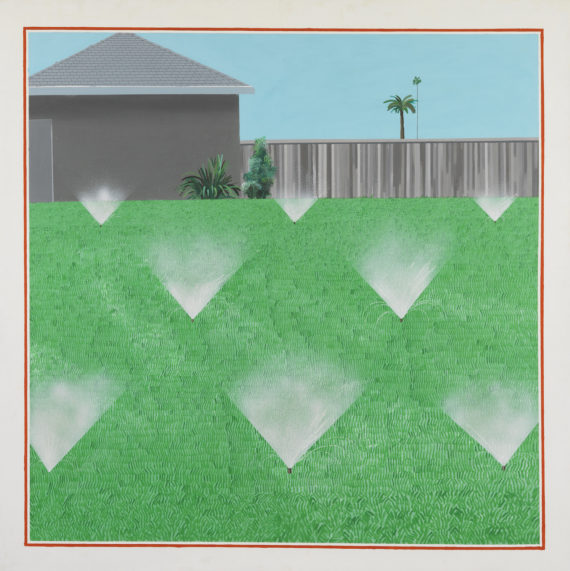 We Two Boys was painted while Hockney was still a Royal College of Art student and already sealing his reputation and fast-growing celebrity. Painted just a year later is Cleaning Teeth, Early Evening, featuring two blob figures with squirty Colgate toothpaste tube-penises, giving head with hungry, gaping-zip mouths. How much more upfront can you get?

The blue blob, puny next to the muscular, hirsute pink blob, is in chains, while a tube marked ‘Vaseline’ (only the first few letters are visible) peeps from under the bed. Streams of air appear to waft out of nostrils, suggesting exertion, though the figures are flat and static like a child’s drawing. The trope (by this stage surely a little tired) of the modernist’s faux-naïve take on children’s art has been amusingly and rudely subverted.

We sweep through the ‘60s and ‘70s with some of Hockney’s greatest and best-known paintings, including his double portraits, most famously Mr and Mrs Clark and Percy (1970-1) and the equally arresting Henry Geldzahler and Christopher Scott (1969). Here is the airy naturalism and ‘Habitat’ colours Hockney is known for. Yet these portraits are strikingly strange. The figures in his double portraits occupy the same domestic space, but often one figure appears rigid and mysteriously somnambulant. Naturalism edged with surrealism. 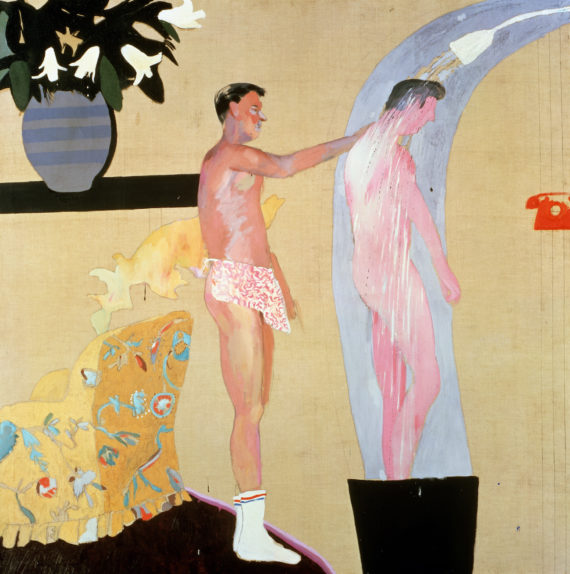 And in other ways too, the naturalism is strikingly stylised, such as we find in the bold diagonal stripes in white and aquamarine on a glass table. Unlike his art brut phase, the acrylic paint makes for flat, even surfaces where stain-like shadows suggest photographic light.

Under the hot, aspirational skies of LA, we also have the coolly seductive swimming pool paintings, the brilliant abstracted geometries of high-rise buildings, and the chic modernist dwellings belonging to Hockney’s art dealer friends. Some of these too, especially the high-rises (little-known in the UK) are among his best paintings.

But it’s difficult to endure much of the cubist phase of Hockney’s montaged Polaroids (though there are rare exceptions, such as his mesmerising composite portrait of fashion designer Celia Birtwell), nor the jarring, neon-coloured interiors and compressed, rearing landscapes of the ‘80s and ‘90s. These are the decades where we find Hockney, Britain’s long-distant national treasure, the most difficult to love.

So, when it came, it really was something of a brilliant surprise when the RA revealed the deeply ambitious canvases of his quiet Bridlington years. His late paintings of the Yorkshire Wolds in the gloriously heightened colours of the English seasons are both joyous and moving. What’s more, so are the surprisingly captivating iPhone and iPad drawings which end this sometimes difficult retrospective. 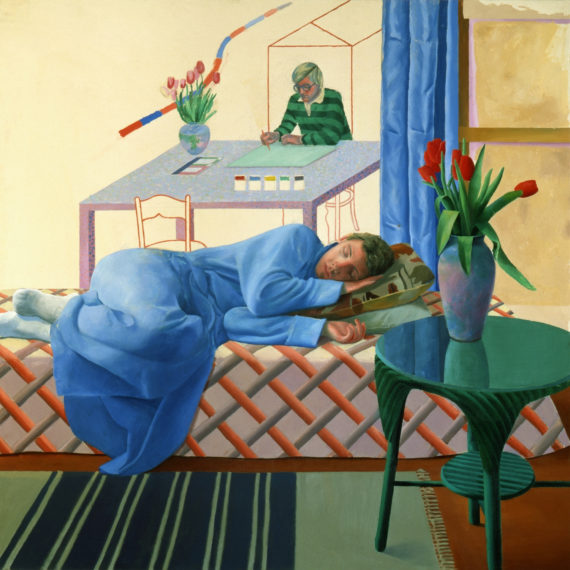 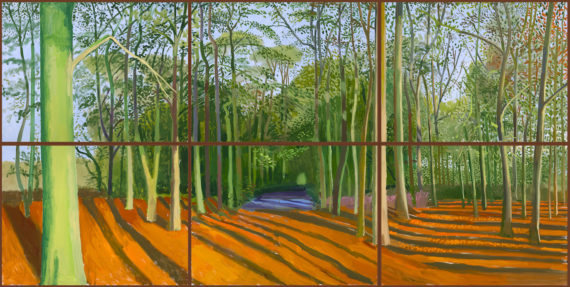