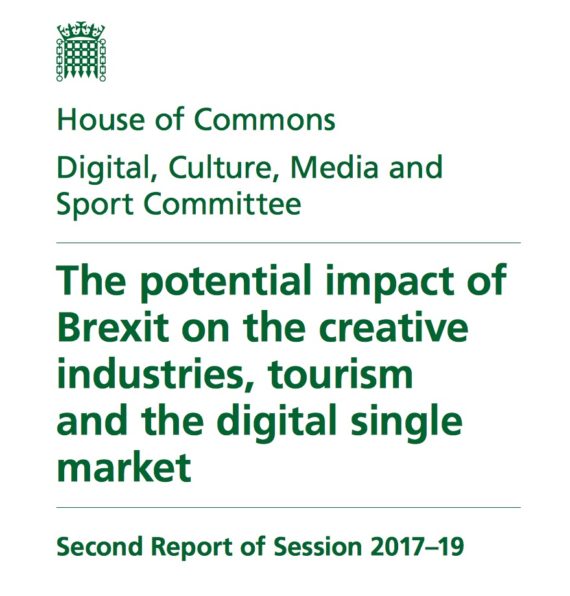 The Digital, Culture, Media and Sport Select Committee has published a report outlining its recommendations for post-Brexit travel for those working in the creative industries.

The document, which was produced following consultation with a number of organisations and individuals from the arts, endorses the principles of flexible travel for those working in the arts.

It features contributions from supporters of #FreeMoveCreate, a collaborative campaign founded by a-n The Artists Information Company and the Incorporated Society of Musicians (ISM) to protect flexible travel for artists, musicians, directors, producers and everyone working in the creative industries post-Brexit.

Supporters who contributed to the report include the Creative Industries Federation, Association of British Orchestras, DACS, Fashion Round Table and the British Fashion Council.

It backs a number of #FreeMoveCreate principles, including that ‘the government must heed warnings that SMEs (small and medium-sized enterprises) across creative industries and tourism will not have the capacity to manage a new system that foists additional bureaucracy upon them.’

It also recommends that the government explores ways in which commercial value, and value to specific sectors of the economy, can be factored into the UK’s post-Brexit immigration system.

It states: ‘Simplicity should be a key feature of the future migration arrangements that the UK will agree with the EU. In particular, the creative industries and performing arts need a system which complements the spontaneity that defines live performance.’

The report adds that the government should seek to retain free movement of people during any transitional period after the UK formally ceases to be a member of the EU in March 2019: ‘If the visa system is to change subsequently, an intensive and detailed process of consultation with all those affected will need to begin as soon as possible.’

The overwhelming message from businesses and organisations across the creative industries and tourism sectors was the importance of ‘retaining access to the talent they need from outside the UK, particularly as a large percentage of the international workforce supporting them is made up of EU nationals.’

For more information on #FreeMoveCreate and to join the campaign visit www.freemovecreate.org