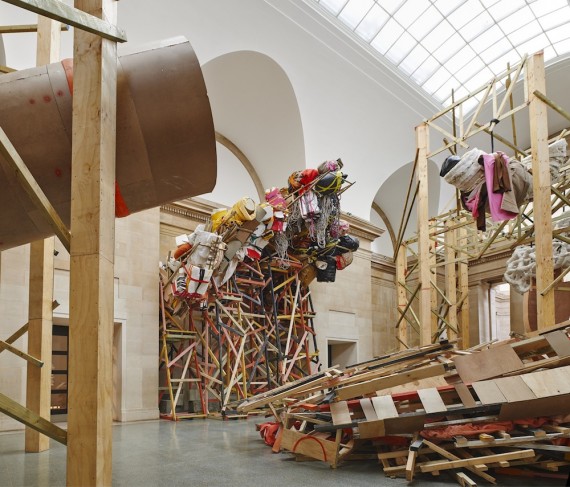 Edinburgh Art Festival has announced details of its 2015 programme. The annual festival will this year present over 40 exhibitions across more than 30 venues, including the first solo exhibitions in Scotland for Phyllida Barlow (at Fruitmarket Gallery), Hanne Darboven (Talbot Rice Gallery), Kwang Young Chun (Dovecot Studios) and Beatrice Gibson (Collective).

Alongside the work of established artists, the festival is showing its commitment to early career artists by launching a new open call for proposals, to be selected by a panel consisting of festival director Sorcha Carey and artists Christine Borland and Craig Coulthard. A minimum of three Scotland-based artists will be commissioned.

The festival’s annual commissions programme, this year titled The Improbable City, will also see new work from Charles Avery – who will be presenting a solo show at Ingleby Gallery – and Marvin Gaye Chetwynd, while Edinburgh Sculpture Workshop will be hosting a new exhibition from Toby Paterson, and Jupiter Artland sculpture park will present new work by Sara Barker.

There will also be two survey shows of Scottish art through the centuries at City Art Centre and The Queen’s Gallery, while the National Galleries of Scotland will present major art historical surveys including Lee Miller and Picasso, Dutch graphic artist M.C. Escher, 18th century portraiture by Jean-Étienne Liotard and Pop Art pioneer Roy Lichtenstein.

Elsewhere in the city there’ll be new work by activist duo kennardphillips at Stills gallery and Canadian artist Derek Michael Besant at Edinburgh Printmakers. Also new to the festival is the artist-run gallery and studio space, The Number Shop, which will be presenting a group show.

Carey said: “This year we are particularly pleased to be introducing so much international work to UK audiences for the first time. We are also delighted to continue our support of early career artists through a newly launched open call, which will provide support and an international platform for artists based in Scotland who are at the beginning stages of their careers.”