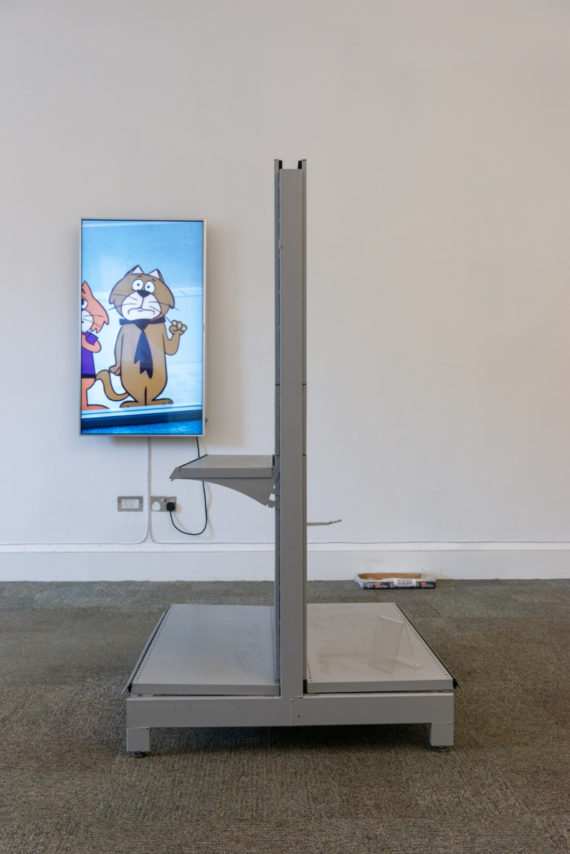 August in Edinburgh is a month-long rammie of trolley suitcases, snaking queues and drunken revelry. While much of the city’s public space is temporarily cordoned off in the interest of commercial enterprise, Edinburgh Art Festival’s Commissions Programme invites visitors to reflect on urgent political issues.

Many of this year’s new commissions draw attention to social and political struggle. Works such as Shilpa Gupta’s For, in your tongue I cannot hide and Adam Lewis Jacob’s No Easy Answers commemorate a political climate in which liberty and the right to free speech are often taken for granted while chaotic and careless consumption is the norm.

Edinburgh College of Art houses Gupta’s multi-channel sound installation. Whispering, chanting and singing voices recite snippets of text by poets who have been jailed for their writing or beliefs. Recorded poetry plays from dangling microphone-like objects hanging from the ceiling. Like waves, single voices roll into the voices of the many, as though the words of lonely imprisoned writers are being repatriated into a collective memory of incarceration that’s shared by political prisoners around the world. 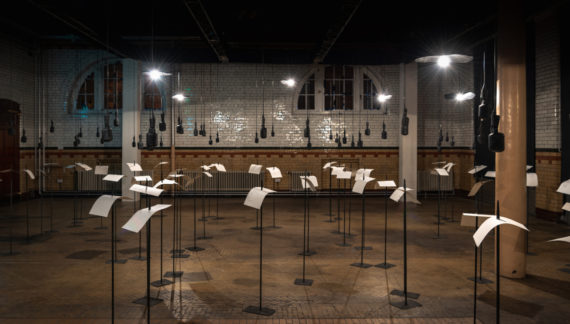 The content for No Easy Answers comes from Lewis Jacob’s childhood experiences of going to shopping centres with his nan. His three-channel video installation at the Institut Français d’Ecosse revisits the shopping centre as a functioning ruin. He looks critically at British national identity through consumer culture, creating a layered video composition of austere-looking paper clippings, voyeuristic footage of idle activity viewed through shop-front glass, and consumable objects selling themselves in shop windows.

The room is occupied by empty grey shop shelving salvaged from Maplin after it went into administration earlier this year. These objects have little charm and definitely no exuberance – they are cold, stark illustrations of commerce’s empty promises and a depersonalised consumer environment in which trading takes place in virtual markets.

Trinity Apse plays host to Ross Birrell and David Harding’s Triptych, a three-channel film documenting the Syrian Expat Philharmonic Orchestra and Athens State Orchestra performing Polish composer Henryk Goreki’s Symphony No. 3: Symphony of Sorrowful Songs – a lament that reflects on motherhood, separation and war. Filled with sound, the apse’s ecclesiastical architecture is designed to draw attention up into the vaulted ceiling and the arched red and blue windows flooded with sunlight, but the LCD triptych displaying the filmed concert hall performance competes for attention. 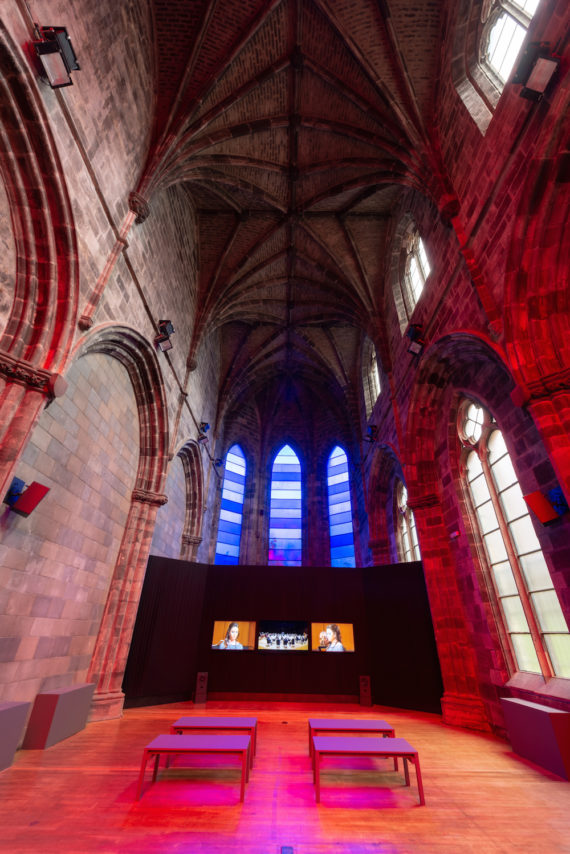 In Triptych, urgency and reflection are contradictory terms that appear in conjunction. While the words of 100 poets who have endured incarceration and sometimes capital punishment for their creative expression have a poignant weight, it is perhaps too early to romanticise the ongoing plight of the Syrian people and the catastrophic loss of culture still taking place. It’s the trauma that’s powerful, not necessarily the artwork.

Since 2015, Edinburgh Art Festival has supported emerging artists to develop new work for Platform. Housed at City Art Centre, this year’s artists Renèe Helèna Browne, Annie Crabtree, Isobel Lutz-Smith, and Rae-Yen Song present a range of thoughtful and humorous meditations on the subjective experience of inhabiting the body, the female body in particular.

Crabtree’s spoken narrative examines personal agency and physical pain. Drifting in and out of consciousness, she describes her experience of being anesthetised for surgery. Browne and Lutz-Smith give form to interior structures and processes: parts of the body that are usually invisible are heard talking and digestive processes plop out strange mushy-pea goo. Throughout the show, motionless visitors are sitting contorted into orthopaedic chairs with headphones on, looked over by Song’s colourful and exotic lion costume. 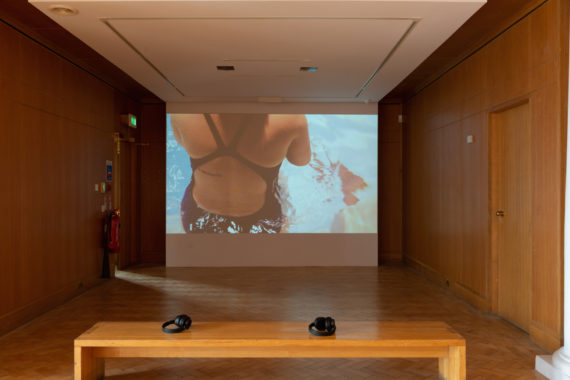 Tucked away at a table in Sandy Bell’s pub – well-known for its folk sessions and often frequented by musicians from near and far – two magicians are preparing to perform ‘socially-engaged magic tricks’ as part of Ruth Ewan’s ‘Sympathetic Magick’, a collaborative project she has devised with Marxist magician Ian Saville.

Saville, who often performs at Labour events and on picket lines, says: “Whereas David Copperfield is content with little tricks like making the Statue of Liberty disappear, I aim at the much more ambitious goal of making International Capitalism and exploitation disappear.” He proceeds to eliminate class struggle using three pieces of red rope of unequal length while a small group of pub goers look on pint-in-hand with their mouths agape in wonder.

Billy Reid, a Glasgow-based magician, performs a card trick to Dick Gaughan’s Workers’ Song, a rabble-rousing tune recorded in 1981 and sung from the perspective of all labourers who are ‘expected to die for the land of our birth, even though we’ve never owned a handful of earth’. His hands deftly reveal a flow of images Ewan has made depicting scenes from the anonymous worker’s life.

The small crowd finally disperses after watching this trick three times over, leaving with the reminder that political action can also be inspired by bringing humorous and light-hearted optimism into the world. A little sympathy and magic goes a long way.