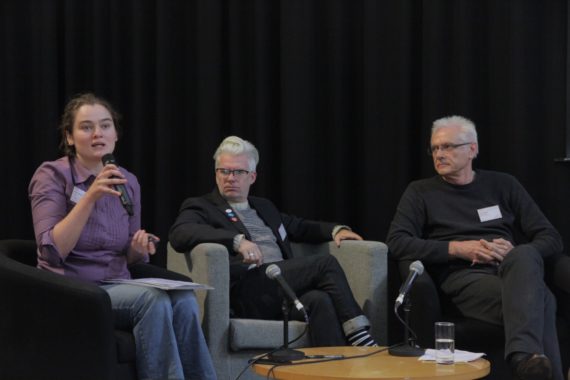 A crowd is gathered outside the Cornerstone Building of Liverpool Hope University. “Long live art!” it cheers in unison, “Long live activism!” This ‘Spoken Choir’ is Freee collective‘s contribution to the 2016 engage International Conference, a two-day event themed around art and activism.

Together, the gathered gallery educators, artists and teachers are reading aloud Freee’s open letter to the conference. Instructed to join in only when they support the sentiment, the letter ranges from celebrating the conference for its ‘advocacy of activism’ to questioning whether it ‘dilutes activism for… institutional targets’. At times only a few voices remain, at others a mass of delegates offer their endorsement.

Engage, the National Association for Gallery Education, has gathered colleagues to debate these dilemmas, and to consider best practice in gallery education and arts activism. Under the banner ‘Whose Art? Our Art!’, on the table are questions such as ‘Where does art stand within education’; ‘How can the arts improve social cohesion?’; and ‘What is art activism in 2016?’.

With topics like this, says engage director Jane Sillis, it is no coincidence that this year’s conference is in Liverpool. The city, she continues, has a rich heritage of art and radical education woven into its fabric. Making the most of this, fringe events explore the Liverpool Biennial in its final week; make a stop at Metal, an art gallery set in the world’s oldest passenger train station; and discover Bluecoat, the country’s oldest art centre in a school building some 300 years old. 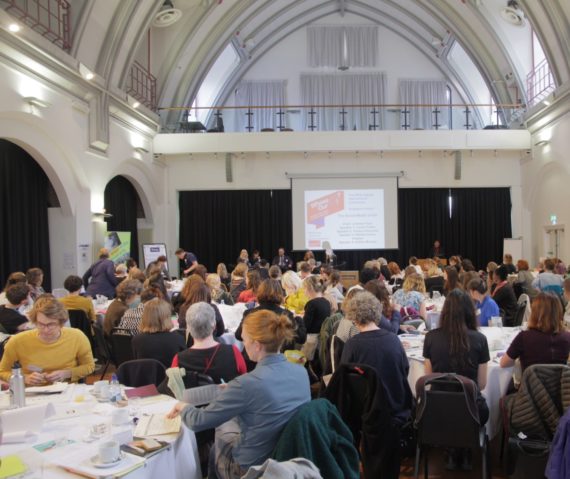 The axis of the event, however, is the series of talks, provocations and panel discussions. Declaring the conference open for business and striking a prevailing defiant note, Christine Mathews-Sheen, programmer of this year’s event, issues a call to arms. Quoting Samuel Beckett, she urges colleagues to take every opportunity to “do something, while we have the chance”.

The uncertain future of arts education springs up throughout many of the talks. Sally Tallant, director of Liverpool Biennial, sketches a landscape in which “soft subjects” are increasingly marginalised. The Association of Art Historians uses the ‘Delegate Soapbox’ platform – which offers five-minute slots for organisations to introduce their work – to bring into focus the axing of the Art History A-level.

Mike Fairclough, however, is more optimistic. Head teacher of West Rise Junior School, he urges colleagues across the sectors not to “wait for permission” to inject creativity into their work. By way of example he introduces them to Room 13, a student-run arts studio hosting artists in residence at his school. Projects like this, he suggests, offer pockets of opportunity for the arts to be directly employed alongside the mainstream curriculum.

Anna Galkina’s overview of Platform’s successful campaign to rid Tate of BP’s sponsorship through disruptive acts in the gallery certainly suggests as much. Liverpool artist Nina Edge’s net curtains, hanging in a street threatened with demolition and embroidered with the words ‘Nothing is private’, speak of a more understated approach. 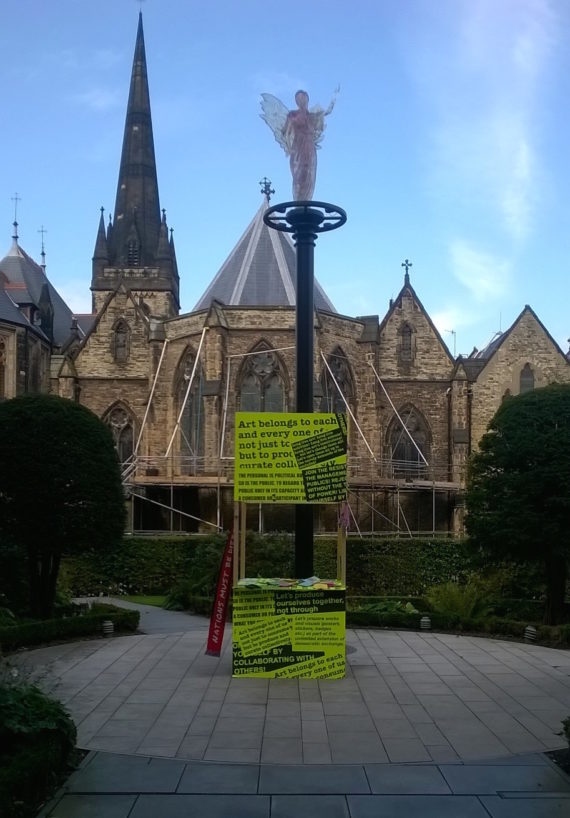 Dave Beech, Freee collective member and professor of art at the University of Gothenburg, throws a spanner in the works, however. “I can’t quite endorse art activism,” he says. He finds fault with the setting of objectives and agendas, and art activists working to achieve a specific goal.

Instead, Freee “experiment with formats of political exchange”. As well as their open letter, Freee have brought to the conference a kiosk wielding placards declaring ‘Art belongs to each and every one of us’ and ‘Borders are for crossing’. It acts, says Beech, as a “prop for conversation”, and from it delegates help themselves to a smorgasbord of zines with titles such as Economists are wrong! and The Manifesto for a new Public.

Cardiff-based artist Rabab Ghazoul – the conference’s keynote speaker – also shies away from ‘art activism’. “I do not call myself an activist,” she says. While her practice addresses issues of power and touches on the political, she, like Beech, is always keen to “step back” from any overt political agenda or objective.

In her 20-minute talk, Ghazoul whisks the conference through a potted history of her career, illuminating how her practice offers a “contemplative, reflective space” to consider “macro currents of the political”. She wants, she says, to “throw up awareness”, and finishes her talk with a quote from Raymond Williams: “To be radical is to make hope possible and despair less convincing.”

Putting into practice what has been preached, Lindsey Fryer (head of learning at Tate Liverpool) leads an interactive session, turning audience members into participants. Up for discussion is the question of how the arts can improve social cohesion. She invites her speakers into the role of provocateur. 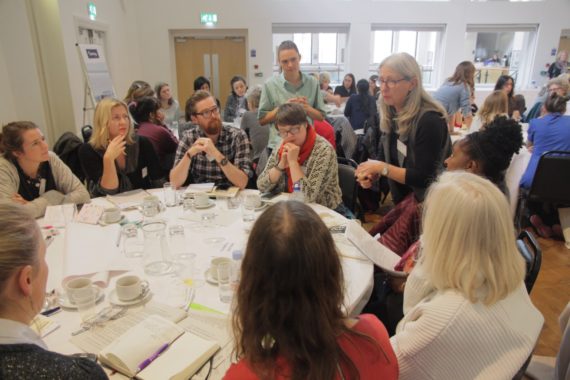 Director of Super Slow Way Laurie Peake questions whether arts activists, in their various guises, should spring into action in the face of crises, or take time to contemplate. She asks the conference to consider: “Should I stay or should I go now?” Viviana Checchia of CCA Glasgow questions why we need “art” in “socially engaged art practice” at all.

Following these provocations, 15 minutes are given over to delegates to answer the questions and feed back to the conference. Confusion over the format, however, hindered the session. Freelance artist Jo Plimmer ironically found in the exercise the hallmarks of an unsuccessful community arts project. “At the beginning,” she notes, “I was excited to participate, but as it went on I was less sure.”

Bubbling round the main conference, a series of intimate break-out sessions provide space for in-depth discussions of specific issues under the umbrella of ‘arts and activism’.

Tate Liverpool hosts a discussion on ‘The Civic Role of Cultural Organisations’ and an introduction to the work of DaDaFest, Bluecoatʼs programme of activity with and for people with learning disabilities. At the Everyman Theatre, Polly Brannan of Liverpool Biennial introduces the 2016 festival’s ‘children’s episode’ , where artists were invited to make art with and for children, making children the primary audience.

A break from debate and discussion came in the form of the ceremony for the Marsh Awards for Excellence in Gallery Education. These awards, a partnership between Marsh Christian Trust and engage, celebrate the achievements of individuals working in learning and education within gallery or visual arts contexts.

Ben Thomas of the Arnolfini was recognised for his work promoting collaboration between students and practicing artists, while Emma Kerr of the Roche Court Educational Trust received her award for work involving state schools in galleries. Other awards went to Kenn Taylor for The Tetley’s After School Art Club and Adele Patrick for Glasgow Women’s Library‘s Lifelong Learning programme. Merilee Mostov of Columbus Museum of Art was recognised for ‘taking risks that other curators could not’.

During her keynote speech, Rabab Ghazoul was asked if she ever felt her projects reached a definitive end. Her answer was an unequivocal “No!” When a project by nature is about striking up relations, asking questions and starting conversations, she replied, it is always ongoing. Likewise, engage 2016 only just began the task of exploring the fertile terrain of arts and activism. Among the many panels, breakout sessions and fringe events, however, the real legacy of the event was ensured: existing networks were fortified and new networks found.