Five years of David Dale Gallery: "I didn't expect it to be going for so long" - a-n The Artists Information Company 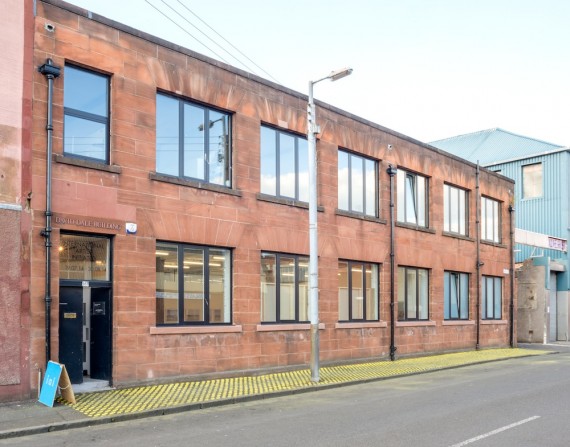 “I didn’t expect it to be going for so long, but I didn’t ever envisage an end point either – it’s one of those things where you don’t think it will be five years but you don’t know when it will finish.”

Max Slaven is thinking about how David Dale Gallery & Studios came to be half a decade old. One of three founding directors along with Ellie Royle and Ralph Mackenzie, Slaven is speaking at the Glasgow space in the city’s east end ahead of a month-long show to mark this milestone in the organisation’s history.

The idea for the gallery and artists’ studios was initiated while all three were still students, in their final year at Glasgow School of Art in 2009. “Originally the plan was to have a place to work in which we could continue in the peer group environment that we’d become accustomed to at the art school,” says Slaven.

Thanks to an ambitious, internationally-focused exhibition programme, the space – which takes its name from the building’s original use as the David Dale College – has become much more than that.

While there are 18 artists’ studios on the second floor, the gallery has made an impact in its own right, working with artists from across the world and, in some instances, providing UK and Scotland debuts.

The fifth anniversary show will feature work by around 90 of the 104 artists the gallery has worked with since launching its exhibition programme – and Slaven isn’t entirely sure what will be in it.

“A big part of it is that I don’t know what the work will be – I’m quite happy to find out when it happens or when it arrives,” he explains. “Because I don’t know what will arrive in the next few weeks there won’t be a cohesive plan for install, it will be more like join the dots.”

Titled Finite Project Altered When Open, the show takes its cue from American conceptual artist Robert Morris’ 1969 exhibition, Continuous Project Altered Daily. It will, to some extent, be a case of exhibition making as performance, with the show taking shape over the coming weeks. Rather than the usual preview, there’ll be a closing party to celebrate its completion on Saturday 4 July.

“I will open at 12 o’clock on Saturday [6 June] with an empty gallery,” says Slaven. “Then I’ll start installing.”

What can you tell us about the fifth anniversary show?
I think out of 104 invited, there’s 87-90 included in the exhibition – so it’s not an exhaustive list but it’s the majority of artists that we’ve worked with. Some people have been in touch to discuss ideas and to talk about logistics, and there has been some work – either instructional or physical – already sent through. So for example the Swiss artist Kilian Rüthemann – who we worked with in 2012 – has an instructional piece which he’s passed on to us. The instructions are: ‘A 1m 20cm flourescent tube is siliconed to the wall and then smashed’ – so all I need to do is follow the instruction I’ve been given.

Leo Fitzmaurice has given instructions too: ‘A square on the wall is painted with grey floor paint and then a corresponding square on the floor is painted with white emulsion wall paint.’ The Grantchester Pottery have given me something to wear or to drape as I see fit while working away – I think they particularly want me to wear it at the closing party, where they’ve also instructed that I serve Manhattans. It’s quite vivid apparel – I’ll definitely cut a dash!

There’s also been quite a lot of digital films and digital prints that have been sent through, which we’ve to project or print. And there are other physical pieces – for example Risa Tsunegi has sent through a drawing from Japan and Ciara Phillips gave me a large screenprint on fabric last week. The idea I’m going to try and pursue is that they’re installed vaguely in sequence from when I received them; I’ve got my list here, but there’s a lot more due to arrive.

Why did you set David Dale Gallery & Studios?
We set it up just as we were graduating in 2009, we were all final-year undergraduate students at Glasgow School of Art, so we were all starting to make plans for after we graduated. We were used to working at close quarters with friends and we were worried about losing that, so the first idea was about having a space to work with other people. The first building we found, which was around the corner from where we are now, had a large open-plan space when you first entered which ideally lent itself to presenting projects. As the programming of the front space developed, that’s what we became more interested in and it took up more and more of our time.

Did you envisage it as a short-term or long-term project?
I don’t think we really considered it either way. It definitely wasn’t set up with an end point; it was very open ended and as we’ve become more engaged with the gallery practice itself, it’s lent itself to being here so long. Also, we feel a responsibility now because it’s artists’ studios as well; you would potentially be displacing 18 artists who rely on the building if the project ended.

What’s the relationship between the gallery and studios?
The separation of the two was built in from the start. We were very conscious of the perceived legitimacy of the gallery programme – we felt it was necessary to make sure it was understood as separate from the studios, so there was not a parochial, insular atmosphere and people weren’t able to dismiss the gallery programme by going, ‘Oh, that’s just a studio artist, that’s just their friends.’ We wanted to exhibit people we’d not worked with before, people we didn’t know. Apart from a members show at the very start, we’ve only shown one studio artist [founding co-founder Ralph Mackenzie, who ceased being a director last year], and he was selected by a guest curator. We do work with studio artists for offsite projects though – the last one was in Copenhagen.

Where does David Dale fit in to the visual arts ecology in Glasgow?
We’re primarily working with early career artists and it’s an international-focused programme, 60-70% being internationally-based. So, rightly so, it doesn’t really fit in tandem with any other organisation because we feel that we’re filling a gap in provision. Having the studios creates a community around the gallery, which is really important for discourse and for the audience as well. So when we do show Glasgow/Scotland-based artists in that international context it’s all the more benefit to the artists involved. Which is another reason why we became internationally focused – we’re showing things that aren’t necessarily getting shown, and that’s the idea.