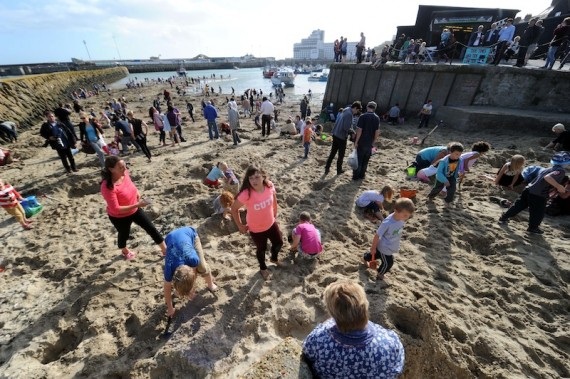 Folkestone’s harbour beach has been alive with activity over the weekend following the opening of the Folkestone Triennial and Berlin-based artist Michael Sailstorfer’s participatory artwork, Folkestone Digs.

With the help of Bristol public art producers Situations, Sailstorfer has buried 30 individual pieces of 24-carat gold on the beach. The dog-tag sized bars, which come in 10 and 20 gram weights, have a current combined market value of around £10000. A number of the bars have already been found.

Triennial curator Lewis Biggs, speaking to The Guardian, said of the work: “It is about people coming to the beach and digging and possibly finding hidden treasure. Some people will get lucky, some people will not get lucky – and that’s life.”

Biggs has also raised the question of how, once found, the pieces of gold will be valued. Will they have the market value of gold or will the fact that they are part of an artwork mean they should be valued as art? Or as Biggs put it: “Do you take it to the pawnbrokers or do you take it to Sotheby’s?”

Gold diggers of all ages

As a work of participatory public art, the piece has attracted a wide age-range already, with the beach – which can only be accessed at low tide – packed with children, their parents and older gold diggers.

Situations director Claire Doherty sees the piece as part of the organisation’s work to change perceptions of what public art can and should be, and in particular the value of temporary, rather than permanent, public realm artworks. She said: “Sometimes a temporary project can have as much impact in the collective memory as something that has been there a long time.”

Sailstorfer is not in Folkestone to witness the public’s reaction to his work – although with widespread international media coverage and a Twitter hashtag of #folkestonegold he’ll have no problem keeping up with all the activity.

And while there have already been local media stories about people finding the gold, there is the very real possibility that we’ll never know if all the treasure has been found – that, as Biggs says, this temporary work could in fact last forever. After all, not everyone will leap for joy when they strike gold – some will simply smile quietly to themselves as they hang up their bucket and spade for the day.