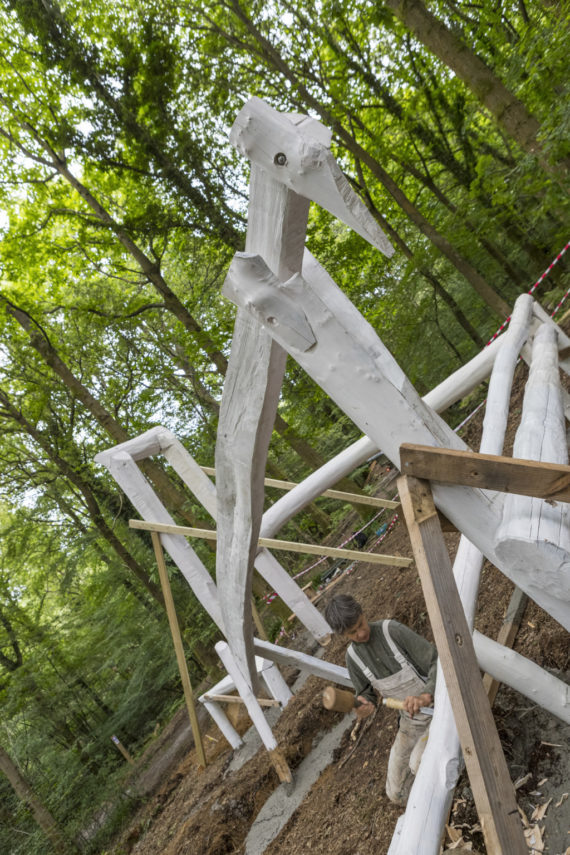 The Forest of Dean Sculpture Trail is celebrating 30 years of commissioning contemporary artworks with the unveiling of two new permanent commissions by Henry Castle and Pomona Zipser. 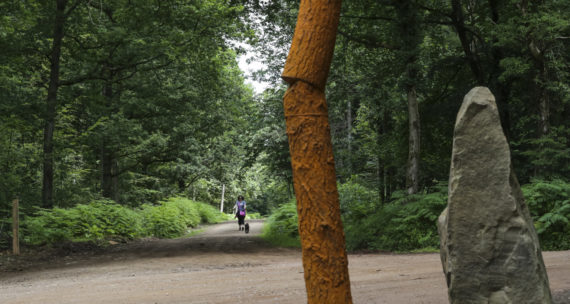 Castle’s Coal Measure Giants explores the Forest of Dean’s geology and its industrial and sociological history through two sculptures placed 300 metres apart. The sculptures act as markers, measuring the depth of the coal seam that lies directly below the forest. 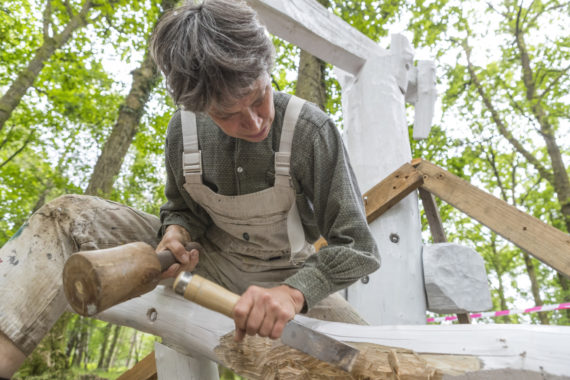 Berlin-based Zipser’s commission takes the form of a structure from which to contemplate and observe the ever-changing nature of the forest. A collaboration with local artists and craftsmen, Yaşasin was handcrafted from a sweet chestnut tree felled on the site.

The two works join earlier commissions by Andrea Roe and Onya McCausland, which were installed in the forest earlier this year.

Andrew Stonyer, Chair of the Forest of Dean Sculpture Trust, said the four commissions represent “a fitting reflection on the Trail’s 30 year heritage of creating artworks that seek to reveal the Forest of Dean’s hidden histories.”

The commissions were unveiled as Arts Council England and Forestry Commission England announced a new four year partnership to expand and extend the reach of their Forest Art Works programme.

The new partnership, from 2016-2020, builds on the success of an initial Memorandum of Understanding between the two organisations in 2012. A new Memorandum was officially signed last week when Arts Council England’s Chief Executive Darren Henley visited the Forest of Dean Sculpture Trail.

The Forest Art Works programme has so far included Jerwood Open Forest, a national open call for ‘bold, broad-thinking proposals that explore the potential of forests as sites for art both in and about the environment’, and projects such as In the Eyes of the Animal, a 360 degree virtual reality experience created specifically for Hamsterley Forest, County Durham, through a partnership with Abandon Normal Devices festival.

Speaking about the partnership, Henley said: “Arts interventions in the natural world create a fresh dialogue between artists, the environment and our communities.

“They can be exciting and surprising, and help people see the world in new ways. The development of a long term relationship with Forestry Commission England gives us exciting new opportunities to help people experience this, wherever they live in the country.”

Simon Hodgson, Chief Executive Officer, Forestry Commission England, added: “We have had great successes from our previous partnership proving that woods and forests are an important part of England’s cultural history and it is important that they are a part of our contemporary arts.